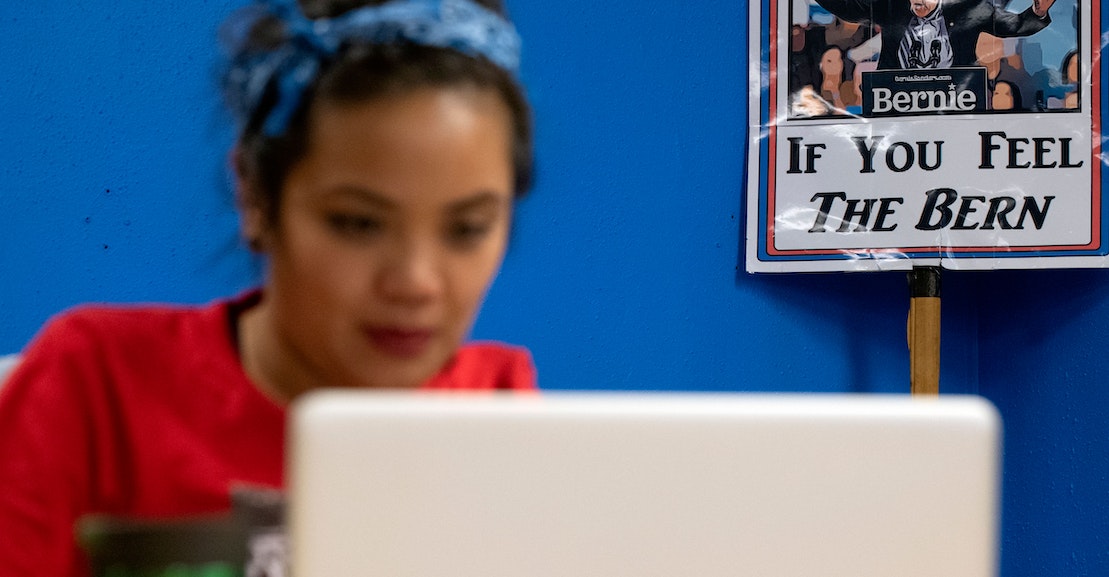 “I get it,” Mondaire Jones says into the camera, shaking his head. He is speaking on a Thursday night four weeks out from the election, to the virtual audience of a virtual rally hosted by Our Revolution, the PAC created by Bernie Sanders after his first presidential run in 2016; someone has just asked him about Joe Biden. Fresh off a primary victory in the wealthy, largely white suburbs of New York, Jones, who grew up in Section 8 housing in his district, is poised to become the first openly gay Black member of Congress. He got there on a platform of policies that Sanders championed and that Biden has largely rejected—measures like a Green New Deal and Medicare for All. So he opens with a proviso: “None of us … had Joe Biden as our first choice.” Still, he goes on, “I can’t do any of the things that I ran on without electing him president.”

In a post–Bernie Sanders electoral field, candidates like Jones and groups like Our Revolution face the awkward double-step of having to throw their support and organizational capacity behind a presidential candidate who has repudiated many of the broad social-democratic programs and working-class politics that they stand for. They are under no illusions about the odds of a Biden presidency suddenly pivoting to enact a bold progressive agenda. Instead, grassroots organizers on the left who found an ideological home in the Sanders campaign, as well as a sizable number of former Sanders operatives themselves, are all now in the position of fighting like hell to elect their own opponent.

The move may feel emotionally fraught, but the path is straightforward from a strategic perspective. “Voting is a tactic, period,” said Winnie Wong, a veteran of the Occupy movement and a former political adviser to Sanders. Wong is now a part of Vote Trump Out, one of a handful of campaigns devised by yet more Sanders staffers in the wake of his primary defeat. For those behind Vote Trump Out and its sister project, Not Him, Us (a play on Sanders’s own slogan, “Not Me, Us”), there is no question that defeating Donald Trump is necessary to realize any one of the majoritarian policies that Sanders ran on. As Jonathon Smucker, an organizer with Not Him, Us, put it, “For us to get anywhere, to put demands on the system, we need to have someone who is at the very least vulnerable to our pressure. Donald Trump is not vulnerable to our pressure.”

On November 4, organizers will wake up and see whether their ground game paid off; whether, in the days or weeks that may be required to count every vote, they won or lost. But the campaign is also bigger than one election: No matter what, the outreach, deep organizing, and local conversations about stakes and power they will have engaged in are precisely the kind of turnout strategy that Sanders tried to build but that organizers rightly observed will take longer than the course of one campaign cycle. That work has to penetrate deeper, pull more people in, and construct a coalition that strategizes and fights in all the battles to come. In the end, for many on the left, this moment, which has been billed as a once-in-a-lifetime event and a singular showdown between good and evil, is really about the essentially timeless work of building power.

Even if the electoral strategy is clear, the marketing campaign is more subtle. Many of those on the left who are waging collective struggles suddenly find that their short-term goal—evicting a fascist from the White House—aligns with the goals of the Democratic establishment. This presents something of a rhetorical challenge as they try to mobilize voters who see the party as lacking credibility and who were attracted to the Sanders campaign for this very reason. The crucial difference, these organizers insist, is that while party elites would have us vote Biden into office and then spend four years placidly receiving whatever milquetoast program he sees fit to roll out—you’ll see this articulated most explicitly by pundits fantasizing about a post-Biden return to a previous state of passive bliss—those agitating for climate justice or student debt cancellation see Biden as a brief detour on the long path to transformative politics, not an end unto himself. “This is necessarily a two-step campaign,” Dan Sherrell of Vote Trump Out told me. As the name of his organization would suggest, ending the current regime is the first step. The second step is to take position so that the moment Joe Biden steps into office, he finds a well-organized coalition breathing down his neck.