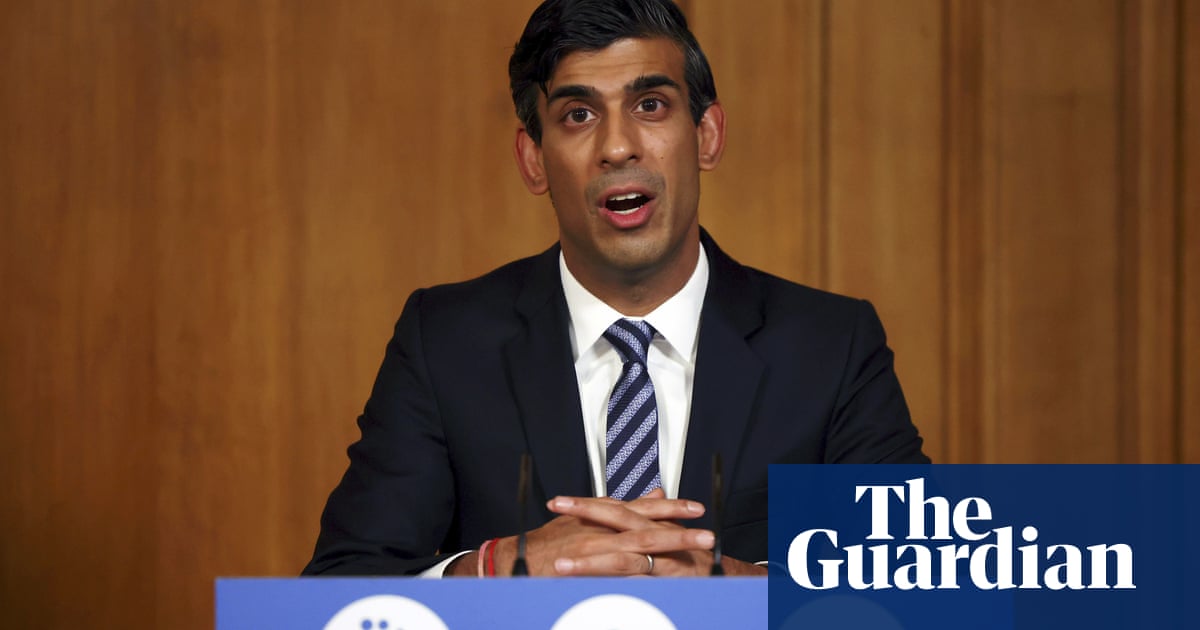 Almost half a million self-employed workers have been “left in the lurch” by government support covering just two-fifths of their normal income despite the launch of tougher coronavirus restrictions, Labour has warned.

Changes to the coronavirus job support scheme in England explained

According to the Labour research, an average self-employed worker in the arts or hospitality sector will get just £450 a month from the Treasury’s self-employed income support scheme (SEISS). This is half the level during the first lockdown.

The party estimates half a million self-employed people work in sectors of the economy that are either shut or struggling under the weight of new Covid-19 restrictions.

The Labour criticisms came after Sunak announced a multibillion-pound expansion of job support for businesses, employees and the self-employed on Thursday amid mounting pressure on the government to act.

As much as £3.1bn is being made available to self-employed workers, increasing the value of the grants they can access to cover lost income from 20% to 40% of average monthly profits. However, this is half the level available during the first lockdown, when 80% of average profits could be claimed.

Ed Miliband, the shadow business secretary, said: “The promise of doing ‘whatever it takes’ to protect workers is a distant memory. Despite public health restrictions tightening and many sectors being shut, ministers are leaving self-employed people in the lurch.”

The Labour analysis comes after figures from the New Economics Foundation showed 450,000 jobs would still be at risk of redundancy this winter, despite Sunak’s latest support measures.

Experts warned millions more would also slip through the gaps in the government safety net. They include:

Derek Cribb, the chief executive of the Association of Independent Professionals and the Self-Employed, said a record 250,000 self-employed people had fallen out of work since the start of 2020. “With large parts of the country locking down again, this is only set to worsen as many forgotten freelancers face financial devastation. Government must act now and open up SEISS or other targeted support to these groups,” he said.

Labour estimates 177,000 self-employed people work in the creative, arts and entertainment activities – including theatres, festivals, live music and events, which are predominantly closed.

Operators of pubs, music venues, conference centres and other social hubs – as well as their suppliers – which have not been forcibly closed by the state, will be ineligible for the “job support scheme: closed,” which pays two-thirds of wages. They may also struggle to keep staff on for the minimum 20% of hours to benefit from the new “job support scheme: open”.

As many as 1 million people work in the leisure, food and drink sectors outside tier 2 and 3 areas that could fall into this category, according to Dan Tomlinson, senior economist at the Resolution Foundation. “Even in areas where restrictions are light, you’re still going to be struggling to do some of these things like open your conference centre or music venue,” he said.

Michael Kill, chief executive of the Night Time Industries Association, said 700,000 jobs could be lost at pubs, bars, restaurants, nightclubs and other venues by the end of the year despite the new support package. “Yes the job support scheme expansion will help to a point, but the key thing is whether companies can backtrack on redundancies, because of the late timing of the announcement. It’s two or three weeks too late,” he said.

The original furlough scheme paid 80% of normal wages, however, the new job support schemes will only cover two-thirds. While some firms will top up pay, many won’t. Alex Chapman, a consultant at the New Economics Foundation, said moving from the furlough scheme to the JSS could lose a worker on average pay about £87 a month.

Frances O’Grady, general secretary of the TUC, said: “The chancellor should have increased support for all workers to at least 80%. And we still need decent sick pay for people forced to self-isolate.”

Sunak has been criticised for waiting too long to announce the new package of support. Official figures show redundancies increased at the fastest rate on record this summer as the furlough scheme was wound down.

The number of people claiming unemployment-related benefits has risen by 120% to more than 2.7 million. Although Sunak raised the value of universal credit by £1,000 at the start of the crisis to help those falling out of work, the measure is temporary.

Critics said the chancellor could have guaranteed a higher level of benefit support would be continued next year. Carys Roberts, director of the IPPR thinktank, said: “Fixing this would address a huge social challenge but also help stabilise the economy during the recovery.”