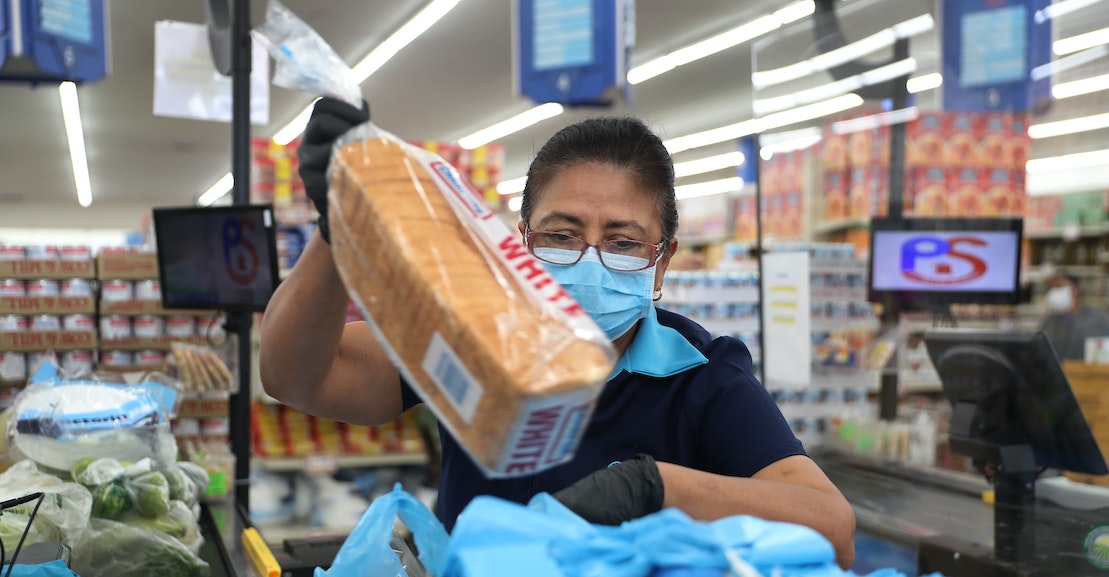 Over the past few weeks, when Diego Isaacs hasn’t been at his job in the produce department at the grocery store Harris Teeter in Charlotte, North Carolina, he’s been busy contacting as many people as he can about the upcoming election. Isaacs, an immigrant from Colombia who’s lived in the U.S. for 20 years, said he’s lost count of how many people he’s encouraged to vote this year, but has spoken to relatives and friends in Wisconsin, Florida, Georgia, and elsewhere who are, like himself, retail and service workers. “The issues that really matter to me are the economy and health care,” he said.

Last spring, when the pandemic hit and states locked down one by one, a significant portion of the low-wage workforce was quickly—and conveniently—reclassified as “essential” and sent back to work while much of the rest of the country took shelter at home. In New York, handmade signs thanking frontline workers started appearing in windows, and residents applauded daily for the people putting their health and lives at risk to keep food on the shelves and hospitals staffed. These newly minted essential workers quickly became irresistible fodder for politicians; both the Democratic and Republican Party paid homage to them at their respective national conventions in August. (“You represent an incredible group of people and we love you all,” Trump said to a group of essential workers he had convened in the White House to kick off the Republican National Convention.)

But recognition isn’t the same thing as power. Despite effusive praise from politicians and the public, these workers, across a number of industries, continue to face PPE shortages and unsafe conditions on the job, and hazard pay bonuses have all but vanished even though the threat of the coronavirus hasn’t. To date, there is no centralized system for monitoring the toll of the pandemic on essential workers, but according to a tracker created by the Guardian, more than 1,200 health care workers in the U.S. have died of Covid so far. Another recent study found that up to a quarter of all MTA workers in New York have contracted the virus, and among those, 131 have died; as of last month, the USPS reported that over 9,600 employees had tested positive and 83 people had died since the pandemic began. And more than 200 workers at meat packing plants—which were early, overcrowded sites of Covid outbreaks—have died, with little recourse for their families or penalties for their employers.

We’ve now seen firsthand that despite the ongoing risks to their own safety, this workforce, which currently comprises over 55 million people, has the ability to keep the economy running—or conversely, make it grind to halt—which means that in an election year, it also has the potential to shape the outcome of national and state-level races. But whether this diffuse group of workers will cohere as a voting bloc in a country with low union density—not to mention relatively low voter turnout—is far from guaranteed, particularly within a political system that has tended to take them for granted.

In early September, in an effort to alter this balance of power, the retail workers’ organization United for Respect launched Vote for Respect, an initiative designed to galvanize and turn out what one could call the essential worker vote. According to the group, more than 3,350 workers, including Isaacs, have been working through the initiative to mobilize their coworkers, friends, and family members to the polls. Rather than officially campaigning for specific candidates, the group is hoping to turn out 150,000 low-wage workers across several critical swing states, and 150,000 more throughout the rest of the country, as the first step in forging a long-term coalition of low-wage and frontline workers that has the leverage to demand better workplaces and a fairer economy even beyond the 2020 election. Mario Crippen, a former Amazon employee who co-organized a walkout at a Michigan warehouse in March over unsafe working conditions and is now an organizer with Vote for Respect, sees the election as an opportunity to build electoral power alongside the kinds of campaigns workers are waging inside their own workplaces during the pandemic. “We’re the driving force in this country—we make America turn,” he said.