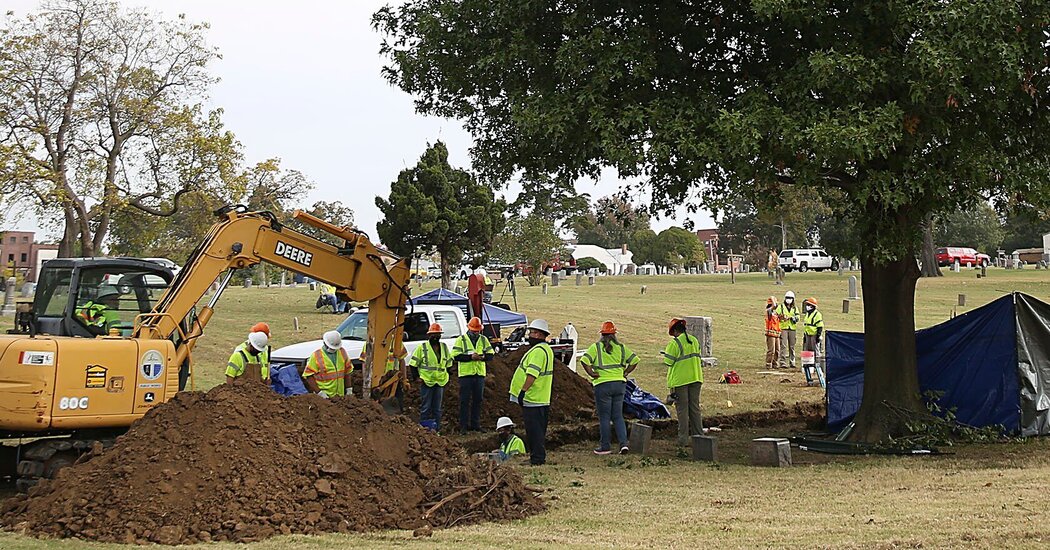 OKLAHOMA CITY — A forensic team in Tulsa, Okla., said on Wednesday that it had unearthed 11 coffins while searching for victims from the 1921 massacre in which hundreds of Black residents were killed.

The mass grave was discovered in an area of the city’s Oaklawn Cemetery where records and research suggested that as many as 18 victims would be found. Painstaking work will be required to identify whether the remains are from victims of the massacre.

The remains will not be moved until they can be exhumed properly to avoid deterioration, said Kary Stackelbeck, a state archaeologist. She said the discovery “constitutes a mass grave.”

“We have a high degree of confidence that this is one of the locations we were looking for,” she said. “But we have to remain cautious because we have not done anything to expose the human remains beyond those that have been encountered.”

The site of the dig, which began on Monday, was determined based on cemetery records dating from 1921 and from state truth commission findings in the late 1990s and early 2000s. A nearby dig in the cemetery in July did not uncover any graves.

For Brenda Alford, who heads the citizens’ oversight committee for the effort, and whose grandparents survived the massacre, the recent finding is encouraging.

“I’m very appreciative of all the hard work that is going into finding our truth, to again bring some sense of justice and healing to our community,” she said.

Ms. Stackelbeck said machinery removed the upper layers of an area in the cemetery that had originally been surveyed with ground-penetrating radar. The excavation revealed 10 coffins buried in the same pit and an 11th nearby.

The 1921 massacre began after white people tried to lynch a young Black man over allegations that he had attacked a young white woman who was an elevator operator at a drugstore. The man was cleared, but when a group of white men converged with a group of Black men at a police station, shots were fired and a fight broke out.

Within hours, white rioters attacked the Greenwood District, an affluent area of Tulsa once called “Black Wall Street.” From May 31 to June 1, 1921, the mob, law enforcement and the National Guard attacked Black residents and burned their homes and businesses.

When the carnage was over, the unofficial count of the victims ranged as high as 300. Officials forbade funerals and buried the victims hastily without death certificates or other records.

Although many residents vowed to rebuild, the district was never as prosperous as it had been. In later years, much of it was buried beneath an overpass. Still, a lingering question remained: What happened to all the victims?

Mayor G.T. Bynum has said that the excavation was a matter of conscience and reconciliation for the city and that it should do everything it can to find the victims.

“Today is a significant moment in the history of our city in trying to do right by the victims of this event,” Mr. Bynum said at a news conference on Wednesday.