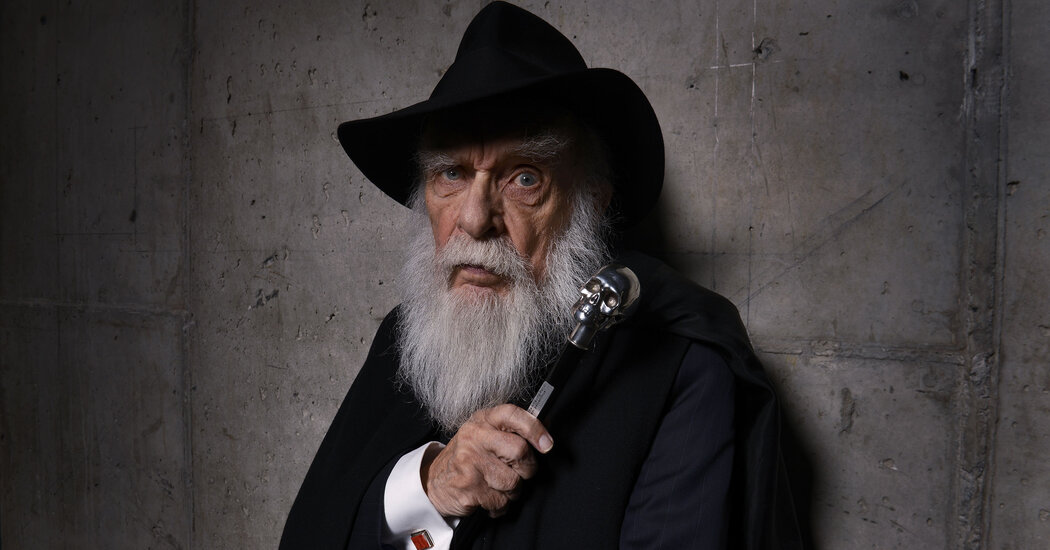 James Randi, a MacArthur award-winning magician who turned his formidable savvy to investigating claims of spoon bending, mind reading, fortunetelling, ghost whispering, water dowsing, faith healing, U.F.O. spotting and sundry varieties of bamboozlement, bunco, chicanery, flimflam, flummery, humbuggery, mountebankery, pettifoggery and out-and-out quacksalvery, as he quite often saw fit to call them, died on Tuesday at his home in Plantation, Fla. He was 92.

Mr. Randi’s death was announced by the James Randi Educational Foundation, which said he had died of “age-related causes.”

At once elfin and Mephistophelian, with a bushy white beard and piercing eyes, Mr. Randi — known professionally as the Amazing Randi — was a father of the modern skeptical movement. Much as the biologist and author Thomas Henry Huxley had done in the late 19th century (though with markedly more pizazz), he made it his mission to bring the world of scientific rationalism to laypeople.

What roiled his blood, and was the driving impetus of his existence, Mr. Randi often said, was pseudoscience, in all its immoral irrationality.

“People who are stealing money from the public, cheating them and misinforming them — that’s the kind of thing that I’ve been fighting all my life,” he said in the 2014 documentary “An Honest Liar,” directed by Tyler Measom and Justin Weinstein. “Magicians are the most honest people in the world: They tell you they’re going to fool you, and then they do it.”

Mr. Randi began his career in the late 1940s as an illusionist and escape artist. On one occasion he extricated himself from a straitjacket while dangling upside down over Niagara Falls; on another, after 55 minutes, from within a vast block of ice (“a cinch,” he later said); and on a third from still another straitjacket, this one suspended over Broadway, where he hung, as The New York Herald Tribune reported, like “a great dead tuna.”

But in later years, Mr. Randi was not so much an illusionist as a disillusionist. Using a singular combination of reason, showmanship, constitutional cantankerousness and a profound knowledge of the weapons in the modern magician’s arsenal, he traveled the country exposing seers who did not see, healers who did not heal and many others.

Their methods, he often said, were available to any halfway adept student of conjuring — and ought to have been transparent to earlier investigators, who were sometimes taken in.

“These things used to be on the back of cornflakes boxes,” Mr. Randi, his voice italic with derision, once told the television interviewer Larry King. “But apparently some scientists either don’t eat cornflakes, or they don’t read the back of the box.”

The recipient of a MacArthur “genius” grant in 1986, Mr. Randi lectured worldwide and appeared often on television; he was a particular favorite of Johnny Carson and, more recently, Penn and Teller.

He wrote many books, among them “Flim Flam! The Truth About Unicorns, Parapsychology, and Other Delusions” (1980); “The Faith Healers” (1987); and “An Encyclopedia of Claims, Frauds, and Hoaxes of the Occult and Supernatural” (1995).

In 1976, with the astronomer Carl Sagan, the writer Isaac Asimov and others, Mr. Randi founded what is now the Committee for Skeptical Inquiry. Based in Amherst, N.Y., the organization promotes the scientific investigation of claims of the paranormal and publishes the magazine Skeptical Inquirer.

Though he was often called a debunker, Mr. Randi preferred the terms “skeptic” or “investigator.”

“I never want to be referred to as a debunker,” he told The Orlando Sentinel in 1991, “because that implies someone who says, ‘This isn’t so, and I’m going to prove it.’ I don’t go in with that attitude. I’m an investigator. I only expect to show that something is not likely.”

In the course of his career, he investigated more than 100 people, including, memorably, Peter Popoff, a well-heeled self-described faith healer whom he exposed on “The Tonight Show.” Mr. Randi was also known for his decades-long sparring match with Uri Geller, the professed mentalist known for his serial abuse of flatware.

Through the James Randi Educational Foundation, Mr. Randi sponsored the Million Dollar Challenge, a contest offering $1 million to the person who, following rigorous scientific protocols, could demonstrate evidence of a paranormal, supernatural or occult phenomenon. Though the challenge attracted more than a thousand aspirants, the prize remained unclaimed on Mr. Randi’s retirement from the foundation in 2015.

Mr. Randi was all but born skeptical. He entered an irrational world, in Toronto, as Randall James Zwinge on Aug. 7, 1928, one of three children of Marie (Paradis) and George Zwinge.

Attending Sunday school as a boy, he was moved often to inquiry.

“They started to read to me from the Bible,” Mr. Randi recalled in 2016. “And I interrupted and said: ‘Excuse me, how do you know that’s true? It sounds strange.’”

In his regular classes, he proved such a gifted student that the local school system soon threw up its hands and let him attend only to take exams. He had the run of the city, and by the time he was 12, after seeing a performance there by the great American stage magician Harry Blackstone Sr., had found his calling.

At 15, young Randall got his first taste of debunking and its discontents. Hearing of a local preacher who professed to read minds, he attended a service. He saw immediately that the preacher was using a time-honored mentalists’ trick, called the “one ahead,” in which a performer appears to divine the contents of sealed envelopes he has previously opened and read.

When he stood up and exposed the fraud, congregants called the police; he spent several hours in jail before his father came to collect him. It would be the last time a jail cell could hold him, and the first time he became attuned to people’s astonishing willingness to be deceived.

At 17, bored, he dropped out of school altogether. He joined a traveling carnival as a mentalist but soon became an escape artist. After he sprang himself from a Quebec jail cell, a local newspaper christened him “L’Étonnant Randi” — the Amazing Randi. The name stuck.

For a time in the early 1970s, Mr. Randi toured with the rock star Alice Cooper, decapitating him nightly with a trick guillotine.

Mr. Randi continued his escape acts until his was in well into his 50s. But one day, as he rehearsed a television show for which he had been sealed and shackled in an outsize milk can, something went awry.

The lid of the can jammed, trapping Mr. Randi inside. There was little air. Shifting within his scant confines, he heard two of his vertebrae snap.

“I was in deep trouble,” he recalled in the documentary. “I knew that if I panicked, I would be dead — that’s all there is to it.”

At long last, he heard the locks on the can being undone and the lid pried open. He decided it was time to forsake escapism.

“There comes a point,” Mr. Randi said, “where you just don’t want to see a little old guy getting out of a can.”

At 60 he retired from stage magic entirely. By then he had built a parallel career investigating claims of the paranormal, much as Houdini had done.

One of Mr. Randi’s most celebrated investigations was that of Mr. Popoff. A California preacher who professed to heal the sick, Mr. Popoff had a wide following on television and radio. He drew large crowds at revival meetings around the country, at which he called upon audience members by name and correctly identified their afflictions. In 1986, The Los Angeles Times reported, his average gross income was $550,000 a month.

That year, Mr. Randi planted an accomplice with a radio scanner and a tape recorder at one of Mr. Popoff’s public meetings. The scanner picked up Mr. Popoff’s wife relaying information previously gleaned about audience members into a small receiver hidden in his ear.

“Popoff says God tells him these things,” Mr. Randi told U.S. News & World Report in 2002. “Maybe he does. But I didn’t realize God used a frequency of 39.17 megahertz and had a voice exactly like Elizabeth Popoff’s.”

Footage of Mr. Popoff’s service, with the audio of Ms. Popoff’s voice superimposed, was broadcast on “The Tonight Show.” Mr. Popoff ceased operations in 1987, though he later resumed them.

Though his pursuit of Mr. Popoff was a consuming passion, Mr. Randi’s white whale was indisputably Mr. Geller, who had been famed since the 1970s for feats like bending keys and spoons, which he said he accomplished by telepathy.

Not so, said Mr. Randi, who explained that these were ordinary amusements, done by covertly bending the objects in advance.

In 1973, Mr. Geller made a disastrous appearance on “The Tonight Show” in which he was unable to summon his accustomed powers: On Mr. Randi’s advice, the show’s producers had supplied their own props and made sure Mr. Geller had no access to them beforehand.

Mr. Geller’s popularity continued undimmed, however, prompting Mr. Randi to write an exposé, “The Magic of Uri Geller” (1975), republished in 1982 as “The Truth About Uri Geller.”

Over the years, Mr. Randi managed to antagonize many, and not merely the targets of his investigations. He cast a wide condemnatory net, speaking out against alternative medicine, chiropractic and religion itself, which he called “the biggest scam of them all.”

His investigative methods were sometimes called deceptive. In one highly publicized stunt intended to show the gullibility of the news media, he had a young associate — his life partner, then known as José Alvarez — pose as a spirit medium named Carlos.

On a tour of Australia in 1988, “Carlos” drew hordes of worshipful followers, and the uncritical attention of many journalists, as he pretended to channel long-dead spirits. When Mr. Randi revealed the ruse, it drew those journalists’ ire.

Mr. Alvarez made headlines again in 2011 when he was arrested by federal authorities at the couple’s home in Plantation, Fla., and charged with passport fraud and identity theft. Mr. Alvarez, an artist whose original name was Deyvi Orangel Peña Arteaga, said that he had fled his native Venezuela as a young man to escape antigay death threats.

He had reached the United States on a student visa. After it expired, Mr. Peña assumed the identity of a Puerto Rican man whom he erroneously believed to be dead.

For observers of Mr. Randi’s career, the inevitable question was whether the great deflator of deception had himself been deceived.

Over the years, Mr. Randi was the subject of a string of defamation suits, including several by Mr. Geller. Though a Japanese court once ordered him to pay Mr. Geller about $2,000, Mr. Randi said he never paid a cent to anyone who sued him.

In scientific circles, he remained a revered figure to the end. Among his many honors, he had a minor planet named for him, Asteroid 3163 Randi, discovered in 1981.

Mr. Randi resided for many years in Rumson, N.J., in a house equipped with secret staircases, a talking door knocker and clocks that ran backward. He had lived in Florida since the 1980s.

His survivors include Mr. Peña, whom he married in 2013, as well as a sister, Angela Easton, and a brother, Paul Zwinge, Mr. Peña said.

Though he remained a dyed-in-the wool rationalist to the last, Mr. Randi did have a contingency plan for the hereafter, as he told New Times in 2009. “I want to be cremated,” he said. “And I want my ashes blown in Uri Geller’s eyes.”