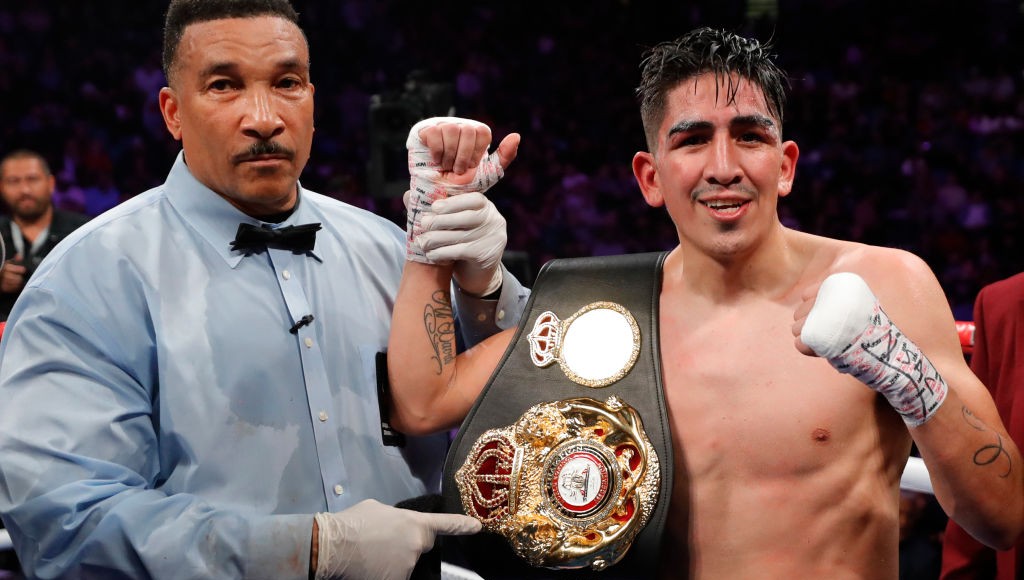 On Halloween night, Leo Santa Cruz (37-1-1, 19 KOs) and Gervonta Davis (23-0-0, 22 KOs) will meet in the Alamodome in San Antonio, Texas on Showtime PPV (9 p.m. ET) in a winner-take-all bout between the WBA Super World Super Feather champ and the WBA World Light champ. The fight will take place at Santa Cruz’s typical 130-pound weight, and he has a reach advantage on the shorter Davis, but he’s still going up against a compact and powerful lightweight who, even if five pounds lighter than he usually is, poses a major threat.

For the 32-year-old veteran Santa Cruz, fighting an up-and-coming superstar in Tank Davis is an opportunity to assert himself as one of the best fighters in the world. The Mexican star fights out of California now and has spent the better part of 2020 getting ready for this fight — first in anticipation of a May date and now preparing for this Halloween showdown. Uproxx caught up with Santa Cruz last week to talk about that off-and-on training, how he plans to neutralize Davis’ power and take him to the late rounds, and what a win in this fight would mean for his legacy as a fighter.

How has camp been and how are you feeling a couple weeks out from the fight?

Well, camp has been great. I’ve been sparring a lot with different sparring partners. My dad’s been in the gym telling me what to do, practicing some shots that we want to try in the fight, and I feel great. I feel strong, I feel ready, I’m in great conditioning, and I’m just ready to and excited to go out there and give a great fight for the fans.

11 months will be the longest layoff between fights in your career. What was that time off like and how did you deal with that and handle training prior to a full camp while waiting for this fight date to be finalized?

Yeah, you know, it’s been hard. This is my longest layoff, 11 months, but I’ve been in the gym. I was in the gym training, then I stopped for a little bit, and got back to training because we were trying to get ready for this fight in May. So we were training before, and then they told us we weren’t going to fight so I stopped training a little bit before going back. So I was on and off, but I’ve been training almost the whole year, on and off, so I’ve been ready. We’ve been practicing in the gym because we knew the fight was going to get done. We were just waiting to see when with all the virus and everything. But we were ready, and we were prepared.

I know you said in the presser you’ve been sparring with bigger guys to get ready for this fight. What are you learning in those sessions about how you want to approach Tank?

I can’t get too confident in there. I gotta be really smart and not try to brawl with him because I know he’s a big puncher and the punches are harder cause they’re bigger guys. So I gotta be smart and not stay in there, moving a lot and trying not to get hit.

You’re an active guy, but how do you balance being aggressive and wanting to be active while, like you say, not allowing him inside and making it a brawl where he’s going to want it to be?

Yeah, it’s hard cause I’m used to going forward and brawling with fighters and entertaining the fans, cause that’s what the fans love – for fighters to brawl and stay in the middle of the ring and go back and forth. But I’ve gotta be smart in this fight. I’ve got to go out there and use my distance and keep him outside with the jabs and the rights and stuff, but we’re going to go in there and see how he feels. If he’s too strong, we’re going to box him from the outside, and if we feel his punches are not hurting us then we’re going to make it a brawl and entertain the fans. I’m going out there to give the fans a great fight, and that’s what I want.

You’ve fought guys with various styles throughout your career. What can you draw from those experiences to adapt, like you say, in the ring during a fight to what they’re doing?

For every fighter I faced, they have different styles, and I could adapt to each because in the gym when I’m training, my dad will have me brawl and to move. He knows I can box really good and everything, but I always try to go out there and give an action fight. Stay in there with the fighters, but once we’re in the ring we adjust to anything and we’re going to adjust to Tank Davis and we’re gonna give a great fight and be smart and get to the win.

I think in the early rounds I have to be cautious, smart, let him get tired and gas out. Throw all his big punches, make him miss and miss, and you just try to win by making him miss and land my shots by boxing and counter-punching him really good. Then, as he’s getting tired in later rounds, start putting pressure and breaking him down and hopefully start to get him tired and for him to quit.

How do you balance when preparing to fight someone bigger that you’re feeling as strong as possible but also doing the work to make sure that your agility and speed is an advantage to you compared to someone who wants to be more inside and a little tighter?

We just have to work on conditioning, and that’s what we’ve been doing. We have a great conditioning program, and we’ve been bringing in sparring partners who are bigger, and I just use my speed to do my combinations and then get out of there right away to not get hit. And when I see the big shots just take steps back and then move in with counter-punches. I think that’s the key to beating him.

It’s a unique opportunity to fight for belts in two weight classes at once and to do it against one of the sport’s rising stars. What would a win in this fight mean for you and your legacy as a fighter?

I think it would mean the world to me. This is the biggest fight of my career, of my life, and I just want to go out there and give a great fight and get this win. I know if I get this win beating one of the best out there, a superstar, it’s going to put me, I think, in the top 10 pound-for-pound stats, and that’s what I want. I want to continue to make history and win a title in a fifth division and, you know, to continue to make more history, and when I retire I want to be remembered as one of the best out there. And what better opponent than Gervonta Davis to do that.

You’ve said not a lot of guys don’t want to fight a guy like Tank. Is this something where you want this to be the start of trying to unify belts and you always hunting for big opponents and the best possible fight?