Nadiya Hussain has never published a baking book. She has never fronted her own baking show before either, having had her life changed by appearing on the big one, the one which put her under the national spotlight as she transformed from a shy, uncertain home cook into a Great British Bake Off winner, the best-loved winner in the history of the series. Now, after five years of fame, her career, which has encompassed books, documentaries, cooking shows, a memoir, an MBE, and much, much more, has come full circle, and she is ready to focus on baking again. Surely someone has tried to get a baking book out of her before this?

“It was my choice. I chose not to go straight into baking,” she says. She is in her conservatory at home in Milton Keynes, the week before her three children are due to go back to school. It doubles up as both her home office and the cats’ room; her son is drawing at the kitchen table. Ordinarily, she’d be out in the world, meeting people, and she misses it terribly. “I really miss people. I miss hugging people. Even a handshake would be nice right now. I always overrun on everything, because I’m talking about something else. Shoes, a flavour, it could be anything.” I’m not even wearing shoes, I tell her. “I mean, I put on a bra just for you today,” she grins. She got up late, for her, because she’s been staying up into the early hours, watching Schitt’s Creek in bed. Not that you’d know it. She is as lively and warm as you’d expect from her on-screen persona, happy to dole out advice to this terrible home baker, but she has a pleasing, simmering defiance to her too, that has evolved since her 2015 TV debut.

Her new book and series, Nadiya Bakes, had been planned for a while, but have turned out to be more timely than expected, not just for Hussain, but for the large numbers of people who turned to their scales and ovens during lockdown. “It’s the thing that gives me comfort when I’m suffering with anxiety, especially over lockdown,” she says. Hussain has been open about her mental health, and made a moving documentary called Anxiety and Me for the BBC about it in 2019. Lockdown made it difficult for her to focus. “Baking is the thing that allows you to focus, because you’ve got someone telling you exactly what you need to do and when you’re doing it. And at the end of it you get cake.”

We had the Clap for Carers but how has that been reflected in how they’re paid, how they’re looked after? It hasn’t

Many members of Hussain’s family have been working all year. Her sister works at a school, with children who don’t speak English as their first language. Another sister works as a doctor’s receptionist, another at a pharmacy. Her mother, in her 50s, works in a factory cleaning hospital linen. “I’ve been really worried for my mum, because I almost expect her to come away getting sick. And she’s been really well, I have to say.” Her mother keeps asking her not to tell people that she works in a factory, that it must be embarrassing for her. “And I’m like, Mum, no. Without her, and her colleagues and her factory, hospitals would not have clean linen. She tells us not to talk about it, but we find any excuse to talk about it, because she’s a key part of keeping this country running and we’re really proud of her.”

With so many key workers in her family, does she sense any greater appreciation of just who has been keeping the country running during this time? “I hope so,” she says, a little warily. “I just hope that when this is all over, and even now, people step back and think about how important they are. It’s all those jobs that people think that immigrants come and do. My mum is an immigrant, and she does that job, and she’s doing a job that lots of people who were born in this country would not be willing to do. But she does it because she has a family to look after. She doesn’t do it because she’s a hero.”

After Clap for Carers, after that show of support, how optimistic does she feel about remembering? “I think people will forget very quickly,” she says, matter-of-factly. “Because we had the Clap for Carers, and every Thursday we were out there, but how has that been reflected in how they’re paid, how they’re looked after? It hasn’t. That’s what makes me really, really sad. Because these people don’t look at themselves as heroes, they see themselves as people who have families to look after, or who are new to this country, or who have come here for a better life. They are the ones who have kept this country going. I hope, as a country, we recognise that and it reflects in the way we pay them and in the way we honour them. But I don’t know. I don’t know how much faith I have in it.” 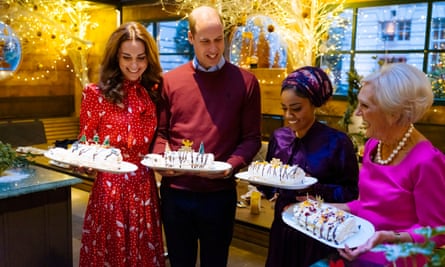 Nadiya Hussain with the Duke and Duchess of Cambridge and Mary Berry on the BBC’s A Berry Royal Christmas in 2019 Photograph: BBC/Shine TV/Kensington Palace/PA

Hussain has three children; two boys and a girl. The boys have asthma, and sending them back into the world was a difficult decision. “We’re having to use our own instincts as well as listening to the government,” she says. “For us as a family, as long as we know we’re doing the right thing, we’re following the rules and we feel safe, we hope that lots of people are doing the same thing as well. But I don’t know how much faith I’ve got left in our government. I fully understand the worry about the economy, but there has been this constant talk about the economy that has devalued human life, slightly. We know people who have lost people, family friends, people that my husband knew, people I grew up with, have died of Covid. My nephew has been born during the pandemic, he has not been able to have a cuddle with any of his grandparents.” Her eldest son is 14. “He always says: ‘Mum, when this is over and you guys are old, this is our country, we’re going to have to run it, but what have you left behind for us?’ If a 14-year-old is saying that, we’ve got to listen to them. I think we’re listening to the wrong people. There’s more sense in the next generation than there is in ours.”

When I see in a meeting that I’m the only person of colour, of faith, of my gender, in that room, there is a problem

Back in the early autumn of 2015, when Nadiya Hussain had just been crowned the winner of The Great British Bake Off, her public persona, newly forming then, was a little different. She was less sure of herself, more wary of giving her opinion. Is it fair to say that something has shifted? She nods. “What I’ve learned in the past five years is that the change I want to see, I have to see in myself first. I am a brown Muslim woman, working in a very male-dominated, Caucasian industry. And if you’d asked me five years ago, what does it feel like to be a Muslim, I wouldn’t have entertained it. I would have said, look, can we just talk about the cooking and the baking? Which, can I say, I still love talking about. It’s still my job.” But her job has brought her to another place. “Having worked in it for five years, there’s no space [in the industry] for someone like me. I’ve learned that if I don’t create that space, who will? Someone has to do it.”

Over the past six months, she says, the Black Lives Matter movement has shown just how uncomfortable certain topics of conversation can make people. “Five years ago, I wouldn’t have had these conversations, because they would have made me uncomfortable, because part of me wants to be a part of the white middle-aged Caucasian industry. I want to just blend in. But the truth is, I’m never going to blend in. They will always tower over me, they will always be whiter than me, and they will be more English than I am, and they’re men. I will never, ever blend in. So I’ve come to the conclusion that, rather than trying to blend in, I’m going to create space.” She often talks about never seeing someone who looked like her on television when she was growing up. “The only person I ever watched was Ainsley Harriott. He’s a man who’s six foot something, but just because of his brown skin, I felt like he was representing a part of me. And I think, five years later, it’s as much about the job that I do and the job that I love to do as it is about representation.” 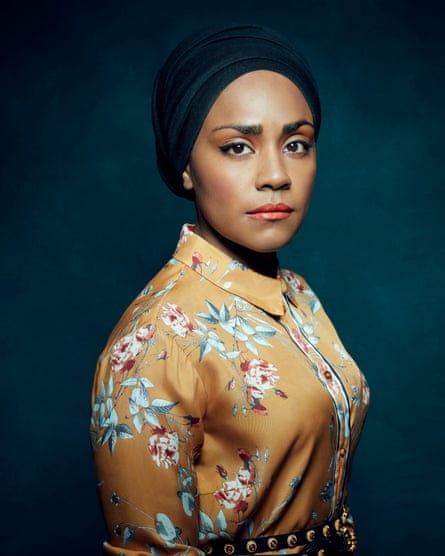 She is used to being told that there isn’t a problem in cookery, in publishing. “I refuse to be told that now, because there is. When I see in a meeting that I’m the only person of colour, of faith, of my gender, in that room, there is a problem. There is a problem when I’m filming a show and I’m the only ethnic minority in a group of 30 people. I think highlighting that problem makes people very uncomfortable. We’ve got to get to a point in our industries where we’re not uncomfortable talking about these things. I hope that because I talk about it, it encourages other people to acknowledge that there is a problem.”

Behind the scenes, she doesn’t always meet people who have an open mind. “I’ve had conversations with people who have said: ‘Oh you know, I have black friends, I’m not racist.’ That doesn’t mean that you shouldn’t be having this conversation! That doesn’t mean there isn’t a problem.” She sighs. “I suppose for me it will always be more than just a job. And it’s really tiring.” Is there a part of her that would like to simply talk about her cookbooks and her television shows, and not any of the things we have been talking about? “Absolutely! I’d love to, because that would be the easy way. But I also understand the responsibility of needing to talk about these things. It comes with great responsibility, but it’s also quite exhausting, at the same time, because I can’t do a Lancashire hotpot without somebody saying, why do you get to do a Lancashire hotpot? Why do you get to make a Cornish pasty?”

She smiles, her big, famous, winning, national treasure smile. “But I also really enjoy saying, does it look like I care?”

Nadiya Bakes is published by Penguin, £22. To order a copy, go to guardianbookshop.com. Delivery charges may apply