It’s 50 years since a Gaelic football team played in east Belfast, and some 400 years since the last known hurling match – St Colmcille’s football team closed as the Troubles descended on Northern Ireland, and there’s been no record of hurling since the Gaelic lord Conn O’Neill’s rule in the 16th century. Gaelic games, associated with the nationalist community, might seem like unlikely sports to back in the historically loyalist area.

Yet last week the East Belfast GAA (Gaelic Athletic Association) club finished its first season triumphant. The club was formed in May after a series of conversations between friends Dave McGreevy and Richard Maguire, trying to do something about their lockdown boredom. McGreevy, a keen player of “Gaelic”, as Gaelic football is known, had moved to east Belfast with his fiancee. “Richard and I grew up with Gaelic games; we’re at an age where we’re both thinking about kids, so you would want a local team.”

Our coach says, ‘I don’t care where you go on a Sunday – all I care is that you’re up for playing camogie’

Intent on promoting inclusivity, McGreevy set up a Twitter account, made its avatar the two towering cranes of the city’s Harland & Wolff shipyard, and tweeted for players – “all ages, genders and backgrounds welcome”.

“My phone exploded! By lunchtime we had hundreds,” says the 34-year-old. Now with over 1,000 members, it’s one the region’s biggest clubs. A large proportion have never played before, and come from a mix of backgrounds and identities.

Competitive games began just two weeks after the initial practice, but the first season – cut short by coronavirus – has brought significant milestones. The camogie (women’s hurling), hurling and women’s football teams picked up their first wins as the season closed. “Other teams are impressed by how quickly we’re improving,” says Beth Adams, 26, a player from Ballygowan. “We’ve received pre-match welcome gifts – cakes, buns. The support from other clubs and the local community is outstanding.”

In August a hoax bomb alert was sent to Henry Jones Playing Fields, where the club was practising. Both DUP and SDLP politicians condemned the act.

Establishing a club in an area where the GAA has been alien, or seen as hostile to unionists, had to be done with sensitivity. The team wears neutral black with yellow stripes, and its trilingual crest features the shipyard cranes, the hand of Ulster, a shamrock and thistle, and the motto “Together” in English, Irish and Ulster Scots. “I’ve never had so much craic,” says McGreevy, “and everyone, no matter what background, deserves this opportunity. Being inclusive is non-negotiable.”

“Camaraderie is strong – that may disappear when we get serious next season!” says Mark Brooks, 31, a Gaelic midfielder and local from a Protestant background. “It was something I never had the opportunity to do as a kid. East Belfast GAA is the perfect storm: everyone is fresh. It feels significant that kids in east Belfast have choices.” 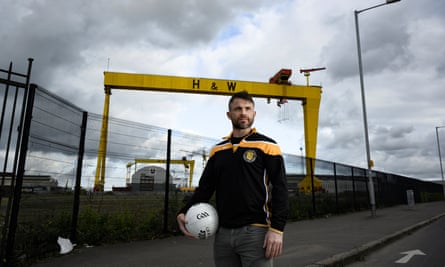 “Our coach says, ‘I don’t care who you go out with on a Friday, or where you go on a Sunday – all I care is that you’re up for playing camogie,” says Kimberly Robertson, the team’s secretary – from Boston, Massachusetts, now living in east Belfast. “Being an immigrant, not having a GAA background, and being 40, I was worried about being accepted. I’ve never felt like an outlier – only when I’m dying at the end of training, and the rest are barely sweating! I was in a sorority in college, and it has that same sense of sisterhood.”

“It fills me with hope for the future,” says Linda Ervine, a leading Irish language activist and the club’s president. Ervine, who is from a unionist background, is a figurehead in cross-community dialogue. “I’ve had to interrogate my own internal biases of the GAA. Change doesn’t happen without challenge,” she says. “Seeing a match, tweets, knowing someone on the team – it will impact generations to come.”

In September, some team members tested positive for Covid-19 and the club was shut down for a week. Throughout lockdown, the players say, the club provided emotional solace. “My mental health soars when we play,” says Robertson.

The club plans to organise junior teams, secure a local ground and establish a club chaplain. They recently signed up to a multi-sport inclusion charter, making community outreach pledges from inviting local unionist politicians to games to bettering access for disabled people.

“The sustained interest has challenged my own perceptions,” says McGreevy, who hopes to recruit even more local novices. “It’s a progressive place where I’ve set up my life, with the sport I love. Let’s just get stuck in with more wins.”