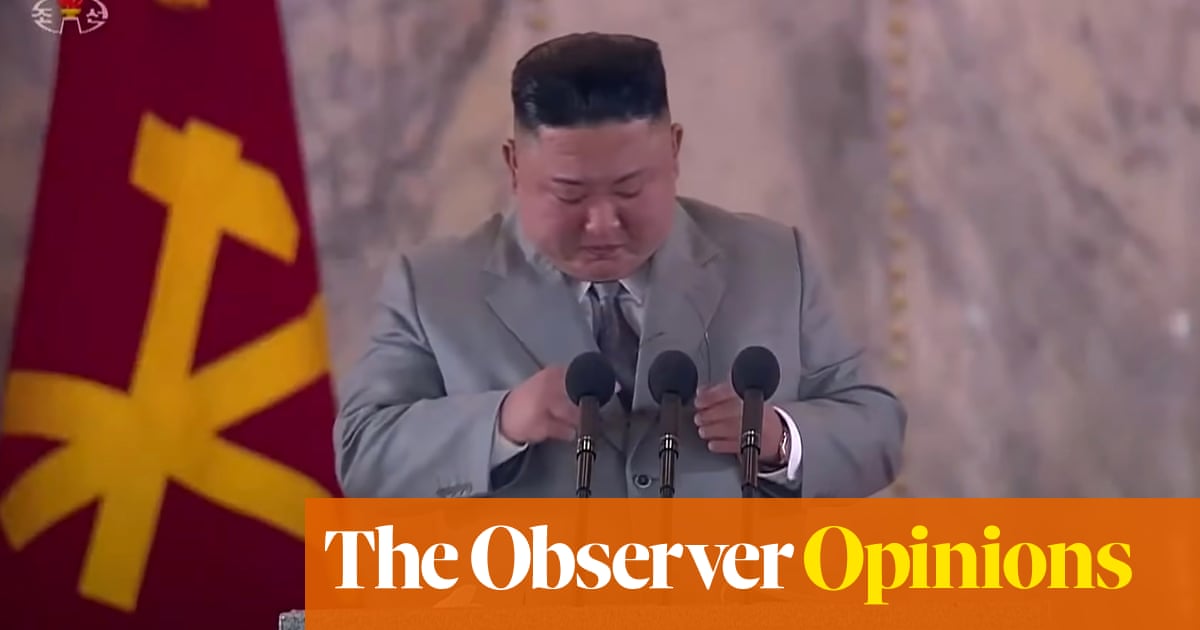 The sight of a tearful Kim Jong-un sobbing, not waving, at last weekend’s grand military parade in Pyongyang has upset the west’s familiar North Korea narrative. Was Kim putting on a show of contrition for failing his cruelly oppressed people, or was he genuinely distressed? Did it mean, despite the unveiling of yet another bigger, nuclear-capable, long-range missile, that the regime was losing its grip? Or is it simply Kim who’s lost it?

Given mounting pressure from UN and US sanctions and drastic falls in trade and aid caused by the pandemic, it would hardly be surprising if Kim were feeling the strain. Yet despite all the international hostility surrounding him, Kim’s sudden downfall or the chaotic collapse of his regime would be viewed as extremely dangerous and destabilising – at least in the short term.

The Korean conundrum reflects the perils – strategic, political and moral – implicit in the merciless, usually US-orchestrated pummelling and ostracism of so-called “rogue states” in the age of Covid. As Colin Powell, a former US secretary of state, liked to say, politicians should be careful what they wish for – lest it come true. Leaders and governments bent, for whatever reason, on tormenting others into submission risk creating a bottomless torment for themselves.

The awful suffering of Iran’s people is another case in point. The way the Trump administration tells it, Iranians are victims of their terrorist regime. But they are victims, too, of Washington’s blocking of a $5bn IMF loan to help Iran fight coronavirus. They are victims of additional American sanctions this month against 18 Iranian banks that mostly deal in domestic credit. US measures also indirectly imperil imports of food and vital medical supplies.

Children and old people, farmers and bazaaris do not have any say over Iran’s nuclear policy. But they are among those most hurt by sanctions – and the virus. One estimate suggests Covid-19 deaths in the Middle East’s hardest-hit country could total 300,000 by the end of 2021. “The broad application of sanctions amounts to collective punishment for tens of millions of Iranians,” the New York Times commented. “Under Trump, being Iranian is crime enough.”

Notorious, too, in this context is the west’s isolation of Venezuela, whose 1999 Bolivarian revolution, now controversially led by Nicolás Maduro, was regarded from the first as an insufferable challenge to US influence in Latin America. This impoverished country is now in its sixth year of economic crisis caused by mismanagement, corruption, hyper-inflation, rights abuses, and the flight of nearly five million people.

For Trump and his emulators, bashing weaker countries is fun. It makes them feel powerful. But it doesn’t work

More than 10 years of US sanctions on the government, central bank, state oil company and individuals have made matters worse while failing in their main aim – to install a leader acceptable to Washington. Addressing the UN last month, an unrepentant Maduro condemned US “imperialist ideas”. Donald Trump’s attacks on the World Health Organization, hindering the global fight against Covid-19, made him the biggest rogue of all, he suggested.

The use of sanctions to enforce compliance with policy aims and ideological beliefs has grown rapidly in recent years. Such measures are characterised by their broad ineffectiveness. Trump’s trade sanctions on China, Russia and the EU, for example, failed to change minds or benefit the US.

A 2019 survey of experts by Foreign Affairs magazine found most agreed sanctions “do more harm than good”. Yet UN calls for sanctions on the weakest states to be suspended during the pandemic have been largely ignored.

The recent experiences of North Korea, Iran and Venezuela further suggest attempts to forcibly change or reverse internal policies through external pressure actively encourage worse behaviour. Kim may feel tearful. But as he has been squeezed, so has he squeezed North Korea’s imprisoned populace.

The uncomfortable reality is that Pyongyang’s latest ICBM, if equipped with multiple independent nuclear warheads, could probably overwhelm missile defences and reach any American city. Trump blew the chance to talk. Sad Kim has upped the ante.

Its sheer heartlessness aside, Washington’s “maximum pressure” campaign against Iran has not stopped the regime meddling in Syria and Iraq, building ballistic missiles, or supporting anti-Israel groups. Trump’s reneging on the west’s 2015 nuclear containment deal with Tehran has meanwhile pushed the country ever closer towards nuclear-weapons-making capability, with Saudi Arabia apparently following suit.

Unthinking American enmity has empowered hardliners within Iran’s theocracy who never trusted the “great Satan” and now claim vindication. A sense of living under siege, beset by sabotage attacks, has in turn encouraged egregious official abuses and repression, symbolised by the persecution of the courageous human rights lawyer Nasrin Sotoudeh, and blameless victims such as Nazanin Zaghari-Ratcliffe. The regime is at fault. But like so many, these jailed women live in the shadow of Trump’s menace.

US sanctions on Venezuela, like its ham-fisted political interventions, have been similarly counter-productive. Efforts to replace Maduro with the pro-western National Assembly president, Juan Guaido, have stalled. As Venezuelans grow poorer, the comrades in charge in Caracas have increasingly pursued any means to ensure their own survival – driven by the US, ironically, into three-way sanctions-busting deals with North Korea and Iran.

Imposing sanctions on a sovereign state whose behaviour is deemed a threat is better than waging war. But too often, and especially amid a pandemic, the undiscriminating, morally indefensible harm done to the health, wellbeing and livelihoods of ordinary citizens is almost as great, while those in charge escape unscathed. For Trump and his emulators, bossing and bashing weaker countries is fun. It makes them feel powerful. But it doesn’t work.

The alternative, preferable course is to painstakingly pursue mutually beneficial outcomes through dialogue based on trust and respect. This is called diplomacy. It’s sadly out of fashion.