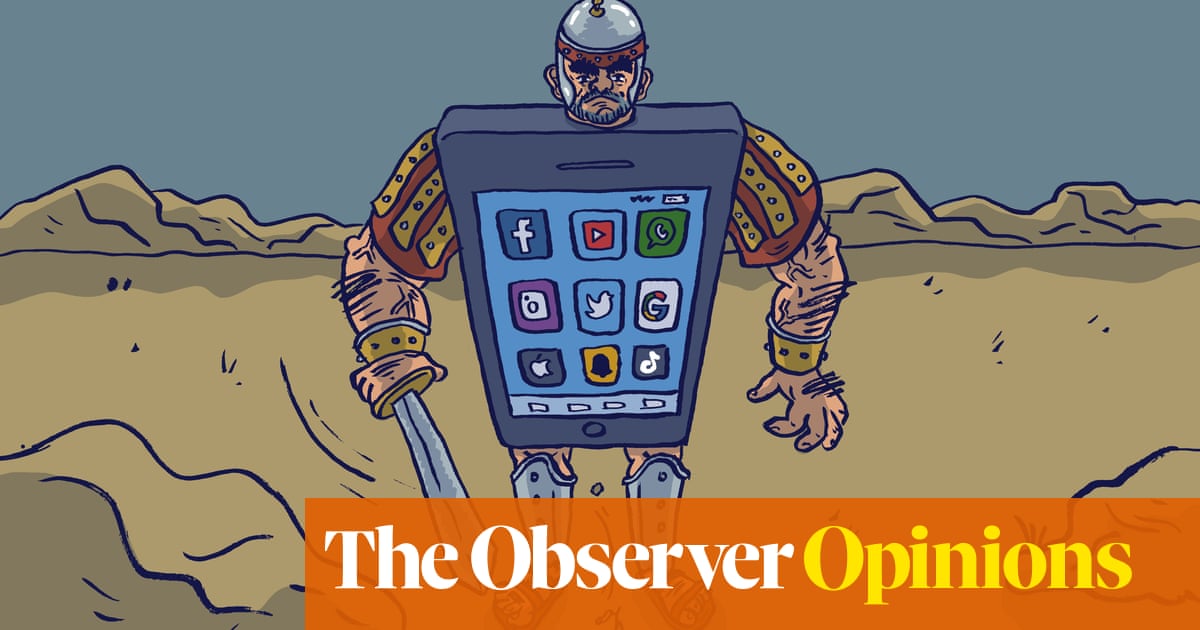 It’s time to address monopoly capitalism and, in particular, monopoly data capitalism, which has been turbo-charged by Covid-19, forcing the world to live and work online. A Joe Biden presidency – increasingly likely – and an EU unhampered by British reluctance to do anything bold to reform or even tax a monopolistic private sector are set to make common cause. They will act in sync to attack the now bewildering monopoly power of the hi-tech giants by tackling its foundation – the simultaneous owning of pivotal digital platforms and the unbridled provision of the services on them.

Together, they will go on to reclaim the operation of the internet and enlarge individual control of personal data. Moreover, Biden, if he fulfils his campaign pledges to challenge shareholder-value-driven US business, act on climate crisis and enlarge union rights, will Europeanise the US economy to make it more friendly to this reform agenda. It will be a sea change – with Britain a marginalised bystander.

In the past 10 days, both the powerful House judiciary committee and the EU commission, under pressure from the French and Dutch governments, have signalled a readiness to challenge Apple, Google, Facebook and Amazon to the point of breaking them up. The EU has been circling round the possibility of separating the “gatekeeper” platforms from their owners’ capacity to favour the selling of their own goods and services on them, which is a crucial step on the way to breaking them up. But it is a first for the commission to be challenged so publicly by a joint paper from two member governments to do just that – and to go even further and faster if necessary. The initiative was quickly backed by Germany.

The EU’s capacity to act unilaterally on US companies is of course limited and Donald Trump has been fierce in warning the EU against extending its ambitions to US companies. In June, he actually threatened a trade war over the EU’s readiness to sanction digital taxes on the Big Four from its member states. It is a threat that has so intimidated the enfeebled Brexit British that last week it was reported that the chancellor, Rishi Sunak, would excuse Amazon from a proposed British digital tax.

But a Biden administration would change the entire dynamic. It was the majority Democrats on the judiciary committee who made the running in this landmark congressional report and, even though the Republicans did not sign up for all the remedies, they shared the same analysis. This is one of the few areas in which there is a bipartisan consensus. Big tech, notwithstanding the great benefits it has brought to US society, has grown over-powerful, arrogant and monopolistic. It is predatory. It charges exorbitant fees. It extracts valuable data. It snuffs out rivals. “These firms,” wrote the committee members, “wield their dominance in ways that erode entrepreneurship, degrade Americans’ privacy online and undermine the vibrancy of the free and diverse press. The result is less innovation, fewer choices for consumers and a weakened democracy.”

Amen to that. It also mirrors the thinking in Brussels. If the EU were to move to, say, prohibit a planned takeover by a hi-tech giant of a potential tech challenger, outlaw favouring in-house products and services, do more to protect data privacy or insist the platforms get opened up, it will find a US only too ready to do the same.

The committee was especially incensed by the lordly attitude to giving evidence of Tim Cook, Mark Zuckerberg, Jeff Bezos and Sundar Pichai, respectively the CEOs of Apple, Facebook, Amazon and Google. As it tried to elicit from them answers on whether Apple abused its monopoly with its App store, about Facebook’s monopoly of online advertising, on whether Amazon used information garnered from third sellers on its platforms to help its in-house sales or on how Google exploits its global control of internet search, the committee got short shrift. The answers, it said, were “often evasive and non-responsive, raising fresh questions about whether they believe they are beyond the reach of democratic oversight”. But the CEOs had no choice but to be evasive: they could not answer honestly without acknowledging the truths behind the questioning.

The proposed remedies are sweeping, reflected in the Franco-Dutch paper to the EU commission. Anti-trust and competition law, the backbone of ensuring fair play in a market economy, is too flat-footed, too slow and fails to get ahead of the curve. Too many challengers have been eliminated by takeovers that should have been stopped, anticipating the impact on future competition rather than judging it in the here and now. Platforms should be prohibited from operating in adjacent lines of business. All products and services from whatever source should have equal access to the platforms, “self-preferencing” should be outlawed and there should be complete “interoperability” – computer systems able to work with each other.

The law should be framed to allow private companies to launch malpractice suits of their own. Newspaper groups should be able to come together and use the new legal framework jointly to insist on fairer, less predatory terms for the use of their journalistic and advertising content.

The Johnson government seems either blind to all of this or judges it of secondary importance besides its ambitions for “global Britain” free from the EU yoke, even if it is attacking predatory monopoly power or agreeing, as it did at last week’s EU summit, to create Gaia-x to store and manage EU-wide data in the cloud.

Our Competition and Markets Authority (CMA) has little of the ambition of the EU or the US competition authorities and when its former chair Andrew Tyrie tried to make it a consumer champion, observing that the digital platforms were too powerful and could “destroy a small business with a change to an algorithm”, he was ignored. In June, he resigned in protest and the CMA has regressed to its comfort zone – technocratic caution – with no ministerial challenge to behave differently. As the EU and US recast digital capitalism, the truth is brutal: Brexit Britain has made itself irrelevant, a country to be plundered.

• Will Hutton is an Observer columnist