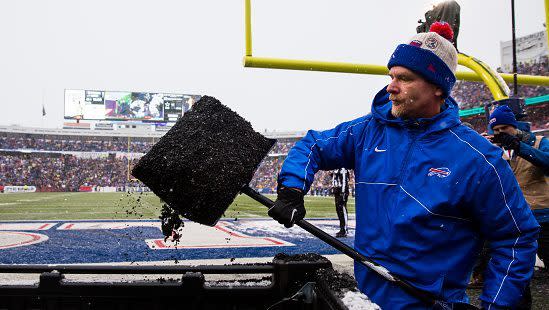 Despite grass being widely available and easy to grow, mankind remains determined to come up with ways to simulate it.

The Bills noticed that both Buffalo and L.A. Rams players had issues with footing during the last game played there, three weeks ago.

“What we came back with was there was some fill that was put in and adjusted on the turf,” McDermott said Saturday. “We’ll take another look at it today. We’re going to get out there and practice, but what I’ve been told is it should be good going forward.”

It’s good to see that the Bills were willing to admit that things maybe aren’t ideal with the field (some teams would double down and refuse to acknowledge an issue) and that there’s a way to make it better. Even if it helps the Chiefs’ receivers make their cuts and turn on the jets during Monday night’s game, it helps the Bills, too. More importantly, it’s the right things to do for the teams, the players, and the game.

Here’s hoping every team with fake grass issues become willing to admit it and to do what needs to be done to improve it. Even if any organization wrongly views its players as pieces of a machine and not as sons, brothers, nephews, husbands, etc., every organization should want to protect the investment it has made in its players by making the fake grass look and feel more like real grass or, even better, finding a way to use real grass.