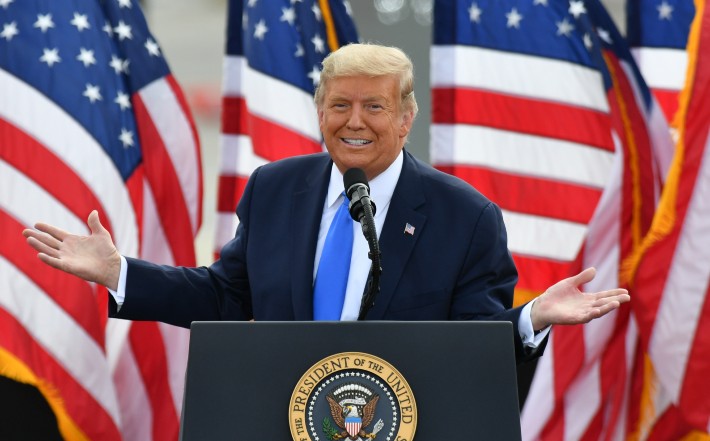 President and ratings loser Donald J. Trump’s rallies are dense fogs of bluster, self-pity, embellishments, and outright lies. There are also a lot of jokes. And yet Trump has often said he never jokes. So when he told a sea of supporters in Macon, Georgia that, should he lose to Joe Biden in the forthcoming presidential election, he may leave the country, it didn’t seem like he was exactly kidding.

“You know what? Running against the worst candidate in the history of American politics puts pressure on me,” Trump told his fans. “Could you imagine if I lose? My whole life — what am I going to do? I’m going to say, I lost to the worst candidate in the history of politics! I’m not going to feel so good. Maybe I’ll have to leave the country, I don’t know.”

If you go by polls, it sure does look like a Biden win is in the cards. Trump’s currently trailing his opponent, the former Vice President, by double digits in many states, and the race is tight in battleground states he handily won in 2016. That being said, it seemed like he was going to lose to Hillary Clinton around this time four years back, so don’t get too comfortable.

But let’s say the polls are right this time, and Trump is going out in a landslide unseen since Richard Nixon crushed Hubert Humphrey in 1968. When people learned that Trump was threatening to leave the U.S., some people were cool with that.

In 17 days Trump needs to lose in a landslide so big that he wants to leave the US and never come back.

Others had a better idea.

Even if he said it as an off-the-cuff joke, again, he doesn’t joke, especially given the legal and financial troubles that await him once he’s no longer the most powerful man in the world.

People don’t realize how likely this is. There’s an avalanche of legal exposure the President has been holding at bay with the perversion of presidential immunity. It will all disappear in a flash if he loses the presidency. https://t.co/3Abs8SAnAT

This guy is so going to flee the country if he loses. I suspect he’s thinking through scenarios (e.g., resigning after election, Pence pardon, etc…. but even that won’t help him for crimes uncovered after next admin takes over or state crimes) https://t.co/J5r1wjKwLW

In fact, technically he’s what you call a flight risk.

1/ THREAD: @NSAGov, @FBI, @CIA — Trump is a profound flight risk. He will fly to Estonia, Latvia, Lithuania, or Poland — and travel the last few kilometers via motorcade to Russia. He may very well do so *prior* to the election. https://t.co/hUCP5x6bmq

And oh, the places he can go!

There will be countries where he is safe from extradition, if that is what he is worried about. Many of those countries are Muslim countries. They say irony is dead. It is not. https://t.co/rg1SbfRfmE

Should he flee, he won’t be the first leader to do so. Someone brought up Ukraine’s Viktor Yanukovych, who had to flee to Russia.

When Ukraine’s disgrace Putin puppet pres got cornered he flew out planes of money and then himself settling under Putin’s protection in Moscow. I said years ago Trump if out of all options would end up being his neighbor. Just please watch Treasury and make sure he doesn’t flee https://t.co/2CFgGJ8azm

Some questioned his game plan.

But others wondered if he’s actually being smart.

This is not about him really leaving. This is him engaging enotionally with followers, playing the victim and summoning them to action to avoid a loss of their polestar. https://t.co/Ow50tUzp6B

But for now, let’s stay optimistic and wish him well.