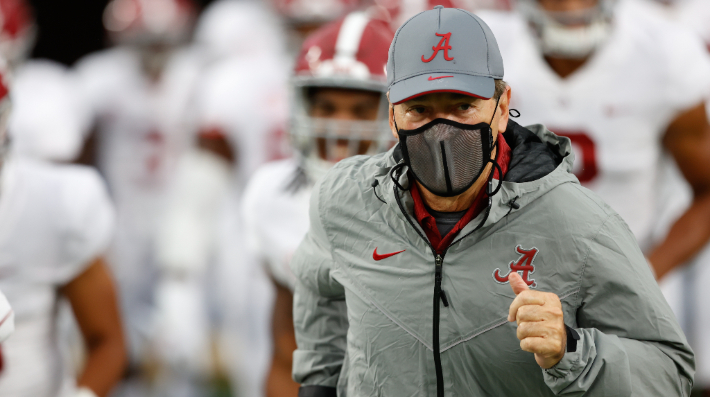 The college football world received a gigantic piece of news earlier this week when Alabama coach Nick Saban tested positive for COVID-19. Saban was asymptomatic, but the test meant he would be unable to coach the second-ranked Crimson Tide on the sideline on Saturday evening, when the team played host to No. 3 Georgia.

However, because Saban did not show any symptoms, the door was open for him to coach the team in some capacity if subsequent negative tests went his way. And on Saturday afternoon, we learned that that is, indeed, the case, as the team announced that Saban repeatedly tested negative, making him eligible to coach the game and raising the belief that his test showing he had the virus was a false positive.

Due to the fact that Coach Saban has remained completely symptom-free and had five negative PCR tests, split between two separate labs, the initial test from Wednesday is considered a false positive under the SEC protocols.

The statement laid out the protocols for testing that Saban received, which included getting checked every day at 7 a.m. per SEC protocols, along with additional, separate testing checked by a second lab to confirm the findings.

Obviously the good news here is that Saban is healthy, because as a soon-to-be 69-year-old man, the risk he carries with this virus is a little higher. As such, he has the all clear to coach his team this evening, with the festivities kicking off in Tuscaloosa at 8 p.m. EST on CBS.