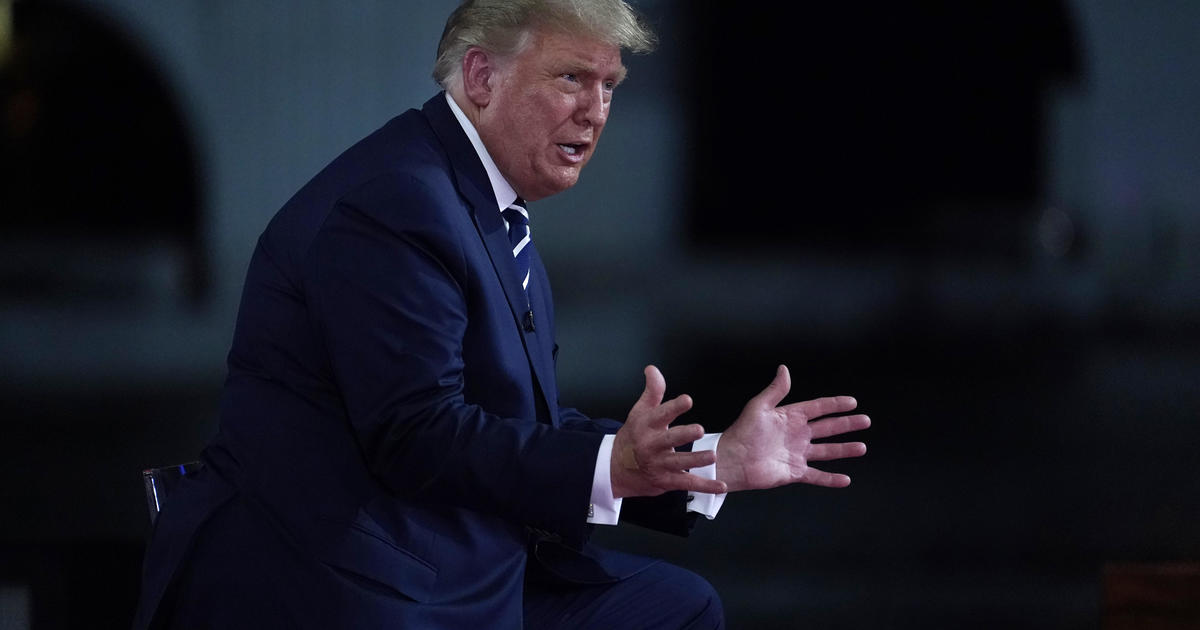 Both presidential candidates appeared in separate town halls on competing networks on Thursday night after President Trump said he would refuse to participate in a virtual debate. President Trump was in Miami at a contentious town hall hosted by NBC News’ Savannah Guthrie.

When asked if he would denounced QAnon, a right-wing conspiracy theory group, and Mr. Trump refused to unequivocally do so.

Guthrie said QAnon followers believe in a conspiracy theory “that Democrats have a satanic pedophile ring and you [Mr. Trump] are the savior of that.”

“Can you just once and for all state that this is not true and disavow QAnon in its entirety?” Guthrie asked.

“I know nothing about QAnon, I know very little,” Trump said.

“I just told you,” Guthrie replied.

“They believe it is a satanic cult run by the deep state,” Guthrie cut in.

Mr. Trump said what he does know about is “antifa and the radical left.”

“Why not just say it’s not true?” Guthrie pressed.

“He may be right, I just don’t know about QAnon,” Trump replied.

“You do know,” Guthrie rebutted.

Mr. Trump then insisted he doesn’t know and told Guthrie to continue her questioning. “What I do hear about [QAnon] is that they’re very strong against pedophila, and I agree with that,” he continued.

When Guthrie pressed him again, Mr. Trump again said he does not know about the QAnon theories.

According to the Anti Defamation League (ADL) “QAnon is a wide-reaching conspiracy theory popular among a range of right-wing extremists and even some public supporters of President Trump.” The group first surfaced on 4chan in 2017 and adherents follow “the anonymous Q.”

Followers believe “world governments are being controlled by a shadowy cabal of pedophiles (who will eventually be brought to justice by President Trump),” according to the ADL.

According to Southern Poverty Law Center (SPLC), antigovernment extremists, “including some who’ve committed violent acts, are increasingly subscribing to and propagating the QAnon conspiracy theory, which asserts that pro-Trump forces will soon take down the so-called deep state.”

QAnon followers subscribe to the belief that  a “deep state” took over decades ago. Deep state is used to explain everything from “Pizzagate” to ISIS to the prevalence of mass shootings and the JFK assassination.

Mr. Trump has refused distance himself from QAnon in the past. In August, a reporter asked him: “Mr. President, at the crux of the theory is this belief that you are secretly saving the world from this Satanic cult of pedophiles and cannibals. Does that sound like something you are behind, or a believer in?”

Mr. Trump replied: “Well, I haven’t heard that. But is that supposed to be a bad thing or a good thing? I mean, you know, if I can help save the world from problems, I’m willing to do it. I’m willing to put myself out there.”

But Mr. Trump not only refused to denounce a conspiracy theory group, he has personally perpetuated conspiracies on his own social media accounts. “Just this week, you retweeted to your 87 million followers a conspiracy theory that Joe Biden orchestrated to have SEAL Team 6 kill to cover up the fake death of Osama Bin Laden. Now why would you send a lie like that to your followers?” Guthrie asked.

“I don’t get that, you’re the president, you’re not someone’s crazy uncle who can just retweet whatever,” Guthrie said. Mr. Trump doubled down that it was a retweet.