Londoners would be “punished” by proposals including having to pay £15 to drive in the suburbs, the mayor has claimed, after talks on a fresh funding settlement for the capital in the face of Covid-19 failed to reach agreement.

Negotiations for a settlement for Transport for London will continue after the government offered to extend the existing £1.6bn bailout terms for two more weeks, just before a deadline to avert financial collapse.

Although TfL said it was “edging towards a deal”, City Hall said the government’s proposals were “not right” – including dropping free travel for under-18s and significantly widening the congestion charge zone to the outer suburbs.

The mayor, Sadiq Khan, has sought another £2bn to carry London through until next April, to cover lost revenue, mainly from Tube journeys as passengers were told to stay away from public transport due to coronavirus. 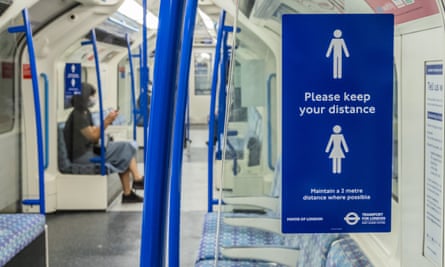 Passenger numbers on London’s Tube fell to 5% of the usual level during the lockdown earlier this year. Photograph: Guy Bell/Rex/Shutterstock

TfL confirmed a funding proposal had been made by the Department for Transport last Friday with conditions attached, and talks would now continue until up to the end of October. Commissioner Andy Byford said the two parties were “edging towards a deal” and the extension was “sensible and pragmatic”.

However, the deputy mayor Heidi Alexander said neither she nor Khan “can see how it’s right to charge people £15 to drive a mile from Wandsworth to Clapham, or Catford to Lewisham from October next year … That’s in effect what the government has told us they want.

“We can’t take free travel away from under 18 when lots of people are facing genuine hardship. Government needs to come to the table and talk sensibly about this.”

A DfT spokesperson said it had agreed to extend support to allow further time for negotiations, adding: “These discussions will ensure London has a safe, reliable network. It would be inappropriate to disclose further details at this stage.”

TfL normally receives more than 70% of its income from fare revenue. Its finances were shredded once passengers were asked to stay home and avoid public transport after the Covid-19 pandemic started and Tube use dropped to 5% of normal levels. It is now at 35%, and bus use at 60%, of pre-pandemic levels.

Khan has described the existing £1.6bn funding agreement, which was due to expire on Saturday, as a “sticking plaster”. Speaking on LBC on Friday, Khan accused the government of trying to “punish Londoners for doing the right thing”, adding: “The government gave the privatised train operators 18 months’ worth of grant without strings attached … but is saying to TfL we’ll give you a six-month deal with strings attached.”