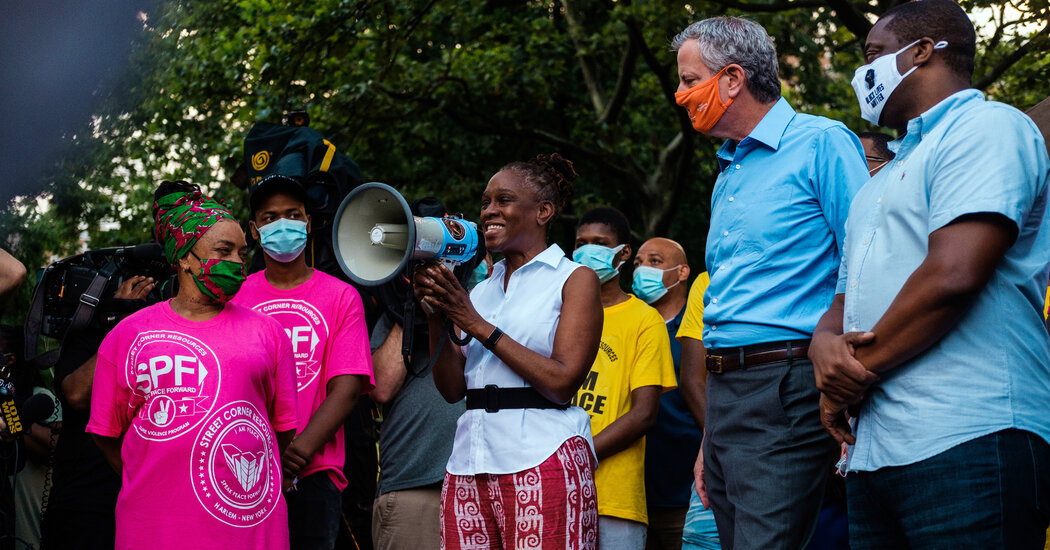 For much of Mayor Bill de Blasio’s second and final term, it seemed a foregone conclusion that New York City had not seen the last of his family. His wife, Chirlane McCray, was openly toying with the idea of running for public office.

Earlier this year, she narrowed her sights to one office: Brooklyn borough president.

But that was before New York City was shaken by protests against discriminatory policing and battered by the coronavirus, and the resulting fallout — a rise in shootings and homicides, huge revenue shortfalls and shuttered schools and businesses — has vexed Mr. de Blasio, all but cementing his unpopularity with voters.

Ms. McCray has also invited scrutiny through her leadership of ThriveNYC, a nearly $1 billion mental health initiative that has been criticized as wasteful, overly ambitious and lacking any tools to measure its success.

With the viability of a political campaign suddenly in doubt, Ms. McCray said on Thursday that she would not be running for office next year and planned instead to focus on the city’s recovery during Mr. de Blasio’s final year as mayor.

“I thought about running for Brooklyn borough president. I thought about it long and hard and decided in this urgent moment there’s so much work to be done, right now, right here where I am,” Ms. McCray told the NY1 anchor, Cheryl Wills. “And my priority really is to see this through — my priority is serving the people of New York.”

To many, the announcement felt like the beginning of the end of the de Blasio era in New York.

“We have a horrible economic downturn, the pandemic, and schools are in flux,” said Robert Cornegy Jr., a councilman from Brooklyn who is running for the borough’s presidency. “That’s not helpful to the case for electing the mayor’s wife.”

Until recently, it seemed as if Ms. McCray was expanding her visibility in the administration.

There was a $9 million effort in Brooklyn to help new mothers. Mr de Blasio named her to head a commission to create more diverse monuments. She was also a co-leader of a commission on racial justice that Mr. de Blasio created in the wake of the health and economic disparities further exposed by the pandemic.

Recently, Ms. McCray launched a podcast about mental health with BRIC, a media and arts institution in Downtown Brooklyn.

“I became more comfortable being out front in my role as first lady,” Ms. McCray said in an interview Friday about her activities and decision to explore a run for borough president.

Ms. McCray said she is proud of the work that ThriveNYC has done, and she said she saw the role of borough president as a way of continuing that.

“I spoke to a couple of dozen people about the fact that I was seriously considering running, and I was pleasantly surprised to find that there was a lot of support,” she said. “Of course you can’t judge by what people say, you have to judge by what they do.”

But the pandemic seemed to damage the mayor’s political capital. The mayor and Ms. McCray had been calling labor and ecumenical leaders recently about her candidacy, and the response was unenthusiastic, according to several people familiar with the conversations.

“Her prospects of success were tied to the work that the mayor was doing,” said Antonio Reynoso, a councilman from Brooklyn who is also running for borough president. “In some ways, the election would have been a referendum on him.”

The pandemic had recently eroded one of Mr. de Blasio’s longest and strongest alliances: his ties to the Orthodox Jewish community in Brooklyn, which he represented when he was a councilman.

Some members of the community have criticized Mr. de Blasio and Gov. Andrew M. Cuomo as singling out their community for closing schools and businesses to help prevent an uptick in coronavirus infections

David G. Greenfield, a former member of the City Council who is now chief executive of the Metropolitan Council on Jewish Poverty, said he recently received a call from a candidate for Brooklyn borough president who wondered if Ms. McCray would control the Orthodox Jewish vote.

“I said that may have been the case six months ago, but now the mayor’s relationship with the Orthodox community is at the lowest point it has been at since his time in public office,” Mr. Greenfield said. “I wouldn’t say it’s the end of his administration, but its the beginning of the end.”

“Despite what some elite prognosticators have said, that base is still there and it still strongly backs the mayor,” Mr. Neidhardt said. “It would have backed the first lady as well.”

Her withdrawal from the race may actually have some benefits for the last 14 months of the mayor’s term, said Rebecca Katz, a former adviser to Mr. de Blasio and Ms. McCray.

“With the door closed on the possibility of Chirlane running for borough president, it may become more clear to the mayor that what he’s doing now is his legacy,” Ms. Katz said. “Maybe that will mean there’s some renewed energy there.”