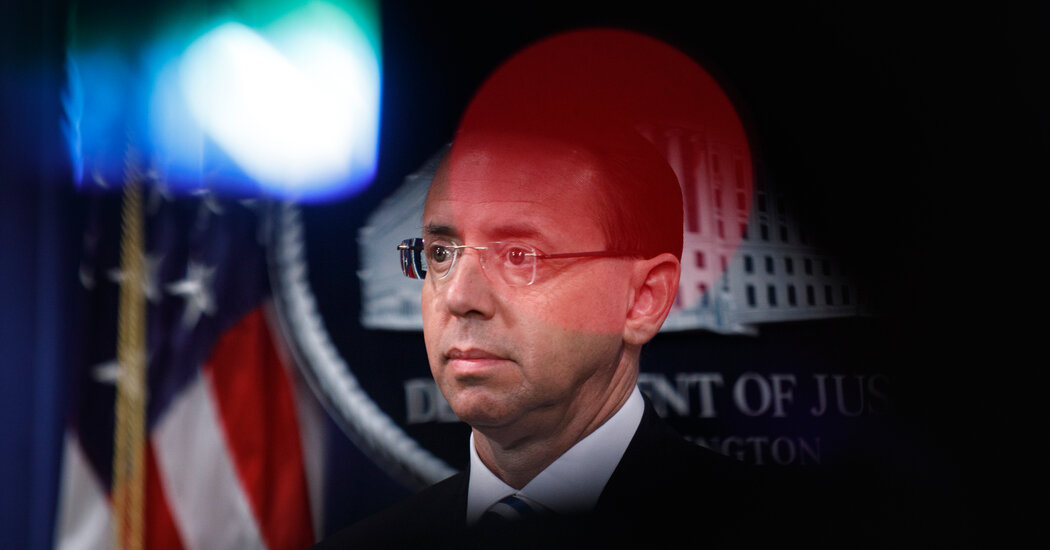 What, in the Trump era, does the face of complicity look like?

But sometimes it’s someone who’s less well known. The face might register, but the name escapes you. It’s just a man in rimless glasses and a dark suit.

I’m talking about Rod J. Rosenstein. Years from now, I think we should remember the men and women like him, and the role they played in this administration’s vilest deeds.

Last week, The Times reported that the inspector general of the Justice Department, Michael E. Horowitz, has prepared a draft report based on an investigation of his agency’s role in the Trump administration’s family separation policy of 2018.

Before discussing his findings, let’s start by calling this policy what it really was: A state-directed effort to intern immigrant children, some exceptionally young — so young that they were still breastfeeding, so young that they were preverbal, so young that they were not yet aware of their parents’ names. To wrench these children from their mothers and fathers and detain them for months on end required a bureaucracy, with cruel architects at the top — specifically, the former attorney general, Jeff Sessions, and Stephen Miller, Trump’s senior policy adviser — and a dedicated pyramid of helpers directly below.

Rosenstein, the former deputy attorney general, was close to the peak of that structure. That’s what the reporting by my colleagues Michael D. Shear, Katie Benner and Michael S. Schmidt made clear, as did reporting this summer in The Guardian.

On a conference call with the Justice Department in the spring of 2018, five U.S. attorneys from our border states — three of them Trump appointees — expressed their alarm about the “zero tolerance” policy of prosecuting all undocumented immigrants, even if it meant separating them from their sons and daughters. One, John Bash, specifically said he’d declined to prosecute two such cases, because they involved children under the age of 5.

Rosenstein was the one who told him he was wrong to do so. (“Those two cases should not have been declined,” Bash wrote to his staff immediately following the phone call.) There was no categorical exemption based on age. Even parents with babies could be prosecuted. The headline from The Guardian’s own investigation made this point rather bluntly: “Revealed: Rod Rosenstein advised there was no age limit on child separations.”

“I think this is the structural question that’ll last the longest,” Lee Gelernt, the A.C.L.U. lawyer who in June of 2018 made a successful argument for ending family separation in federal court, told me. “We know the political people at the top who wanted a policy of family separation, and it’s horrific. But where were the career people? How many pushed back?”

Rosenstein’s complicity in this machine was ugly, but it was by no means unique. Top officials at the Departments of Justice, Homeland Security, and Health and Human Services all played a role. They were all sowing chaos, inflicting cruelty and causing unfathomable trauma at the behest of a small, vicious cadre up top.

Gelernt told me that he had to make a hard strategic decision when arguing his case against the Trump Justice Department. In order to get families reunited quickly, he was not going to challenge the administration’s right to prosecute these immigrants. He accepted that they broke the law. And like any American parent who breaks the law, he accepted that they typically had to be separated from their children while in jail.

Instead, his argument was this: The jail time for these misdemeanors was usually a matter of days. So why were these parents not being reunited with their children afterward? “What became clear,” he told me, “is that they never had any intention of reuniting them until the parent gave up and was deported, if ever.”

The federal judge in San Diego agreed, saying the government’s behavior “shocks the conscience,” that the separation policy violated due process and that all separated families had to be reunited within 30 days.

But what galls Gelernt now, after seeing the Times report about the inspector general’s investigation, is that his suspicions were right all along: Separating families was the objective of the Trump administration’s zero-tolerance policy, not a byproduct. The children were the targets of the policy, not collateral damage. “We need to take away children,” Sessions reportedly told the local U.S. attorneys.

No president before Trump had ever dared go that far. Which is not to say that Trump’s predecessors handled immigration gingerly: When the number of immigrants surged at the border in 2014, President Barack Obama responded by building more detention facilities and holding families indefinitely — though still together — and faced a legal backlash.

But Trump’s policy was something altogether different. It was child abuse, plain and simple. “That’s why it’s so chilling,” Gelernt told me. “D.O.J. officials apparently declined to exempt even cases with a baby.”

In response to the inspector general’s report, Rosenstein’s former office offered a 64-page response, according to the Times report.

In a separate letter to The New York Times, Rosenstein took care to note that he was not responsible for developing the “zero tolerance” policy; he merely clarified what it meant. “I correctly told U.S. Attorneys that the Attorney General did not want them to decline cases for categorical reasons,” he wrote, “but I expressly advised U.S. Attorneys that they were NOT required to prosecute every immigration defendant arrested by the Department of Homeland Security.”

It’s a very cautious, lawyerly statement. But note what Rosenstein did not deny: That he refused his U.S. attorneys permission to automatically exempt undocumented immigrants with young children from prosecution. In his letter, Rosenstein also said that any claims that “I did not care how young the children were, or that I ignored concerns about the children’s welfare are unequivocally not true.”

But if Rosenstein really harbored concerns about the family separation policy, why wasn’t he noisier about them in public? He could have registered his objections and left. He did have other options. He has a degree from Harvard Law. He had a distinguished record of public service that long preceded his association with Donald Trump. He served in both Bill Clinton and George W. Bush’s Justice Departments; in 2005, he became the U.S. attorney for the district of Maryland, and he was one of only three U.S. attorneys retained by Obama.

But what we have lately learned about Rosenstein is that he is a very canny political operator. He has a gift for threading needles that even a tailor would envy.

While serving in the Trump Justice Department, for instance, he wrote a memo recommending the removal of James Comey as the head of the F.B.I., and he later defended his boss, William Barr, after he misled the public about the results of the Mueller investigation. But he also had the presence of mind to appoint Robert S. Mueller in the first place — and, though he has denied it, to question Trump’s own presence of mind. (It has been reported that he suggested secretly recording Trump’s ravings in order to expose him as unfit to lead.)

So Rosenstein is not a caricature of a villain, necessarily. You might even say he’s a man of a rather banal morality. But when push came to shove, he seems to have done exactly what it took to survive in the Trump Justice Department — which was to tell U.S. Attorneys that they should not decline to prosecute undocumented immigrants just because those immigrants had very young children.

Last week, the Trump Justice Department made it possible to investigate specious claims of election fraud, a move that not only departs from precedent but also undermines confidence in democracy itself. Who can be relied upon to stop such a thing?

Yet when it was Rosenstein’s turn, he did nothing to stop government-orchestrated cruelty. Instead, he simply did his job.