The Queen has carried out her first public engagement outside a royal residence since lockdown but there was criticism over her decision not to wear a mask.

She visited the Defence Science and Technology Laboratory (Dstl) at Porton Down near Salisbury with her grandson the Duke of Cambridge.

Neither royal wore a face covering, but Buckingham Palace said medical advice had been sought and necessary precautions taken for the visit.

The Dstl said it had tested all 48 people who were due to come into contact with the royal visitors and all had tested negative for Covid-19. Social distancing was maintained throughout the visit. Prince William and the Queen, 94, arrived separately.

Though face coverings are mandatory on public transport and in public places such as shops, the government also recommends wearing a mask in indoor places where social distancing may be difficult and where the public come into contact with those they do not normally meet. 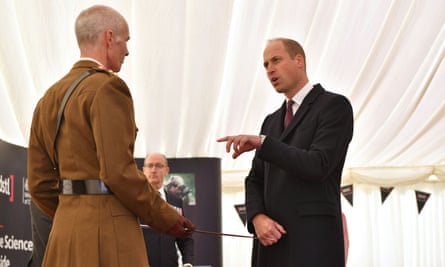 Prince William presents Col Mike Duff with the Firmin Sword of Peace for the department’s work on the novichok incident. Photograph: Reuters

A Buckingham Palace spokeswoman said: “Specific advice has been sought from the medical household and relevant parties, and all necessary precautions taken, working closely with Dstl.”

It was not known when Dstl staff were tested, except that it was very recently. Kensington Palace declined to comment, but it is understood that William was tested and returned a negative result ahead of accompanying his grandmother.

However, Graham Smith of Republic, a group that campaigns for an elected head of state, said: “The Queen should be setting an example. I can’t see how this fits with the rules everyone else is expected to follow, so the palace needs to come up with a rules-compliant explanation.”

The maskless monarch also prompted comment on Twitter, including from the TV host Piers Morgan, who tweeted: “Sorry, but this is not a smart move by the royal family as the virus rages and the country heads into another lockdown.”

John Smith, the son of the late rights activist and RAF veteran Harry Leslie Smith, wrote: “By not wearing a mask the Queen sends a very strong and stupid message that will have the antimask brigades clapping with joy.” 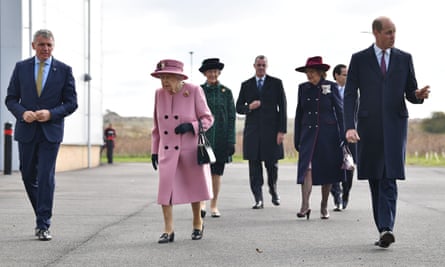 But others defended the decision. Joe Little, managing editor of Majesty magazine, said: “The Queen and the Duke of Cambridge will inevitably be criticised for not wearing a face covering, but medical advice was sought while the royal visit was being planned and social distancing seemingly was maintained throughout.”

He added: “The Queen’s first official engagement away from a royal residence for the first time in seven months delivers a visible and timely reassurance that daily life can continue during the pandemic in a modified form, even for someone in their 95th year.”