What’s the opposite of ASMR? The antidote to lulling, whispering comfort? There may not be an elegant term for the jangling, queasy, uncanny chills induced by certain combinations of materials and textures, but by God does Polly Morgan understand the territory. Her exhibition How to Behave at Home is gloriously discomfiting: a multi-hazard zone of phobias and sensitivities. 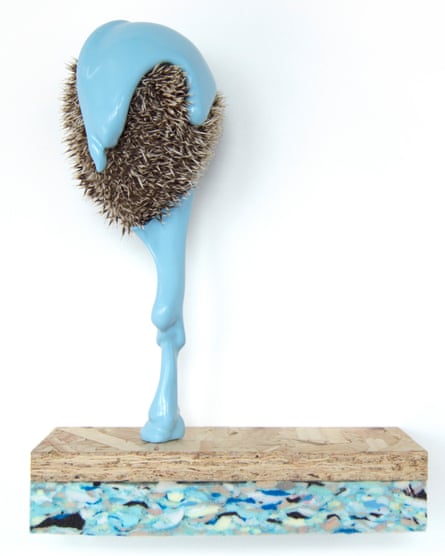 In Unite in a Common Goal, an extended yellow-scaled snake body squirms into the hollow space of a polystyrene slab that once cradled some expensive piece of electronic kit. A seething tangle of grey and white scaly bellies bulges through a hole at the centre of a sandy concrete square in Understand Your Audience, as though the proverbial nest of vipers has burst through the wall of a house. A block the size of a small microwave oven is neatly bisected, with a cameraphone perched on top shining its torch into the gap to reveal more serpentine tangles in Screen People.

Morgan does work with real snakes but these three are modelled, painted and decorated with materials used by nail artists: luscious, shimmery, creepy as hell. They look like barely contained anxiety, that roiling intestinal sensation of the world tipping on its axis.

These and the other recent snake works – Trace Your Route and Consider the Risk­ – carry titles apparently lifted from how-to influencer listicles. Because no doubt there is a connection between the snakepit of concern knotting your entrails, and the contortions demanded of us to fit in, to broadcast the correct opinions, the right lifestyle, the acceptable balance of perfection and humility.

Buzzwords also infect three small wall-mounted works – two made with roadkill hedgehogs. Here the tension arises less from the effort to cram an unruly body into a confining space, than the grotesque interplay of materials. In Produce Valuable Content, Mrs Tiggywinkle’s mortal remains appear suspended within a splurt of custardy blue plastic above a raw slab of chipboard and blue-flecked foam composite. If the hedgehog epitomises the adorable homely romanticism of the British countryside, then this feels like an undignified repurposing (although arguably a better exit than being pecked out of fissures by crows on the M6). 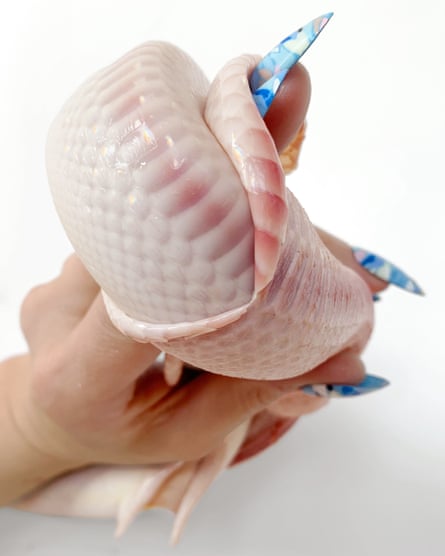 What is natural, what artificial, and what belongs where? Snakeskin has long been prized for fashion accessories. Hedgehog skin less so. Serpents of the fat, jewel-toned types favoured by Morgan are exotic: there is less taboo about wearing their skins than there is a cutesy native (or, God forbid, domestic) animal species. Both hedgehog and snake are imperilled by the incursion of human technology into their habitat. Urban life involves running battles to keep the wild at bay, be it cat fleas, cloth moths, Japanese knotweed, rats, mosquitos or bold foxes.

Modern ecophilosophy argues that we can’t make a true distinction between nature and human society: we’re all interdependent. The ultra-illusion of manipulated image, of online personas, squeezed, perfected, and filtered – the “me” of social media – floats beyond it all in a fictional zone, as implausible, on reflection, as a hedgehog washerwoman wearing a bonnet.

Home, here, becomes a site of attack. There is pressure from within to behave with civilised decorum and to fight urges that might upset the balance of a small social group. There is pressure from without to conform to the standards set within the shared fictional space we have constructed for ourselves online, and to which much interaction has been confined over the last six months.

How to behave at home? Honestly, it’s like Halloween came early.

• Polly Morgan: How to Behave at Home is at the Bomb Factory, London until 2 November.