‘This system breaks you apart. It is designed just like slavery to tear you apart. And instead of using the whip, they use mother time … The experience itself is just like when they used to hang people but barely hang them, and leave their feet just tiptoeing around in the mud.” These are the words of Sibil Fox Rich, compelling subject of new documentary Time. She is talking about the US prison system, of which she has some experience. In 1997 she and her husband Robert Richardson were convicted of a bank robbery in Louisiana. She got 13 years but was released after three and a half; Robert was dissuaded by his lawyer from taking a plea deal. He got 60 years.

That sentence would seem outrageously punitive elsewhere, but, for a black man in Louisiana, it is practically routine. “The white man keeps you there until he figures it’s time for you to get out,” says Rich’s mother resignedly. But Rich refused to let the system break her family apart. Instead, she campaigned for her husband’s release, in between raising her six sons, advocating for other families of the incarcerated, and building a career as a powerful public speaker and self-proclaimed “abolitionist”.

America’s prison system, its impact on black communities and its continuity with historic slavery, has come under renewed scrutiny in recent years, thanks to works such as Ava DuVernay’s 13th, Michelle Alexander’s The New Jim Crow, Douglas Blackmon’s Slavery By Another Name, and Eugene Jarecki’s The House I Live In. Time, directed by Garrett Bradley, is something different. Rather than giving us the big picture, it gives us the personal, emotional experience, and it shows how incarceration, like slavery, permeates every aspect of life, for those on the outside as well as those behind bars. Intimate and stirring, it is the work of an experimental artist more than a journalist – and has been recognised as such by awards juries since its premiere at this year’s Sundance film festival, where it won Bradley the documentary directing prize. 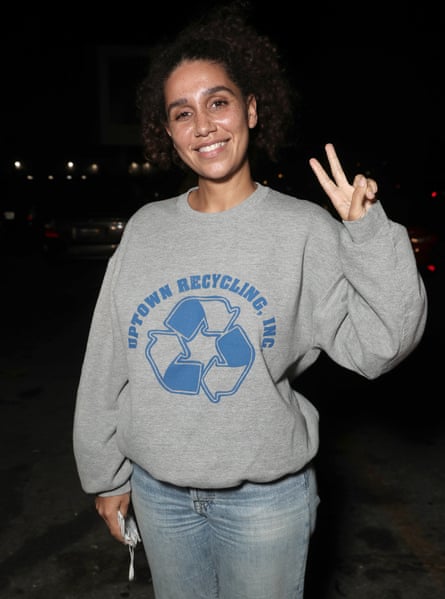 ‘I don’t go out looking for stories, I meet people’ … director Garrett Bradley at her film’s premiere in Los Angeles this month. Photograph: Todd Williamson/January Images/Rex/Shutterstock

The title is double-edged. As much as Time is about “doing time”, it is about time itself: time passing, time wasted, time remaining. What really enables Time to explore these themes is the 18 years’ worth of home videos that Rich shot while her husband was in prison, which Bradley skilfully integrates with her own footage. We see Rich’s twin sons develop from a bump in her belly to college students. We see the birthdays, the playtimes and the family gatherings – things their father has missed.

“They have absolutely no idea what it means to have a father in the house,” Rich muses to the camera. And we see Rich herself grow from a regretful but spirited young woman into a resilient, complex older one – albeit with vulnerabilities still close to the surface. In one memorable scene, she stands before her church congregation and asks for forgiveness from all those she has made suffer. It’s just one of many scenes that’s missing from collective notions of crime and incarceration.

“I don’t go out looking for stories; I meet people. I develop relationships with them, and that’s how the projects come to fruition,” says Bradley, who is currently in her native California, but has lived in Louisiana for the past 10 years. She doesn’t feel her approach is any better than the factual documentary one. The two can work in tandem to highlight the issues at hand. Besides, she adds, “don’t you think that emotions are facts? Facts don’t always become emotional, but I think in our bodies and our minds, the things that we feel become the truth.”

Had she taken a different approach, the film would never have happened. Bradley met Rich via her 2014 debut feature Below Dreams, a semi-documentary story about New Orleans millennials, cast via Craigslist. When one of her players was arrested, Bradley became close to his girlfriend, named Aloné. In 2017, she made a documentary short about Aloné, who was now engaged to her incarcerated boyfriend. That led her to Rich, who was effectively 18 years further down the same road. “She was maintaining her level of hope, but I think she was starting to feel kind of broken,” says Bradley. “Her patience had been tested on an unprecedented level.”

Bradley then began making another short documentary about Rich, she explains. On the final night of shooting, when she was packing up her gear, Rich said: “Hold on one second.” Bradley recalls: “And she went to the other room and came back and had this small, black duffel bag that was filled with mini-DV tapes, and she said, ‘I haven’t watched this stuff since I shot it and I hope it’s of some use to you.’”

It was an emotional moment, says Bradley. Not necessarily in the context of her film (although it enabled it to become a feature), but in the trust Rich was placing in her, to safeguard her memories. In that sense, Time is more a collaboration between the two women than an orthodox documentary. That’s the way she works, says Bradley. “I don’t put work into the world that people who are in it haven’t seen before the rest of the world has seen it. I think that’s incredibly important, to get their blessing on something and it doesn’t challenge the idea of authenticity at all. To have something be genuinely collaborative doesn’t take away from it being authentic, or real, or even objective.”

That level of trust is evident throughout Time (spoiler warning). Not least in the cathartic scene when Robert is finally released from prison, having had his sentence commuted. Fox meets him in a white limousine. They lock into a passionate embrace in the back. Next thing you know, they have no clothes on and are gazing at each other in postcoital bliss. It’s tastefully handled, but you’re struck by the fact that whatever has been going on, it has been going on in front of a cameraperson filming from the front seat.

That was Bradley’s cinematographer, Nisa East, she explains. “I was driving in my little Honda Civic right behind their car, driving and texting, and Nisa saying, ‘It’s getting really hot and heavy in here. You sure you want me to keep filming?’ And I said, ‘It’s not up to me, it’s up to Fox and Robert. Let them guide you.’ So much of being a film-maker is energy work. But what was most profound about that scene is that people have come to me and said it wasn’t till that moment that they understood how much was lost.”

There is another sense in which Bradley felt responsible when Rich handed over her home videos: “In Louisiana specifically, where Katrina obliterated a lot of family history, a lot of people don’t have their past documented any more. And that feeds into ideas around the importance of the black archive in America. Oftentimes it is one of the only sources of evidence of who we are outside of an external gaze. It’s a form of resistance to have your own archive.”

‘The system wins when we stop being optimistic’ … a scene from Time. Photograph: Amazon Studios

Bradley’s work often crosses the boundaries between fiction, documentary and archive elements. Her 2017 film America, for example, sought to restock that lost archive of images of early 20th-century African American life, with filmed scenes of non-actors intercut with clips from 1913 silent The Lime Kiln Club Field Day – the oldest surviving feature with an all-black cast.

She has also worked in commercial film-making. She met Ava DuVernay on the set of her Louisiana-set series Queen Sugar, and later worked as assistant director on DuVernay’s Central Park Five series When They See Us. “Like Fox, and like all great leaders, she has a way of leading while also being generous and opening doors for people.” She has a solo exhibition at New York’s MoMA opening in November, and has been working for the past year on a documentary about tennis star Naomi Osaka. The future’s looking bright.

Things have improved for the Rich/Richardson family, too. Unlike many ex-convicts, Robert had a stable home to return to. He and Fox now campaign together for families affected by incarceration and for prison reform. Technically, he is still not free, though: he will be on parole and under curfew for the next 40 years, Bradley points out. “So again, as Fox has said herself, you commit one crime in the state of Louisiana as a black family and they have you for life.”

What do we gain as a society from excessive sentencing?

What would she say to those who refuse to sympathise with Richardson? He is, after all, a criminal, and to many Americans the mantra is still: You do the crime, you do the time. “I think it goes back to forgiveness,” says Bradley. “What do we gain as a society from excessive sentencing?” The sentencing is just the tip of the iceberg of an unjust system. “It’s not really about the crimes, it’s about many, many other things which we as a culture need to resolve if we want to live in a fair and just and equal society, and I believe that most of us do.”

There are grounds for hope, she believes. One is the fact that racial injustice and America’s prison-industrial complex are now mainstream topics. “They’re being talked about in the media in the same way that Batman is being talked about, right?” Attitudes are changing: John Bel Edwards, Louisiana’s governor since 2016, campaigned on prison reform and has granted 116 of the 164 clemency appeals made to him; his predecessor, Bobby Jindal, pardoned just 83 out of 738 during the previous eight years.

Another more lasting reason is time itself. The progress that has been made over generations is visible in Time. Fox Rich’s mother told her to dress nicely and try to make a good impression in court, and discouraged her from fighting for Robert’s release. Fox herself chose to take on the system. Now Freedom, one of her twins, is a political science student, studying the criminal justice system with a view to having a hand in transforming it. “I’m incredibly optimistic,” says Bradley. “I think we have to be. The system wins when we stop being optimistic.”

• Time is showing at the London film festival on 15 October.