For eight years, as the official White House photographer for Barack Obama, Pete Souza acted as a fly on the wall. Slyly observant, always in the room where it happened, Souza captured nearly two million images of a president upholding the gravity of the office, hundreds of which course through The Way I See It, a new documentary directed by Dawn Porter, who recently made John Lewis: Good Trouble. Obama in cabinet meetings, gathering himself on the couch, embracing Michelle backstage, bowing to let a young African American child feel hair just like his – Souza’s images often speak for themselves. So it’s perhaps surprising that in the years since Obama left office, the once-reticent Souza’s words, in the form of Instagram captions obliquely pointing to a distinct difference in decorum between two presidents, have turned attention from Souza’s camera to the man behind it.

Starting with Trump’s inauguration in 2017, Souza gathered a large following on his personal Instagram page by posting archival, nostalgic images from the Obama years alongside captions which coyly barbed the current administration. Over months, Souza became a Resistance-era icon of “throwing shade” – the art of conveying contempt through poised, detached suggestion, a term originating from queer culture and made famous by the 1990 ballroom documentary Paris Is Burning. Souza’s particular brand of shade – he says in the film he didn’t know the term when he started – contrasts stately Obama imagery with Trump’s generally deranged tweets. When Trump tweeted “WITCH HUNT” in February 2018, for example, Souza posted a picture Obama greeting young trick-or-treaters at the White House – “A different kind of witch hunt (Halloween 2010).” In May 2018, Souza posted an image of Obama warmly greeting military veterans, “back when our President was respected around the world and not unhinged by the rule of law”. By October 2018, Souza leaned into his pithy persona with a full collection of comparisons, Throwing Shade: A Tale of Two Presidents.

The Way I See It adapts Souza’s shade book into a compelling, achingly nostalgic portrait of Obama adjacency – Souza’s memories of observing a president at work mixed with behind-the-scenes stories for some of his most indelible images, as he recounts his arc from photojournalist to Boomer Instagram star. Notoriety on social media was certainly not the path Souza imagined when he turned in his 24/7, 365-day White House cellphone in January 2017; “I never intended to be vocal in any way about what’s going on,” he says in the film.

But the shredding of political norms under President Trump – norms of dignity and duty which underscore Souza’s vast trove of presidential images under both Reagan and Obama – changed his mind. “I thought it was worth giving up more of my anonymity to get this message out about what the office of the presidency means and the good people who held that office who I worked for,” Souza told the Guardian of his shift into the spotlight, from Instagram to coffee table book to documentary lead. All three projects highlight “the characteristics that we need as a president, and how that is so lacking today”, he added. “I just felt that it was worth giving up my anonymity to participate in this project.”

Even going through a fraction of Souza’s nearly two million photos over eight years, “you get a feeling for how orderly and focused and intelligent [the people are], what hard work was happening” at the time, Porter told the Guardian. “In that sense, pictures really don’t lie, when you have such a huge body of work.” 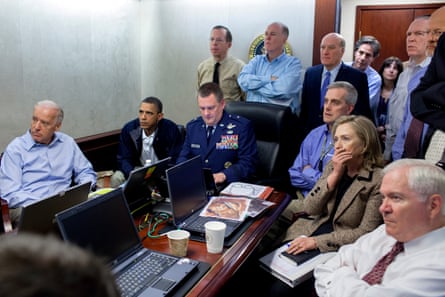 Souza’s camera found the president at work and at play – stricken in the moments before addressing the nation on the shooting at Sandy Hook Elementary in 2012, playing with his daughters in snow on the White House lawn or reviewing a healthcare speech graffitied with annotations. The truth hammered home by these pictures, said Porter, was that “until this presidency, we have always presumed and taken for granted that whoever was in the White House would be doing their best. However they saw fit, they’d be keeping the American people at the top of mind. And that’s just not the case today.

“The pictures and images that Pete made really put such a fine point on the contrast to what we have today.”

Amid recollections of the peaks and valleys of the Obama administration – the huddle before authorizing a raid to kill Osama bin Laden, or Obama’s singing of Amazing Grace at the funeral for victims of the racist church massacre in Charleston, South Carolina – The Way I See It traces the journey which trained Souza’s photography instincts. Growing up in the seaside town of New Bedford, Massachusetts, the son of a boat mechanic and a nurse, Souza didn’t develop an interest in photography until his time at Boston University. He cut his teeth as a photojournalist at local midwestern papers before landing at the Chicago Sun-Times in the 1980s. A chance connection soon launched him, still in his late 20s, into the White House photography office for Ronald Reagan, where he served until 1989 before returning back to photojournalism in Chicago.

Though he says he disagreed with Reagan on some of his policies – in particular, he says in the film, Reagan’s reluctance to act on the HIV/Aids epidemic – both Obama and Reagan shared common characteristics befitting the office’s power. “They were “respectful, moral”, he said. “They were passionate and empathetic, and the presidency to them was about us, not about them.”

Souza started working as Obama’s photographer when he was still a junior senator from Illinois – “a freshman senator with this kind of presence”, he says in the film, with two young daughters, ages six and three. The Way I See It plays, in part, like the coming of age of a family, from images of Malia and Sasha as toddlers, and Obama with staffers amid pizza and soda cans, ageing through higher offices and higher-stakes decisions. 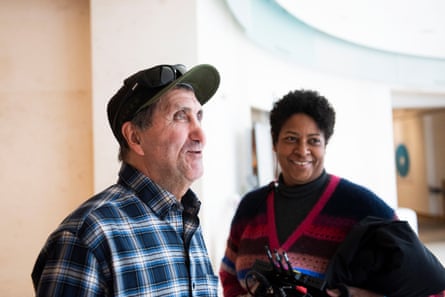 Those semi-private, less guarded moments are, the film subtly argues, yet another critical gap missing from the current administration. “As much as I criticize Trump, I really don’t want to criticize the photography office, because I don’t know the circumstances that they’re facing,” Souza said, though he noted that of the thousands of official images made available by the Trump White House, “there’s very few, if any, that I would characterize as ‘behind-the-scenes’ pictures. It’s mostly the reality show.”

Souza’s counter-programming on Instagram and The Way I See It has been cast as overly rosy Obama nostalgia, a sanded-down longing for a presidency that, though by any measure more stable and committed than the current office, was certainly not above fair criticism. But The Way I See It is more than nostalgia, Porter said; Souza’s guiding purpose as White House photographer was to capture the human being behind the presidency, and the film’s portrait of one administration advocates for an alternative to our current mess. “This film is not ‘President Obama was perfect,’ that’s not the point of it,” she said. “This is really uniquely aimed at a person who has devastated [the country]. We are all sitting at home with no end in sight in no small part due to the incompetence and disdain for American health and safety.