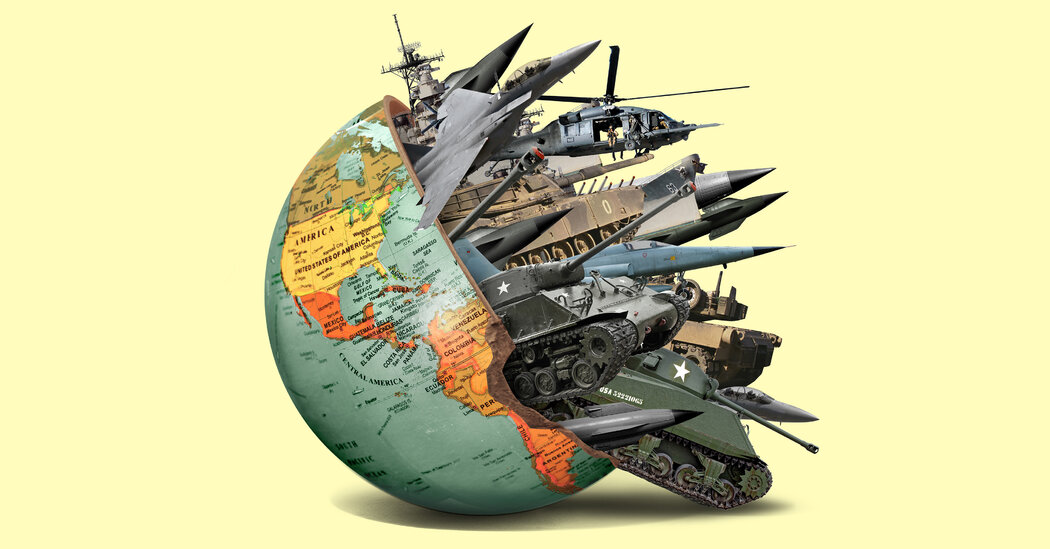 The next president, whoever he is, will not determine the future of America’s role in the world. Joe Biden does not recognize there is a problem. President Trump has no answers.

Three decades into the “post-Cold War era,” still named for what preceded it, the United States possesses no widely shared, deeply felt purpose for vast global power. America’s armed dominance today occupies a position similar to that of liberal immigration, free trade or private health insurance a decade ago. Taken for granted by political elites, it is nonetheless ripe for challenge beneath the surface.

One source of challenge comes from recent experience: America’s wars have projected mayhem across the greater Middle East and brought militarized violence home to American streets. Another source is prospective: As both liberals and conservatives rack up debt, they will face pressure to cut the gargantuan, trillion-plus sum lavished annually on national security.

But the most profound challenge is rooted deep in the past. If many Americans no longer understand why their country should police the world, it is for good reason: U.S. military supremacy has outlived its original purpose.

Eighty years ago, as it prepared to enter World War II, the United States made a fateful choice not only to pursue military supremacy but also to sustain it long into the future. This decision, tragic even then, has become immobilizing now. It has caused America’s leaders to see armed dominance as the only way the United States can relate to the world.

Both candidates for president pine to restore America’s righteous might circa 1945 — Mr. Trump with his paeans to Generals Patton and MacArthur, Mr. Biden with his pledge to defend the postwar “liberal international order.” Such nostalgia is precisely why we cannot confront today’s problems, which have their origin in our greatest moment as a nation.

Dec. 7, 1941, lives in infamy as the date when Japan attacked Pearl Harbor and brought the United States into World War II. By then, however, U.S. leaders were already planning to install America as the pre-eminent superpower in the epoch to come. It was a stunning event 18 months earlier — the fall of France to Nazi Germany — that led them to make the decision for dominance.

When France imploded within six weeks, Adolf Hitler suddenly bestrode Europe. He soon joined with fascist Italy and imperial Japan to form the Axis alliance. For the first time, Americans faced the credible prospect that totalitarian powers could ascend to primacy in Europe and Asia. Congress swiftly approved a vast military buildup and the first-ever draft in peacetime.

Yet acute observers recognized that the United States remained in an enviable position. “We shall not be invaded,” the columnist Walter Lippmann acknowledged as France collapsed. The oceans, fortified by air defenses, would thwart any attack launched from beyond the hemisphere. And the country’s economy was so self-contained, especially after the Great Depression, that it did not rely on foreign trade.

For these reasons, some Americans wanted to guard the entire Western Hemisphere against outside attack but go no further. An eclectic coalition — embracing the democratic socialist Norman Thomas, future presidents John F. Kennedy and Gerald Ford, and the anti-Semitic aviator Charles Lindbergh — rallied under the banner of “America First.” They hoped to uphold America’s traditional aversion to entanglements in the Old World (which might yet resist Axis rule without American intervention) and preserve the New World as a bastion of freedom.

But most foreign policy elites came to a different view. True, the United States could remain safe by steering clear of European power politics. Yet America, or its ruling class, aspired to more. It wished to interact and transact across the globe and to determine the direction of world history. Axis dominance endangered less the United States proper than its expansive vision of itself. If confined, America would become “a lone island in a world dominated by the philosophy of force,” President Franklin D. Roosevelt declared in June 1940. Such a fate, he warned, would leave the American people “lodged in prison, handcuffed, hungry, and fed through the bars from day to day by the contemptuous, unpitying masters of other continents.”

As Roosevelt spoke, the United States remained safe, prosperous and regionally dominant. But now that totalitarian powers had proved capable of attaining mastery in Europe and Asia, hemispheric leadership looked like “isolation,” even imprisonment. The United States could no longer usher in a new and better world unless it acquired the military power to impose its writ. And even if the Nazis had failed to attain primacy, who might try next? The United States would henceforth take up arms not only to defeat today’s totalitarians, but also and especially to deter tomorrow’s.

Global dominance, experts understood, would come at a terrific price: perpetual warfare and the transformation of America into something like an empire. “World domination by the United States and the British Empire” is how the military analyst Hanson Baldwin summed up the vision of his fellow planners in 1941. Public intellectuals were no less shy about the consequences. “Tyrannies may require a large amount of living space,” noted the publishing mogul Henry Luce in his essay announcing “The American Century.” “But Freedom requires and will require far greater living space than Tyranny.”

For half a century, American leadership fulfilled the objectives it set for itself. The United States won absolute victories over the Axis in 1945 and the Soviets in 1991, even as it meted out continual violence against Guatemalans, Vietnamese and others. So long as totalitarians stalked the earth, threatening to close off liberal intercourse and subvert “world order,” the United States retained a coherent rationale for its costly pursuit of armed dominance: better us than them.

When the Soviet Union collapsed, officials scarcely considered pulling back U.S. deployments and commitments. To the contrary, they extended them. The original dream of 1945 — of one world united under American supervision and following American terms — seemed to have arrived at last. Who could deny that in the “new world order,” proclaimed by President George H.W. Bush as he readied for war on Iraq, “there is no substitute for American leadership”? In any case, Russia was flattened. China remained poor. The United States cut its military spending and still exited the 1990s as the global colossus.

Yet the decades went on and no totalitarian rivals arose to take the place of prior nemeses. America’s new antagonists were hardly capable of gaining immense global power, no matter how U.S. leaders inflated weak states as the “axis of evil” or the terrorist threat as “Islamofascism.” In the early 21st century, if any power sought world domination, coercing others and flouting rules, it was the United States. Instituted to enable engagement across borders, American supremacy began to obstruct it. Today the United States deploys troops in more than 170 countries. Its military operates against terrorism in roughly 40 percent of the world’s nations. Dozens of countries are targets of U.S. sanctions.

Many in Washington now acknowledge excesses. Mr. Trump and Mr. Biden alike vow to bring endless war to an end. At the same time, leaders in both parties identify China as the adversary the United States has been missing — an expansive, crypto-totalitarian force whose containment could restore purpose to American power. Citing China’s “bankrupt totalitarian ideology,” Secretary of State Mike Pompeo heralds a new dawn for U.S. leadership. “Securing our freedoms from the Chinese Communist Party,” he said in July, “is the mission of our time.”

Is it? China is authoritarian and on the rise. But it is hardly Nazi Germany or Soviet Russia. China is open for business, whether on fair terms or not; the world’s largest trading nation makes a strange candidate for a totalitarian menace whose every activity closes off the earth. And unlike 20th-century rivals, China has long abstained from armed conquest. Though it threatens Taiwan, no one thinks it is about to invade U.S. allies like South Korea or Japan.

There was a time when Americans believed that armed dominance obstructed and corrupted genuine engagement in the world, far from being its foundation. That insight has been buried, now nearly beyond living memory. But it is perhaps not altogether lost.

Stephen Wertheim (@stephenwertheim) is deputy director of research and policy at the Quincy Institute for Responsible Statecraft and a research scholar at the Saltzman Institute of War and Peace Studies at Columbia University. He is the author of the forthcoming “Tomorrow, the World: The Birth of U.S. Global Supremacy,” from which this essay is adapted.