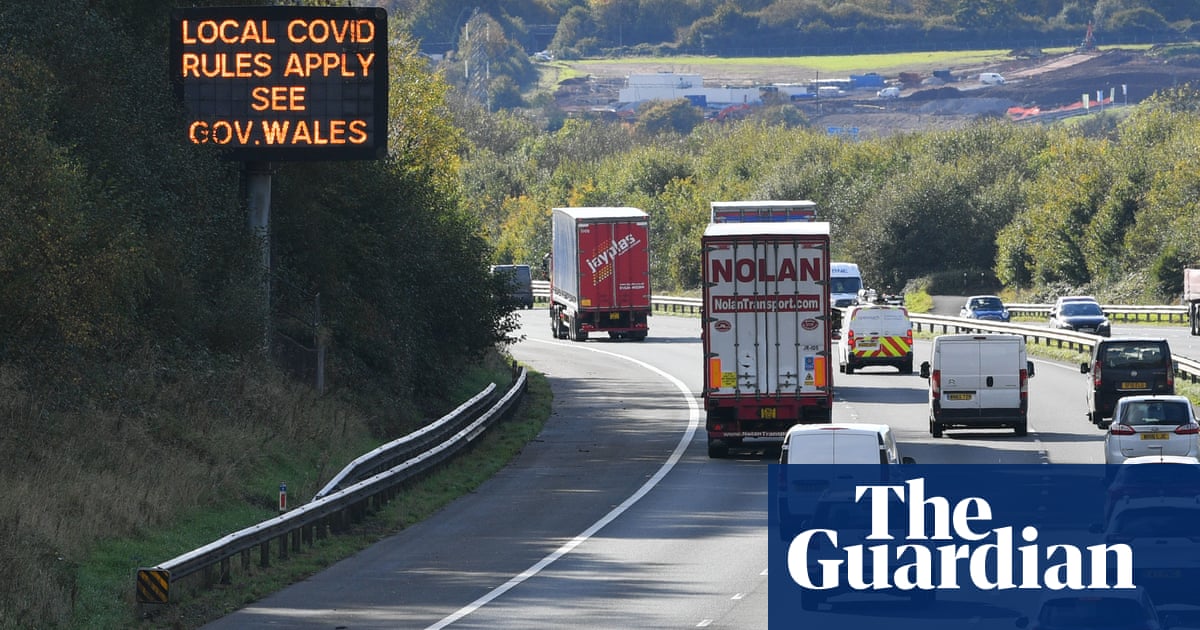 People who live in Covid-19 hotspots in England are to be banned from travelling to Wales, the Welsh first minister has announced.

Mark Drakeford said he had asked for the “necessary work” to take place to allow devolved powers to be used to prevent people from travelling into Wales from “high prevalence” areas.

Drakeford claimed people in Wales were “anxious and fearful” and were “clamouring” for action to be taken. He said the Welsh government would act by the end of the week if the UK government continued to refuse to stop people travelling from English Covid hotspots.

He said: “Evidence from public health professionals suggests coronavirus is moving from east to west across the UK and across Wales.

“Much of Wales is now subject to local restriction measures because levels of the virus have risen and people living in those areas are not able to travel beyond their county boundary without a reasonable excuse. I am determined to keep Wales safe.”

Drakeford said up to 80% of new infections were spread by super-spreaders. “It doesn’t take many people to come in from an outside area who are super-spreaders to have a very large effect.”

The move comes after the UK government ignored repeated calls from the Welsh government to stop people from travelling out of Covid hotspots in England. The UK government insisted it was enough to issue “guidance” that people do not leave hotspots.

Before Drakeford’s announcement, the Welsh government published a report on the genetic makeup of the virus that causes Covid-19, which it said suggested some Welsh cases could be traced back to England.

The Welsh health minister, Vaughan Gething, called the insights from the study, produced by experts from Public Health Wales and Cardiff University’s school of biosciences, “fascinating and terrible”.

Gething said: “What is clear from the data is that the easing of lockdown rules into August has corresponded with an increase in cases, which may partly be driven by imports from other parts of the UK and wider world.”

On Wednesday Public Health Wales reported 946 new cases of coronavirus – the largest number of positive cases on a single day in Wales during the pandemic.

There are more than 700 Covid-related patients in Welsh hospitals, 49% more than last week and the highest number since late June.

Police forces across Wales have begun to work out how to enforce a ban. There is no suggestion that checkpoints or roadblocks at the 160-mile border will be brought in. Even if the Welsh government did want this – and it does not – there are too many ways in and out to make this practical.

Dafydd Llywelyn, the police and crime commissioner for Dyfed-Powys, said on Wednesday it would not be possible to completely close the border. But other tactics are available, including setting up road checks within Wales and following up tips from members of the public.

He gave an example of the current inconsistencies. Dyfed-Powys officers recently issued fixed-penalty notices to three men who had driven out of Caerphilly for a day out. But the police had not been able to stop a coach-load of people from a hotspot area in the north of England visiting Tenby in Pembrokeshire, an area of low Covid incidence.

Llywelyn said: “The police are ready to protect our local communities.” He said that the first minister should have acted sooner – and accused the prime minister of putting wealth before health.

Arfon Jones, the North Wales police and crime commissioner, accused the prime minister of behaving “irresponsibly”. He said: “I can’t see us lining the border with patrol cars because none of the police forces in Wales have the resources to do that. But we will do our best, along with our partners in local authorities and health to enforce the regulations.”

The political angle to the situation has become charged. Drakeford is at pains to stress that there is nothing anti-English in his stance. But at first minister’s questions on Tuesday, Mark Reckless, the Brexit party leader, taunted Drakeford – whose government is a firm supporter of the union – by arguing Wales was “sleepwalking towards independence”.

Meanwhile, at her briefing on Wednesday, the Scottish first minister, Nicola Sturgeon, backed her Welsh counterpart and said she would write to Johnson on the issue to seek “urgent talks”.

Sturgeon drew attention to the Lancashire resort of Blackpool, revealing at her daily briefing that 94 people in the last week alone have tested positive having visited the seaside town.

Acknowledging that trips to Blackpool are “an annual ritual” for many Scots, she said the town was being mentioned in test and protect tracing “far more than any other location outside Scotland”, and that a separate incident management team had been set up to deal specifically with Blackpool-related infections.