Today a paparazzi photo of Billie Eilish without her usual baggy clothes has been shared on the internet, revealing – shock, horror! – the 18-year-old looks like she has a regular body like you or me.

The photo showed Eilish wearing shorts and a tank top, rather than her signature baggy clothing. And so a butt hurt man (apparently 29 and from the UK) took this opportunity to announce on Twitter: “In 10 months Billie Eilish has developed a mid-30’s wine mom body.” (The backlash was mercifully swift.)

Eilish is notoriously protective about her body image for this exact reason: even as a teenager, photos of her body have been used to either sexualize or shame her.

She has spoken about this pressure publicly. “Nothing I do goes unseen. If I wear what is comfortable, I am not a woman. If I shed the layers, I’m a slut … Would you like me to be smaller? Weaker? Softer? Taller? Would you like me to be quiet?” she asked in a video earlier this year, in which she takes off a big black hoodie and then submerges herself into black slime.

Eilish has largely rejected the societal pressure that many women feel – to be quiet, feminine and pretty – to such an extent that to say she rebels against modern beauty standards doesn’t quite cut it. 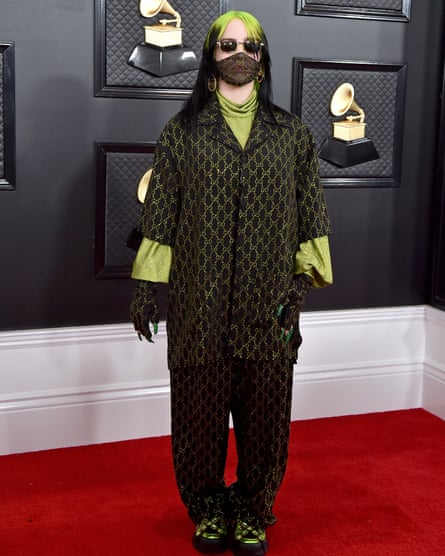 Billie Eilish at the Grammy awards on 26 January. Photograph: Axelle/Bauer-Griffin/FilmMagic

This is not the sk8er boi-esque image of the early naughts, in which women were asked to be provocative and tomboyish, but also, still hot.

And it couldn’t be more refreshing. My 16-year-old sister, who idolizes Eilish, gives 10 times less of a damn about what she looks like than I did when I was her age, at a time when it couldn’t be more important for young people to do so. My sister wears cat ears, big baggy hoodies and chains, fairy tutus, chunky sneakers and striped tights with each leg a different color. And all over her Instagram, her own message is plastered in her captions: “Stop caring about whether others think you look cool, and start worrying about whether YOU think you look cool.”

In a world where teenagers are asked to look at their faces through the prism of Instagram filters that make you look like you have plastic surgery; or at their bodies through the lens of a generation that has grown up watching the Kardashians and their belfies, it brings me great joy to see her so unbridled.

To see online trolls try to tear down a woman who inspired her – essentially body-shaming someone who still happens to be a teenager – is disheartening. There are few words to describe how ungenerous it is, but there are, of course, memes.

Eilish, for her part, remains seemingly unfazed (to the surprise of literally no one – in fact, the internet has already responded on her behalf, by simply posting photos of Eilish and the six Grammys she won in 2019, laughing).

She posted to her Instagram today, sharing a video from TikTok in which a young woman explains: “Y’all gotta start normalizing real bodies OK? Not everybody has a wagon behind them. Guts are normal, they’re normal! Boobs sag, especially after breast feeding. Instagram isn’t real.”