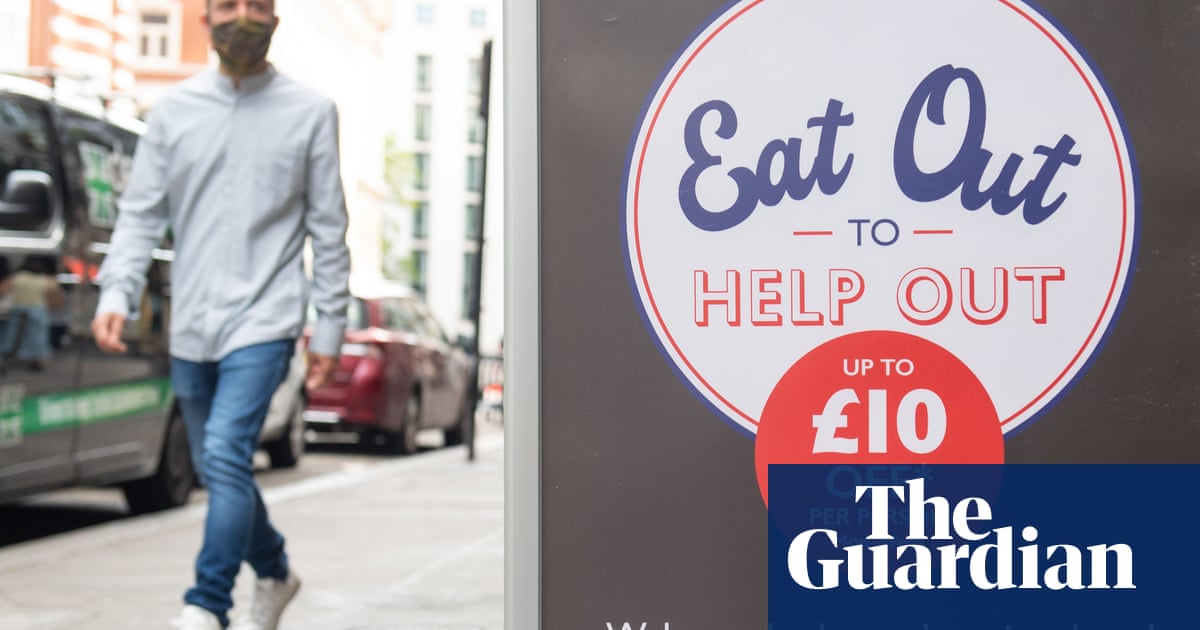 The government’s £500m subsidy for restaurant and pub meals failed to improve the finances of the UK’s hospitality and catering industries in the third quarter, according to a business survey.

The British Chambers of Commerce said 66% of respondents in hospitality and catering reported a fall in sales and bookings between June and the end of September.

Citing responses to its quarterly economic survey, which questioned 6,410 companies employing 580,000 staff, the BCC said the drop in revenue experienced by two-thirds of hospitality and catering firms was far greater than the average decline across all sectors of 46%.

A BCC spokesman said the “eat out to help out” scheme, which ran throughout August and offered discounts on meals in pubs, restaurants and cafes, had a “fairly marginal” impact on the sector as a whole.

Without clarity and leadership, there’s plenty to fear for the UK economy | Larry Elliott

Almost a third of companies in the survey expected their turnover to fall over the next year, revealing that a significant minority believe recovery will take until 2022.

Business surveys have tended to paint a gloomier picture than other measures of business activity, according to some economists. The chief economist of the Bank of England, Andy Haldane, has consistently argued that the recovery has been stronger than expected and overall activity will be only marginally short of its pre-pandemic level by the end of the year.

Suren Thiru, the BCC’s head of economics, said there had been an improvement from the dramatic fall in activity of the previous three months in the third quarter, but dismissed suggestions of a swift V-shaped recovery.

A better performance by the manufacturing sector helped boost the all-sector average, but an increase in the balance of companies reporting improved domestic sales to -15% from -59% was not enough to generate a strong recovery, he said.

Thiru also said the chancellor’s winter economic plan announced last week was likely to provide only a short-term boost while local Covid-19 restrictions on businesses and households remained in place, and that third-quarter gains could fade in the run-up to Christmas.

“The persistent weakness in cashflow is concerning as it leaves firms more vulnerable to external shocks, including further restrictions,” he said.

In the third quarter, 21% of firms reported an improvement in cashflow, 34% no change and 45% a deterioration. Businesses also remained reluctant to invest in new plant, machinery and office space while local lockdowns continued to threaten incomes.

The BCC said 37% reported a decrease in investment in plant, while 46% expected to maintain investment plans that had slumped to historic lows since the pandemic hit. Just 17% of companies plan to invest, up slightly from 9% in the second quarter.

The BCC director general, Adam Marshall, said most of the survey fieldwork took place before the prime minister said a “second spike” of coronavirus had hit the UK on 18 September. “Our findings clearly demonstrate that business conditions remain fragile in the face of uncertainty, with the prospect of a difficult winter to come.

“The economy will need more support, over and above the chancellor’s welcome recent efforts. Ministers must stand ready to provide that support, and to strengthen measures to underpin business cashflow and jobs.”