The family of a Hong Kong activist detained in China after allegedly attempting to flee to Taiwan by speedboat say they have had no communication from him and are relying on a piece of paper from Chinese authorities as confirmation of his whereabouts.

Andy Li was among 12 people caught by Chinese coastguards on 23 August. He had been arrested earlier that month under Hong Kong’s newly introduced national security law, after which the authorities had confiscated his passport before releasing him on bail.

Andy’s younger sister, who did not want to publish her first name, told the Guardian they had no idea he had planned to leave Hong Kong – a venture reportedly months in the planning for at least some of the passengers – and only learned of his arrest from the media. They have been told little since.

“The only time we could be really sure [it was him] was when we received a notice from the police that he was being detained in the Yantian detention centre,” said Li. “There are no photos, we have received no proof. The only confirmation we had was a piece of paper with his name.”

“It’s a black hole, we don’t know anything about it … It feels like they’re trying really hard to not let anyone to the place.”

Mainland lawyers, including several who specialise in human rights cases, have accused the authorities of pressuring them to stop representing their clients. Chinese authorities claimed the detainees had chosen mainland lawyers from a list of government recommendations, but, Li said: “None of them would be stupid enough to pick from the lawyers recommended by the Chinese government. They wouldn’t act in their best interests”.

Liang Xiaojung, a mainland lawyer attempting to represent Andy, said he had submitted materials at the gate of the detention centre, but was turned away and told his client already had lawyers.

“But he didn’t tell us who they are,” Liang told the Guardian.

“To some extent, these [government-appointed] lawyers cannot effectively defend them and provide effective protection of their rights, because these lawyers in a way need to stand in line with the police. This situation is a violation of the rights of the detainee and the defendant.”

Asked why he took the case, Liang said the Hong Kong people were defending their rights. “Avoiding illegal persecution does not constitute a crime.”

The group – dubbed the Hong Kong 12 – have become the latest flashpoint for protesters. The well-known activist Joshua Wong pivots every interview to talk about them instead of himself. A number of actions planned for National Day on Thursday are focused around calling for their freedom and police appear primed for a rapid crackdown. 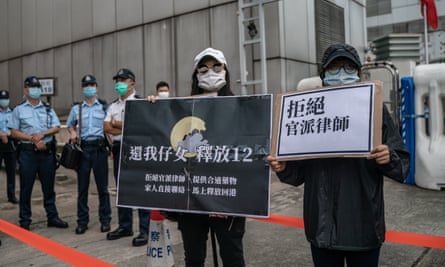 On Wednesday, the families petitioned Beijing’s liaison office calling for their release, or at least for access to a lawyer and medicines. They said that of the families’ appointed lawyers, 10 have been denied physical access to their clients, 13 have been pressured by the government and six have withdrawn. They stood outside the building, separated by two layers of barricades. No one came out to meet them.

Mainland authorities have so far only flagged charges for illegally crossing a border, but there are fears of more serious charges after the Chinese foreign ministry labelled the detainees “separatists”, a serious accusation in China, where the notoriously murky justice system has a conviction rate of about 99%.

Because of Andy’s activism, Li fears he is in the most danger. All 12 of the passengers are reportedly facing charges in Hong Kong related to last year’s pro-democracy protests, but Andy is the only one who has been arrested under the draconian national security law, suspected of foreign collusion.

The siblings were close friends growing up, until Andy moved out away, Li says. At home, the family never talked about politics, and were almost politically apathetic, even when the mass protests kicked off last year. But both she and Andy separately found their way to the pro-democracy movement. Andy volunteered with Fight For Freedom, Stand With Hong Kong, which advocated internationally, and chaired a volunteer election monitoring organisation for the November 2019 district council vote.

“It’s incredible how far he has gone,” said his sister. “To me, he wasn’t this kind of person before. He was a programmer, which doesn’t feel like a very public-speaking person. I admire him for that, getting out of his comfort zone and doing something he thinks is right.”

The Hong Kong government, led by the chief executive, Carrie Lam, has effectively walked away from assisting the Hongkongers, saying they should face their alleged crimes in the mainland’s jurisdiction before being brought home to answer the Hong Kong charges.

“They’re supposed to work for the Hong Kong people but since last year they don’t seem to report to the people, they report to the central government,” said Li. “This is what pushes us on to the street.”

Andy’s parents and sister are not talking much about the arrest at home. “We try to get on with life, but there’s something unspoken that creeps into your heart and you know something isn’t right,” Li said.

“But when I mention it, we’ll say that even if we don’t share political views, family is family, and we want our son back. On this issue we have the same goal. We’re all just hoping for the best.”