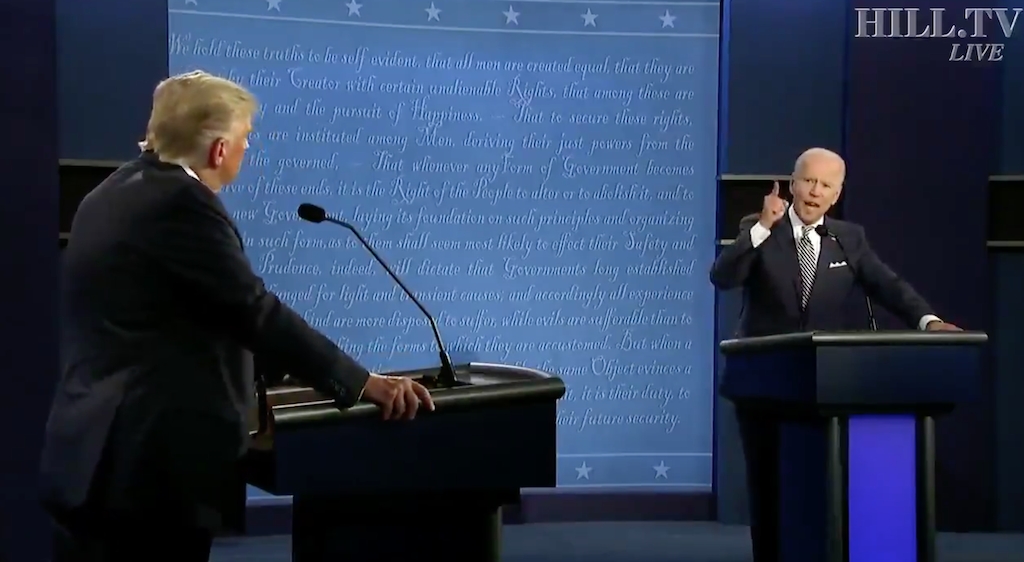 The first presidential debate was almost certainly the nastiest in history, starting off quiet but quickly descending into fighting and interjections, mostly from the incumbent, Donald Trump. Some of the jabs between the two were amusing; a flustered Biden at one point called him “man” and twice he called him a “clown.” But most of the time watching the debate was a profoundly annoying and noisy experience, with Trump barely letting Biden get five words in before interrupting him with jabs and insults.

But there was one interruption that was more horrifying than most, one that showed how heartless the sitting president can be. Biden was talking about our divided nation when he segued into a discussion on something close to his heart: the military. Both of Biden’s sons served at different points, including his late son Beau, whose unit was deployed overseas during the Iraq War. Trump has said many derogatory things, both on and off the record, about the military, in which he never served, infamously having repeatedly avoided service during the Vietnam War. Here’s where Biden went on the attack.

It’s around here that Trump started interrupting Biden’s talk about his late son and the troops, trying to bluster in with one of his attempted gotchas. “Really?” Trump said in defance. “Are you talking about Hunter?” Joe Biden: “I’m talking about my son Beau Biden!” President Trump: “I don’t know Beau. I know Hunter. Hunter got thrown out of the military. He was thrown out, dishonorably discharged.”

It’s true: Hunter Biden was discharged, though not dishonorably, and while battling a cocaine addiction. But ignoring that Trumpian embellishment, people online were disgusted that Trump would interrupt Biden talking about his late son by trying to falsely smear his other son.

Interrupting Vice President Biden’s comments about his son Beau to pivot to lies about Hunter Biden should alone totally disqualify Donald. What a disgrace. What a traitor.

I thought I was inured to Trump’s awfulness, but I am so appalled by Trump responding to Biden talking about his son Beau by attacking Hunter that I am literally shaking with anger.

Jesus Christ. Trump going after Hunter Biden for his drug problem, interrupting Biden has he talks about Beau is… not how you appeal to the suburban female voters Trump needs. Enormously ugly moment that made me feel sick, and I bet I’m not alone. #Debates2020

Saying I “I don’t know Beau” and the immediate pivot to condemning Hunter’s character after Biden’s emotional plea is…dehumanizing.

It caused people to reflect on their own lives.

“My son had a drug problem but he’s overcome it and I’m proud of him” — Biden says of Hunter, a powerful message for many Americans hit hard by the opioid crisis Trump pledged to end in 2016.

[Also, Hunter was not dishonorably discharged.]

My youngest brother Matthew died earlier this year because of addiction and mental illness. My family is not alone. And millions of us empathize with Joe Biden. I don’t think the attacks on Hunter is going to land the way he thinks it will. https://t.co/6OcdVixsa6

The prick in the White House just brought up cocaine use on Hunter. Someone should send him video of Don Jr from last week.

Even if Trump hadn’t acted inhumanely, he was still wrong.

Hunter Biden has explicitly acknowledged that his Biden name got him opportunities. But Trump’s portrayal of him as endlessly unemployed without Burisma or without Joe as VP is wrong.