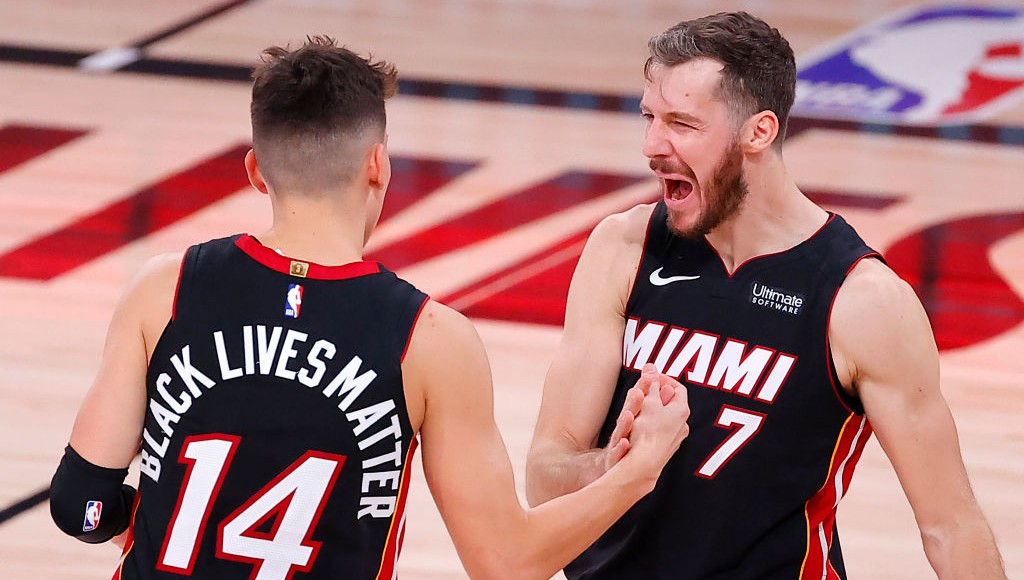 The Miami Heat have had an incredible run thus far to the NBA Finals, taking out the top-seeded Milwaukee Bucks in five games and the third-seeded Boston Celtics in six to advance to their first Finals since their Big Three disbanded in 2014. Poetically, they get to go up against the man who left in LeBron James.

The Lakers are heavy favorites to win the series, but then again, Miami has been an underdog in their last two series and came out on top. To do so against the Lakers would require their best performance yet, something they’re well aware of as Jimmy Butler noted they’ll have to be “perfect” to beat LeBron and company. To accomplish that, there are three keys to this series that can help swing the series in favor of the Heat.

1. Goran Dragic has to continue to be stellar

The Heat have gotten tremendous play from Dragic, Jimmy Butler, and Bam Adebayo in the playoffs thus far, which has to continue in the Finals, but of those three the one that figures to have the most favorable matchup is Dragic. The Lakers have gotten quality play out of Rajon Rondo and Alex Caruso at the point guard spot this postseason, but neither have played to the level of Dragic. The Heat point guard has been sensational, averaging 20.9 points, 4.7 assists, and 4.2 rebounds per game on a 45.2/36.3/81.4 shooting split and has outplayed his point guard opposition — Malcolm Brogdon, Eric Bledsoe, and Kemba Walker — in each series thus far.

In this series, he should pretty easily be able to win that matchup again, but the Heat will need him to be more than good. Caruso has proven to be an excellent on-ball defender who applies strong ball pressure, and while Rondo isn’t the defender he once was, he’s come up with some big steals late in games thanks to his aggressiveness and savvy. Dragic has been terrific at protecting the ball with just 2.5 turnovers per game, but he’ll encounter much more on-ball pressure in this series. The Lakers halfcourt offense is something you can slow down, but they are nigh impossible to handle in transition, and it’ll be incumbent on Dragic in particular to be smart with the basketball and not create fast break opportunities for the Lakers. He’s been, at times, Miami’s best player in this postseason, and if he can continue playing at that level against L.A., it will be the best positional matchup advantage the Heat have on the floor.

2. How effective will the Heat’s zone defense be?

Against Boston, Miami played an unbelievable amount of zone to great effect, particularly early in the series. While the Celtics would eventually figure some things out against the zone, it played into Miami’s strengths in terms of jumping passing lanes and having a number of players with great hands to force turnovers and get out in transition. No one hunts mismatches like LeBron James, and as such, I’d expect Miami to go to the zone a decent amount to try and keep him off balance and make L.A. execute some zone offense that might take the ball out of James’ hands more.

That said, the Lakers have spent the past few days watching Miami tape and have surely been devising a zone offense knowing they’re going to at least try that out early. The Heat love the zone especially when they have their best offensive lineups on the floor — those with Dragic and at least one of Duncan Robinson and Tyler Herro — because it takes away the opportunity to try and get them in one-on-one situations. If Miami’s zone can slow down the Lakers and force them into jump shots, that’s a huge win for Miami and they’ll continue going to it throughout the series. If the Lakers are able to break them down by getting the ball into the middle of the zone with Anthony Davis — as Boston started to do with Daniel Theis — and their others are able to cut off the ball and create good looks at the rim that way, the Heat may have to deviate from the zone plan and play more man, which seems to be a big advantage for the Lakers.

3. Make this the series the Heat get hot from deep

The Heat were the second best three-point shooting team in the regular season, hitting 37.9 percent of their attempts from deep. In the playoffs, that’s dipped to 35.7 percent, which is just two-tenths of a percentage point higher than the Lakers (35.5 percent). As the underdog, they simply have to get hot from three, which they are more than capable of but haven’t yet done in the playoffs. Their biggest volume shooters have all shot the ball worse in the postseason than they did in the regular season, even if guys like Robinson (40 percent) and Herro (37.8 percent) are still shooting it well. Jae Crowder, who was a 44.5 percent shooter in his 20 regular season games in Miami, has fallen off a cliff, back to being a 34.4 percent shooter in the playoffs, while Kelly Olynyk, who hit 40 percent in the regular season, has likewise dropped off to a 31 percent clip in limited minutes this postseason.

In this series, they simply need their role guys to hit shots. While that’s something that every team benefits from, for Miami, it’s going to be critical if they’re to get past this Lakers defense that does such a good job of walling off the rim. There are open looks to be had for your secondary options, but they have to hit them. It’s something Denver and Houston’s shooters couldn’t do consistently enough, particularly in key situations, but Miami’s shooters are, when cooking, better. That Miami’s made it this far with pedestrian shooting is a testament to their what they’ve been able to do getting to the rim, but now is the time to get hot to really apply some pressure to the Lakers.