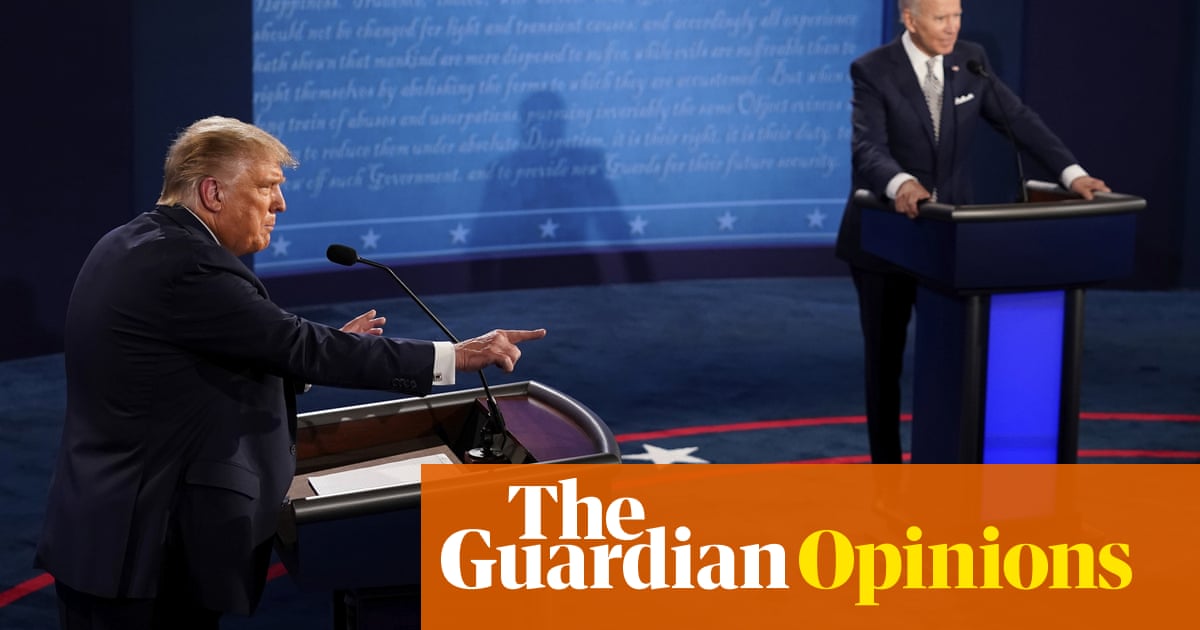 Ever since the pioneering Kennedy-Nixon encounter in 1960, the questions that political journalists pose after US presidential debates have been the same. Who performed best? Who had the better of this or that part of the argument? Who exceeded expectations or fell short? Who had the best lines and delivered the best zinger? And has any of it changed the election odds?

How the death of Ruth Bader Ginsburg could change America

They are still being asked after the first televised match-up between Donald Trump and Joe Biden. With five weeks to go before the US votes, the questions still matter. But after Tuesday’s verbal roughhouse they also feel crowded out by other uncertainties that seem more epochal, more dystopian and more pressing, not least when seen from this side of the Atlantic.

It can seem overblown, but it now makes sense to ask if America is on the edge of becoming ungovernable, or if the rule of impartial law enforcement still commands respect. It is also possible, in ways that were not true in the past, to consider whether the US can be relied on internationally, and whether it is realistic to continue to regard it as an ally. But if it is not an ally, what follows from that? The answers are increasingly uncomfortable.

Perhaps most potently, it has to be asked whether America, with all its fabulous energy, wealth, liberty and ambition, still offers the inspirational model to the world that it did to so many, for so long. Or instead is today’s America, defined increasingly by its inequalities, violence, fundamentalism and racism, becoming a model to be rejected, to be guarded against and even, in some cases, to be resisted?

Sober answers to these questions matter to the whole planet, above all because of climate change and amid the coronavirus pandemic. But they matter to Britain in very particular ways too. The UK’s claim to a special relationship with the United States has been the cornerstone of its view of itself in the world ever since 1945. A deference to, and infatuation with, America also runs deep in our culture. But if the US is changing in an increasingly dangerous fashion, where does that leave that foreign policy or that infatuation?

Britain has a lot riding on getting the answer right. Coming at precisely the time when the UK is casting off its alliance with its own continent, the issue has special urgency. Back in 2016, when Britain voted to leave the European Union, the allure of the exit for many leavers rested partly on the apparent dependability of the transatlantic alliance. But that was pre-Trump. America is a different place and becoming more so. Even leavers should sometimes ask what exactly this wheel of fire is on to which they are binding themselves.

Fundamentally, the credibility of any alliance, whether with Europe, the US or anyone else, rests on material self-interest over things such as trade and security. But these material issues are also oiled by common values and trust, without which the relationship remains brittle and pragmatic. The bigger ally will always call the shots. And Britain is not the bigger ally.

Few of these values matter as much as respect for the rule of law. It is not difficult to list ways in which this has been undermined by Trump’s America. The list would include everything from the president’s tax returns to breaches of international treaties. The danger for Britain is that, in defence of its unequal alliance, it is beginning to follow the US down the same route of playing fast and loose with the law for political reasons.

Take one hugely significant example. Trump and the Republican senate leadership are trying to install the conservative judge Amy Coney Barrett in place of the liberal Ruth Bader Ginsburg in the US supreme court before the presidential election on 3 November. This is a wholly political act. But it is not new. It is merely a particularly shameless step in a long history of politically shaped justice in the US.

In the long term, the Barrett nomination is aimed at creating a conservative 6-3 majority in the court, which may then start to undo abortion and other civil rights. But the overriding and immediate purpose is to construct a court that may rule on the result of the November election itself. If that were to happen, and if the court awarded the disputed election to Trump, the politicisation of American justice would be complete.

In Britain, judges are still selected on the basis of their legal qualifications, not their politics. Even if you know the identity of the current UK supreme court president, which most people will not, it is a fair bet that you don’t know whether Lord Reed can be classified as a liberal jurist or a conservative one. We are better off as a country for that. Judges should neither be cult figures, as Ginsburg became for some American liberals; or hate figures, as she was for conservatives.

Seen against the backdrop of a divided America facing the Barrett nomination, Britain’s institutions may still seem gratifyingly independent and resilient. But for how long? The Johnson government’s purge of senior civil servants, and its plan to install conservative ideologues to govern the BBC and the independent regulators, are a declaration of war on pluralism and independence. If the United States continues its slide into culture wars and worse, the task of stopping this from dragging Britain down too will become increasingly urgent.

•Martin Kettle is a Guardian columnist