Sunil Gupta can remember the names the white schoolkids called each other when he arrivsunisunil l guptaed in Montreal in the late 1960s, having moved there from Delhi. “There were Greeks and Italians,” he says over a cup of tea in his loft-like apartment and workspace in London. “People used very pejorative terms freely. I learned the whole vocabulary.” His fellow pupils, however, did not yet have the words to describe Gupta. “They had never heard of India. My ‘baggage’ was useless.”

He also recalls his first boyfriend. “This American boy: blond hair, blue-eyed, Irish, from Wisconsin.” He didn’t know much about Indians, says Gupta, “but he was very knowledgeable about the streets.” Again, Gupta hadn’t the terminology for what they did together. “I’d been very sexually active since as far back as I can remember,” he explains. “In large Indian families, there is a very strict formality on the surface, but underneath everything goes. There were boys in the neighbourhood, but it didn’t have a name. Besides, my future was laid out: at the right age, your mum and dad found you a spouse.”

That didn’t happen, and his five-decade career – the subject of From Here to Eternity, a new retrospective at the Photographers’ Gallery in London – sheds light on where he’s from and who he became, while partially telling the story of gay liberation, from the bars of Christopher Street, Manhattan’s gay mecca, to the newly empowered young professionals in south-east Asia. 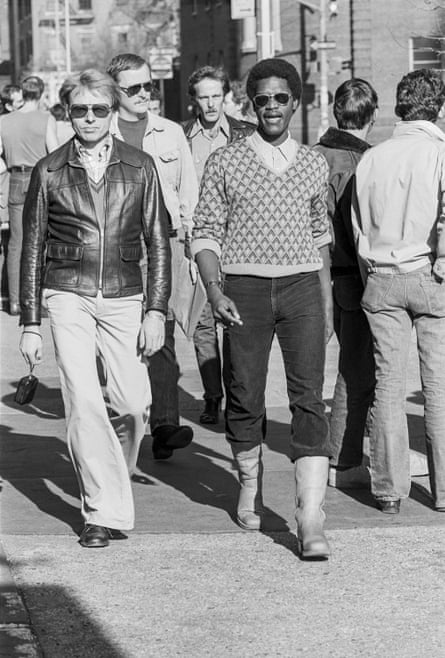 On the march … Untitled #22, 1976, from the series Christopher Street. Photograph: Sunil Gupta

Indeed, Gupta has a Zelig-like quality when it comes to the story of gay rights, arriving in New York only a few years after the Stonewall riots; shooting in London during the grim days of the Aids pandemic and Clause 28; and capturing the more recent struggles in 21st-century India.

His photography takes in a surprisingly wide range of styles, from family snaps to accomplished, 35mm black-and-white street reportage, as well as far more complicated collage and text-and-image projects. His artistic progression began in Canada, where he studied as an undergraduate, came out, began shooting for the local press and campaigned for gay liberation.

“We would write little pamphlets about how cruising was very capitalist,” he explains, “as it breaks up friendships and communities.” He also came to believe that homosexuality might have the power to destroy family based capitalism through promiscuity. “Family thrives on property,” he says, “and reproduction and property go hand-in-hand.”

Those views stayed with him when he moved to New York in the 1970s. He followed his boyfriend (who, ironically, worked in finance), and after trying to please his parents by studying for an MBA, enrolled at the New School to take classes with Lisette Model, the photographer who had taught Diane Arbus. 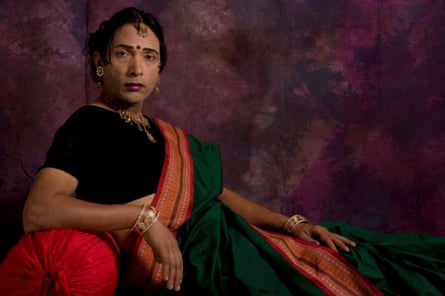 Arbus and her contemporaries Lee Friedlander and Garry Winogrand had been shown together at the Museum of Modern Art (MoMA) in 1967, in an exhibition called New Documents. They were Gupta’s heroes. “I was obsessed,” he says. “Their impact was massive. Everything was subject matter.”

He trained his camera on the city’s gay scene, shooting on Christopher Street. Other parts of the NYC scene were not entirely to his tastes. “There were increasingly heavy-duty bars going down the West Side highway. Eventually the bars closed and there were just trucks.”

Trucks? “Yes. Trucks. You had sex in them. There was no light – and I’m a bit too timid for that. People got murdered there. Suburban boys with baseball bats would arrive on weekends. They’d heard you could go down there and ‘beat up a fag’. As a consequence of that, there were gay vigilante groups waiting for the boys.”

Relocating to London in late 1977 – again, following his partner – brought new shocks. “I discovered racism,” he says. “I got off the plane and I discovered ‘Paki-bashing’. They mean people like me.” Gupta became involved with radical, post-colonial politics, and supplemented his income by working as a jobbing news photographer. 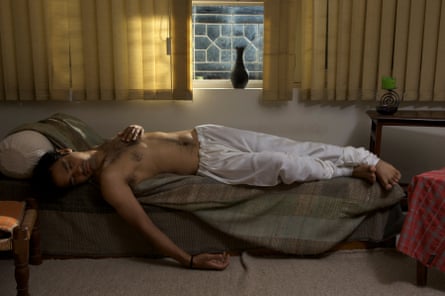 His first commission was to cover Miss UK. “I did documentary work for women’s magazines,” he recalls. “I shot for The Field, photographing lords in their manor houses. The only thing I really didn’t like was angling magazines. I had to sit by a lake with a guy for six hours and nothing happened.” He also photographed for the Times until the Wapping strikes, when he refused to cross a picket line. “Some crossed, some didn’t,” he says. “Those who didn’t never got those jobs again.”

Gupta split from his boyfriend around at this point and, in an attempt to account for the breakup, he produced Lovers: Ten Years On, tender portraits of gay couples, most of whom formed part of his London social circle. “I made it partly to meet a bunch of gay couples,” he explains. “I was trying to find out if there was something I didn’t realise, something that I didn’t do.”

The images weren’t well received. “All the curators back then were women,” he says, “and, to generalise hugely, they all went to the same girls’ school and to the Courtauld [Institute of Art]. Gay men just weren’t within their world view. They did not know who was going to want to see this.” 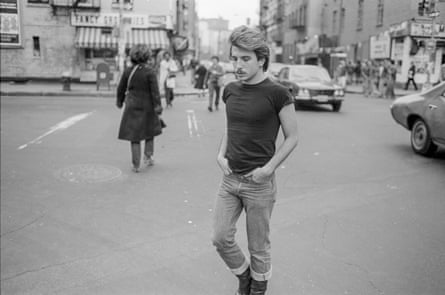 He persevered, recognising that, in his work “the personal and the political and the social were getting more and more blurred”. Gupta returned to India to photograph gay men in his home city of Delhi, for a series called Exiles. Back then, in the 1980s, being gay in India “was unmentionable in polite company – there was no mention in the media”. Even those who identified as queer were, in Gupta’s view, a little closeted. “They would say they were gay, but they were not gay,” he says. “They would get married, have a BMW – and have some boys on the side. They would say, ‘Oh, I don’t want to be a martyr.’ There was something so wimpy about it.”

In 1995, Gupta was diagnosed as HIV positive. Four years later, he produced a bleak, blurred series of diptychs, also called From Here to Eternity, juxtaposing images of himself undergoing various therapies with the facades of gay sex clubs, shot during the day, when the entryways were shuttered. “Was I being locked in or locked out?” he wondered.

Gupta now has the disease under control. He was able to return to India, where an economic boom was emboldening a new generation. “India went from a planned economy into a more liberal one in the early 1990s. In the mid-2000s, kids were graduating into a sea of jobs. There were loads of consumerist offerings. Everyone had a mobile phone.”

The photographer expressed this in a series of lush, stylised tableaux of today’s gay Indians called The New Pre-Raphaelites. Like the 19th-century brotherhood, this new cohort “was very impatiently wanting to express themselves. They were feeling very restrained by the moral codes of their society.” 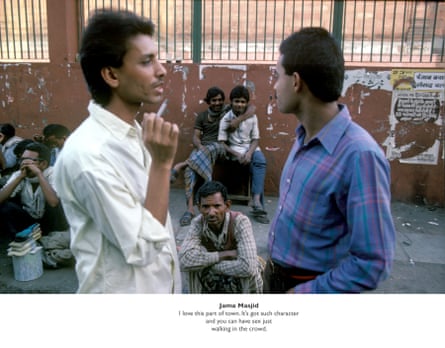 This urgency was justified: the old colonial law banning homosexuality in India was only overturned in 2018. Yet there’s another, playful side to the pictures. These young lovers, just like the Pre-Raphs, “could be seen as dilettantes. They’re privileged kids.”

Gupta believes progress for gay rights often follows the money. “I think that’s why gay liberation began in New York and extended to London, because that’s where the money was. You need money to break away. It’s an urban, western idea and it’s been exported.”

This near-Marxist outlook may explain why Gupta hasn’t been lauded by the gallery system. He says the commercial art world’s disinterest was “kind of mutual – I wasn’t interested in them to begin with”. Besides, he had longer-term goals. “I set out to make my story part of the art historical context, because I couldn’t find anything there that resembles it. Now Exiles is in MoMA and other images are in the Tate, it feels like it’s done. Now the multiplicities of my life have been magnified and are permeating out.”

For example, “Pretended” Family Relationships, his 1988 photo-collage work critiquing Clause 28, featured in the Barbican’s summer 2020 exhibition, Masculinities, alongside a few of his Christopher Street photos from the 1970s. The latter also inspired Helmut Lang’s autumn/winter 2020 collection. Gupta was asked to shoot the campaign images for the brand on Christopher St. After years of obscurity, this new-found appreciation is clearly welcome.

“The art world has come over the horizon,” he says, “and is trying to find the things it thinks were left behind.” Is he among them? “I think so.”

• From Here to Eternity: Sunil Gupta – A Retrospective is at the Photographers’ Gallery, London, 9 October until 24 January 2021.