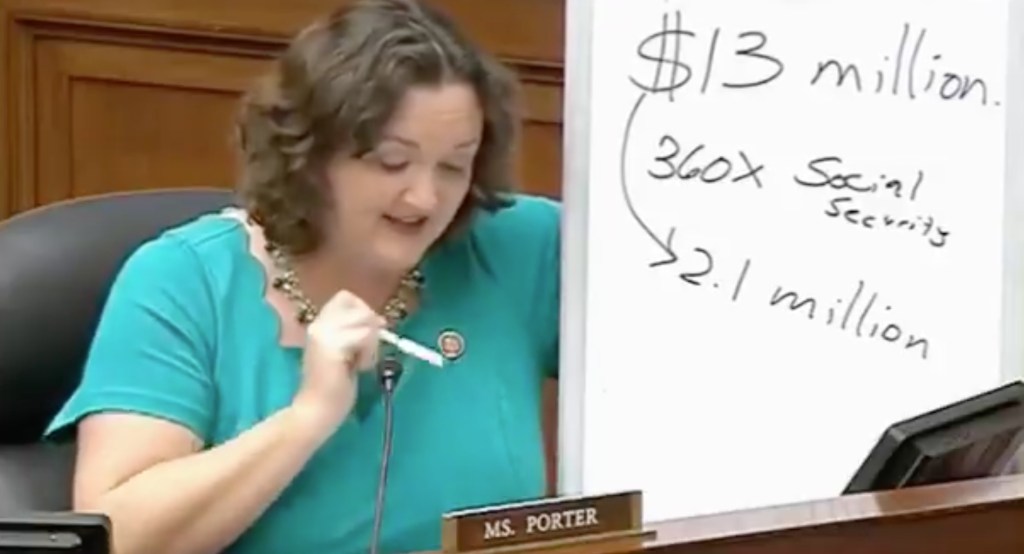 Look, watching politicians peacock their way across our TV sparks joy in no one right now — unless that politician is Katie Porter and she’s got a whiteboard in her hand.

The U.S. Representative and tenured law professor has gained a bit of a fandom for her use of props you’d be more to likely find in one of her classrooms. She sent the CDC Director home with his tail between his legs earlier this year (and scored a promise of free COVID-19 tests) when she whipped out her dry erase secret weapon, and she completely decimated USPS Postmaster Louis DeJoy over the price of a postage stamp. So you’d think Mark J. Allies, the CEO of a pharmaceutical company called Celgene, would’ve been a bit more prepared when he Zoomed into a House Oversight Committee meeting to defend his latest multimillion-dollar paycheck.

Porter began her questioning by writing a fairly innocuous number on her trusty whiteboard — 13 million. She then proceeded to drag Allies for taking home over $2 million in bonuses after the company decided to raise the price of a cancer treatment drug called Revlimid. And in case watching this guy stumble over his explanations for why he was taking home millions when so many people struggle to now afford that life-saving treatment just wasn’t entertaining enough, she broke that number down further, showing that Allies got half a million dollars just from tripling the price of that drug.

That’s called price gouging, folks, and the honorable Katie Porter is not having it — though Twitter seems to be pretty pleased watching her make Big Pharma’s insides shrivel up and die.

I know the Katie Porter bus is pretty crowded, but damn it I’ll stand if there is no place to sit. She is the Michael Jordan of dunking on CEOs and I am here for every second of it!

Katie is that school teacher who made sure you understood the hard math, by talking it out with you at the board.