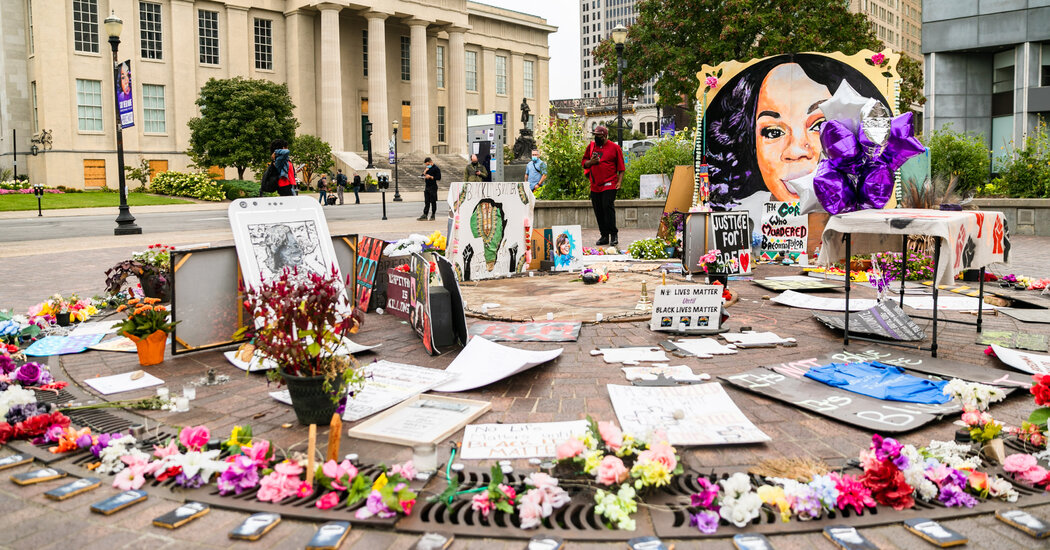 LOUISVILLE, Ky. — A judge on Wednesday allowed the Kentucky attorney general to delay the release of an audio recording from the secret grand jury deliberations in which jurors decided not to charge the two Louisville police officers who shot and killed Breonna Taylor.

The rare release of the tape could shed light on the evidence, witnesses and possible charges that prosecutors presented to the grand jurors, who ultimately decided to charge a former police detective with recklessly endangering three of Ms. Taylor’s neighbors during a botched raid on her apartment in March.

The judge said the recording must be released by noon on Friday, according to the attorney general, Daniel Cameron, who had asked for a one-week delay to redact parts of the recording to protect witnesses and other people named in the proceedings.

Elizabeth Kuhn, a spokeswoman for Mr. Cameron, said in a statement that prosecutors needed extra time to redact information like phone numbers and addresses. The audio recording of the proceedings is more than 20 hours long, she said. Mr. Cameron had agreed to release the tape this week in response to a judge’s order and had planned to release it on Wednesday before asking for the delay.

Earlier this week, one of the unnamed jurors filed a court motion asking for the proceedings to be made public and accusing Mr. Cameron of using the jurors “as a shield to deflect accountability and responsibility” and of planting “more seeds of doubt in the process.” Mr. Cameron has insisted that the grand jurors in the Taylor case were given “all of the evidence, presented all of the information.”

Kevin M. Glogower, a lawyer for the unnamed juror, said Mr. Cameron’s request for a delay was “an appropriate step” to protect personal information about private citizens. He said this week that grand juries typically record opening statements and limited testimony from witnesses, but that much of the deliberations may not be recorded.

The grand jury indicted Brett Hankison, the former detective, on three counts of “wanton endangerment” last week, saying Mr. Hankison had recklessly fired his gun during the raid, when two other officers also fired after Ms. Taylor’s boyfriend shot an officer in the leg. The boyfriend has said he thought the police officers, who were executing a search warrant as part of a drug investigation, were intruders.

At least some of Mr. Hankison’s rounds reached an apartment behind Ms. Taylor’s, where a pregnant woman, her husband and their 5-year-old child were asleep, but no one was harmed by those shots.

The decision last week to not charge either of the two police officers who shot Ms. Taylor, a Black, 26-year-old emergency room technician, ignited another round of emotional protests in Louisville, during which a man shot and wounded two Louisville police officers.

The judge’s decision allowing the extension was not immediately available on the Kentucky courts website. Stew Mathews, a lawyer representing Mr. Hankison, confirmed the attorney general’s description of the order and said he had not opposed the release of the recording.

In theory, grand jurors have broad powers to investigate cases, including the ability to subpoena witnesses, but in practice, prosecutors control the process — determining how much evidence is presented and which charges the jurors should consider — and are rarely challenged. For example, grand juries do not need to limit themselves to the charges presented by a prosecutor, but many may not realize that. Much of what a grand jury understands about its role comes from the prosecutor.

To bring an indictment, grand jurors must find probable cause, a much lower standard than that used to determine guilt or innocence. In Kentucky, nine of a grand jury’s 12 members must vote to bring charges in order for someone to be indicted.

Grand jury proceedings usually remain hidden, but in rare instances records from deliberations have been released. After a grand jury declined to indict Darren Wilson, the police officer who killed Michael Brown in Ferguson, Mo., in 2014, the prosecutor released thousands of pages of transcripts and evidence.

The Kentucky court has not yet ruled on whether the juror who filed the court motion would be allowed to speak publicly, but Mr. Cameron said he had “no concerns” with jurors describing the deliberations.

Will Wright reported from Louisville, Ky., and Nicholas Bogel-Burroughs from New York.