In 2020, artists making political statements have typically done so on the streets, with murals, protest placards or by knocking down old monuments.

But much overlooked is the envelope as a place for art. Since a stamp symbolizes the mail-in vote, it has come to represent a form of resistance, a form of direct action. The New York non-profit TRANS> has created a stamp project called These Times. The project, which will premiere both online and in sticker format, features 50 artists and institutions who stress the urgency of voting.

“The post office is at the helm of democracy,” says the New York-based curator, Sandra Antelo-Suarez. “It’s our civic duty to vote.

“It’s about creating grassroots structures that, along with museums, artists and art galleries, create an economy of response,” she adds.

It all started in March when the pandemic hit. Antelo-Suarez found herself frustrated. “I wanted to create a response, thinking about how culture and the art world could respond.” She began asking artists to participate in a grassroots project, one that would bring art to people’s homes. “I thought: stamps.

“I asked 50 artists in my personal network to make a gesture in an artwork that’s a tribute to our culture, which is being lost.” 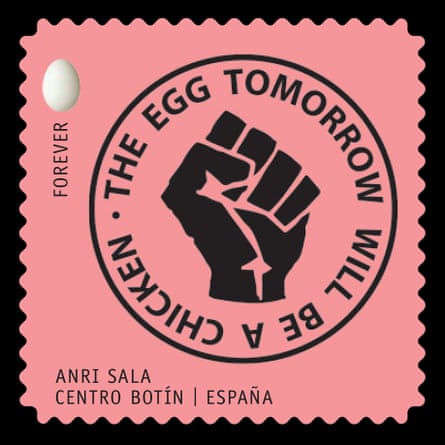 “I told them to imagine their stamp has the power to end injustice in the world. It’s up to the people, not the politicians, to vote, to change the system.”

The printed stamp artworks (which will have no stamp value with the US postal system), will be distributed in the October issue of the monthly Frieze art magazine. 50,000 sticker stamps will be printed in total.

“The art world is so much about money, people forget the simplicity of a stamp,” she adds. “You disseminate them.”

Each stamp will be posted on social media, though at its core, it’s about bringing art directly into people’s homes. The artists featured in the project are based in New York, Spain, Portugal and Ibero-America, Germany and Japan, among others.

“I saw the devastation in New York and across Ibero-America, especially the disproportionate impact the pandemic has had on our culture and artistic communities,” says Antelo-Suarez, “and wanted to find a way to bring artists and thinkers together to create a space for grief, but also for hope and action.”

The stamps are not only a tribute to the lives lost during the Covid-19 pandemic, but also urge Americans to vote.

“I believe culture is a very important platform of initiating change and dialogues,” she says. “How do we become united?”

It all boils down to Americans voting in the upcoming election in November. “Democracy could be taken away, not just from Americans, but from the entire world,” says Antelo-Suarez. “It’s a crucial election, I’ve never seen things so polarized in the US, there are true believers of Trump and those against him. It’s going to have side-effects either way.” 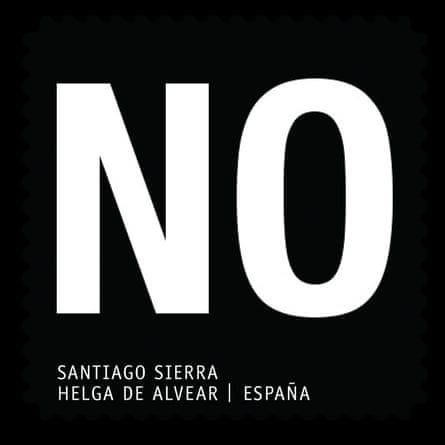 Each stamp features an original artwork alongside the name of the artist, the art institution where they have (or recently had) an exhibition, and the country.

The Spanish artist Santiago Sierra created a stamp spelling out the word NO. It’s taken from his No Global Tour, an ongoing project where he brings a large sculpture that spells out NO to various cities across the globe (next up will be Tel Aviv).

“No is the only vocabulary to use in the face of power,” says Sierra. “These are times of attack on populations, times to draw a line in the sand and say from there you do NOT pass.”

The Argentinian artist Juan Sorrentino’s stamp is based on a photo of a person wearing a hazmat suit with a speaker on their back. It’s based on the artist’s performance piece, Motto, where he amplified the sound of nature.

“I thought that it was a good opportunity in this difficult and heavy historical moment,” says Sorrentino, “like longing for the lost and the importance to take care of the ecosystem we inhabit.”

Alejandra Seeber’s stamp depicts the phrase Futuro (meaning Future) made of kiss-shaped stamps, created in collaboration with her 11-year-old daughter.

“The Latin minority was hit hard by Covid-19, so a word in Spanish seemed appropriate,” says the Argentinian artist. “The current post office conflict allows me to use this stamp as a tool to talk about democracy, voting and the conflict rooted in the ‘American way’ institutions, like the USPS.” 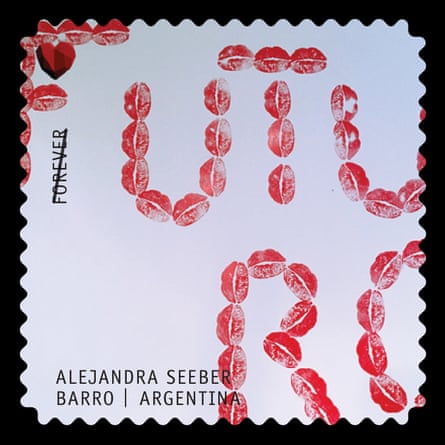 The Guatemalan artist Regina José Galindo created a stamp that reads in Spanish Estamos Vivos, which means We Are Alive. It’s a reference to the 1969 telegrams of the Japanese artist On Kawara who wrote: “I am still alive.”

“I adapt it to our current moment,” says the artist. “It’s the election year amid thousands of deaths caused by the pandemic. Many of those dead are people of Latin American origin.”

Mateo López, a Colombian artist, created a stamp that depicts a red shape that calls to mind a heart.

“I just thought of designing a logo, something visually strong,” he says. “Like a text message saying, ‘I care,’ ‘I love you’ or ‘thinking of you.’ That feeling came out and I titled this piece ‘Say it,’ or ‘Dilo’ in Spanish.”

The Albanian artist Anri Sala’s stamp depicts a clenched resistance fist, bearing the phrase: “The egg tomorrow will be a chicken.”

“I grew up in a society, where having the right to choose and cast a vote were not ‘given’ until relatively recently,” says Sala. “I’m acutely aware that when we cast our votes, we both take a stake in our future and honor past struggles we owe our freedom to.

“I believe that voting in the 2020 US elections is key to upholding the arrow of time and its unequivocal one-way direction, against the turning back of the clock.”