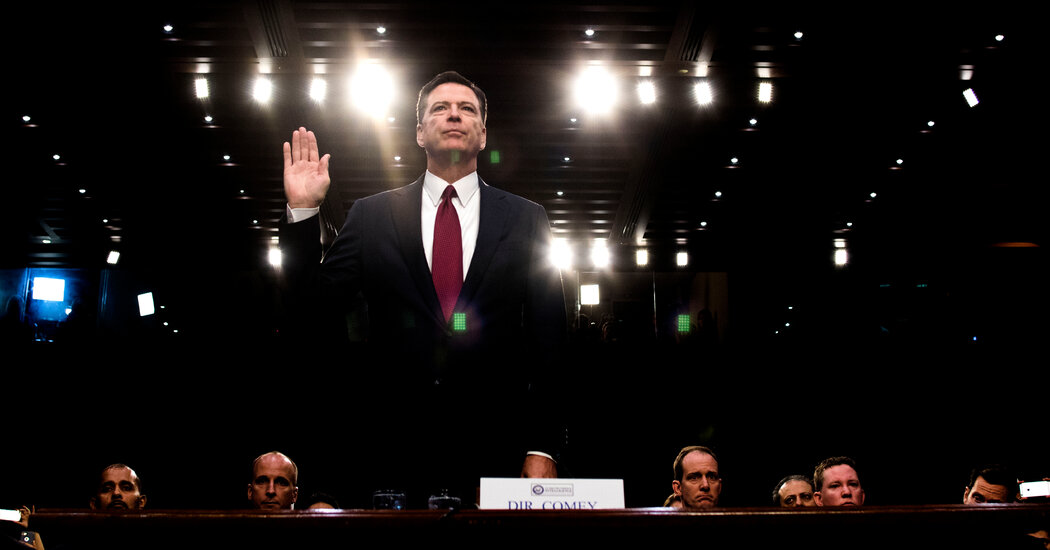 WASHINGTON — The former F.B.I. director James B. Comey will testify on Wednesday before a Republican-led Senate committee seeking to discredit the investigation he opened during the 2016 election into ties between Donald J. Trump’s campaign and Russia.

With another presidential election looming, Republicans on the Senate Judiciary Committee are eager to portray President Trump as a victim of a politically motivated smear by the F.B.I. that unfairly cast a shadow over his presidency. And they will contend that Mr. Comey was the ringleader.

Mr. Comey is expected to strongly defend the F.B.I.’s handling of the investigation, including his decision to open it. But he will most likely acknowledge that his initial claims were wrong that a wiretap of a former Trump campaign adviser, Carter Page, was properly handled and concede that the bureau had been sloppy on that aspect of the broader inquiry.

He will testify by video from his home. Here is what to expect.

Mr. Comey is the centerpiece of a monthslong attempt by conservatives to rewrite the Trump-Russia narrative.

Led by Senator Lindsey Graham of South Carolina, the Judiciary Committee has been pounding away for months at the F.B.I.’s investigation of ties between Russian election interference and the Trump campaign.

The panel’s work has built on an investigation by the Justice Department’s independent inspector general, Michael E. Horowitz, that found evidence of negligence and errors in one narrow aspect of the investigation: the F.B.I.’s applications to wiretap Mr. Page. But where the inspector general concluded there was no evidence of illegal activity or a politically motivated plot by senior department officials, Mr. Graham insists there may have been.

Mr. Comey signed off on some of the warrant applications and, as director, was the top bureau official responsible for the investigation until he was fired by Mr. Trump in the spring of 2017.

“The day of reckoning is upon us when it comes to Crossfire Hurricane,” Mr. Graham said in advance of the hearing, using the F.B.I. code name given to the investigation.

Working with Mr. Trump’s Justice Department, Mr. Graham has released investigative records raising doubts about the integrity of the agents running the case and information upon which they relied, though Democrats have said they lack context and are misleading. The president, in turn, has eagerly taken the disclosures as ammunition in a long-running campaign to reshape the public’s understanding of the inquiry, which concluded the Trump campaign willingly accepted help from the Russians and that Mr. Trump sought to foil the investigation.

The committee has already publicly questioned two former deputy attorneys general, Rod J. Rosenstein and Sally Yates, who oversaw aspects of Crossfire Hurricane and signed off on the applications for the secret wiretap warrants targeting Mr. Page. Both expressed regret for errors identified by Mr. Horowitz but dismissed assertions by Republicans on the panel that their actions were politically motivated or that Mr. Trump’s campaign need not have been investigated.

Democrats have opposed Mr. Graham at every turn, accusing him of abusing his Senate powers to help Mr. Trump and take attention from the continuing Russian threat.

Mr. Comey has not testified before Congress since Mr. Horowitz’s report was released in December. He has remained steadfast in his decision to open the investigation, arguing that the F.B.I. had sufficient reason to scrutinize the ties between the Trump campaign and Russia.

Mr. Trump and his allies, Mr. Comey has contended, have smeared him and the F.B.I. in an effort to distract from the campaign’s ties to Russia.

“The F.B.I. was accused of treason, of illegal spying, of tapping Mr. Trump’s wires illegally, of opening an investigation without justification of being a criminal conspiracy to unseat — defeat and then unseat — a president,” Mr. Comey said in December on “Fox News Sunday” after the release of Mr. Horowitz’s report. “All of that was nonsense. I think it’s really important that the inspector general looked at that and that the American people, your viewers and all viewers, understand that’s true.”

Mr. Comey described the problems with the wiretap as “real sloppiness.”

“But remember how we got here. The F.B.I. was accused of criminal misconduct,” Mr. Comey said. “Remember, I was going to jail, and lots of other people were going to jail. People on this network said it over, and over, and over again.”

Even in the best of times, Democrats and Republicans on the Judiciary Committee squabble. But after the recent death of Justice Ruth Bader Ginsburg, the committee is now on the front lines of a war over filling her seat on the Supreme Court.

Republicans are pressing ahead to try to confirm Judge Amy Coney Barrett before Election Day. Even as they prepared to publicly question Mr. Comey, Judiciary Committee aides were working overtime to prepare for nationally televised confirmation hearings in less than two weeks.

Democrats are furious and are certain to use Wednesday’s hearing to protest that Republicans are rushing ahead without them. They have accused the Republicans, led by Mr. Graham, of hypocrisy for going back on statements that a president should not be allowed to fill a Supreme Court seat so close to the election.

Though Mr. Graham’s investigation into the F.B.I. long promised to bolster Mr. Trump’s re-election campaign, it has now also become tied up in Mr. Graham’s own increasingly arduous race to stay in office. The three-term South Carolinian is facing an unexpectedly strong challenge by Jaime Harrison, a Democrat who has gained traction — and millions of dollars in donations — by attacking Mr. Graham as a spineless lackey for Mr. Trump. The race is still Mr. Graham’s to lose, but he has taken to openly asking for campaign donations in Fox News appearances.