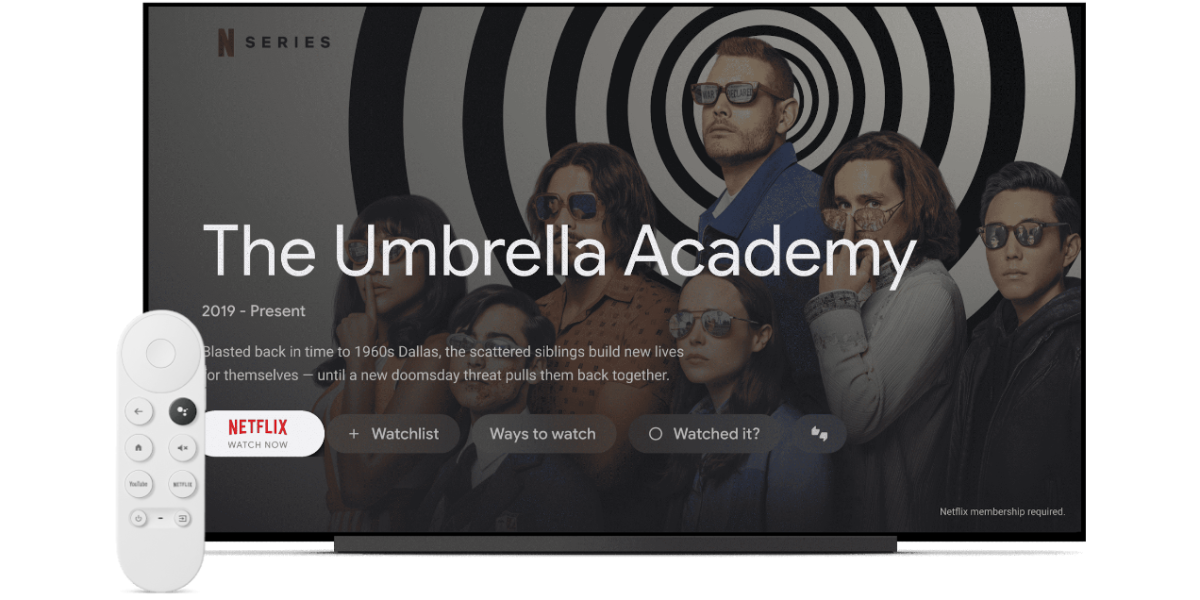 At its Launch Night In event today, Google officially unveiled Chromecast with Google TV. The new TV dongle is available starting today in the U.S. for $50 (it’s coming to more countries by the end of this year). That’s quite cheap given that it comes with its own remote control and dedicated user interface. The latter is so important to Google that the company put in the product name. “Think of Google TV as your personal entertainment content curator,” Google TV general manager Shalini Govil-Pai said. “We will be bringing the Google TV experience to many more streaming devices in the Android TV ecosystem. Today, Google TV is making its debut on the all new Chromecast.”

Like all the Google products announced today, Chromecast with Google TV has been leaking for months. The real news here is the confirmation that Google is giving Android TV another go by bringing back Google TV. (Android TV launched in June 2014, succeeding an even earlier smart TV effort from October 2010 called Google TV. Yes, Google rebrands as often and as poorly as Microsoft.) It appears that Android TV will continue to exist, and Google TV is an additional interface that runs ontop.

The smart TV space is largely dominated by Tizen and webOS globally, with Roku and Amazon’s Fire TV winning over U.S. consumers. While Google saw plenty of success with its cheap Chromecast TV dongle early on (55 million sold in three years, consumers did not convert to Android TV as they upgraded their TV experience. Google is hoping it can use the successful Chromecast to revive its smart TV ambitions.

With the streaming wars heating up, the game streaming battle igniting, and the pandemic dumping fuel on both, this is Google’s latest attempt to claim the biggest screen in your home. Its Google Home smart speakers (slowly being rebranded under the Google Nest Home) are already in millions of homes, but we are visual creatures and screens are still the golden goose.

Again, Google is highlighting the software for this Chromecast because it actually has an operating system and a user interface. Previous Chromecasts simply let you cast whatever you were already streaming on your phone or PC — a simplicity that was key to its success but also ultimately led to users looking for a replacement.

Welcome to Google TV. The entertainment you love, with a little help from Google. 📺 Available today. pic.twitter.com/qJYSbWWUeM

Still, Govil-Pai highlighted today what exactly Google TV lets you do. Google TV’s main home page shows titles pulled from all your streaming services like Netflix, Hulu, and HBO Max. (It also shows options from other channels that you don’t have, to show you what you’re missing). A big chunk of the user interface is dedicated to showing you suggestions of movies and TV shows that it thinks you might want to watch.

The hardware is also keeping up with this paradigm shift. If users are going to be doing more than casting, Google is making sure Chromecast with Google TV ships with its own remote control, unlike its predecessors. The remote features a directional pad and dedicated buttons for Google Assistant, YouTube, and Netflix.

Chromecast with Google TV supports 4K and HDR. It works with multiple Google accounts, as well as Bluetooth devices and USB-to-Ethernet adapters.

2020 has seen plenty of game streaming services debut in some form, including Microsoft xCloud, Nvidia GeForce Now, and as of last week Amazon Luna. Google launched Stadia in November 2019, but the response has been lukewarm at best.

It’s thus surprising that Google didn’t mention Stadia when discussing Chromecast with Google TV. The company reserved that for the Pixel 5 and Pixel 4a 5G section. Presumably Google will talk up Stadia for the new Chromecast when the company deems it ready for your TV.