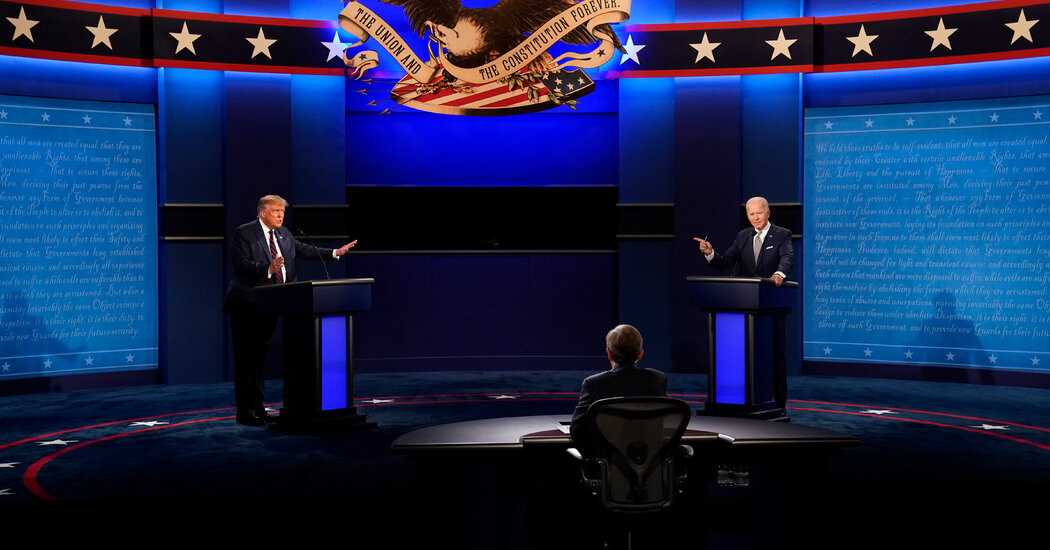 The debate on Tuesday night was an embarrassment for the country and for the office of the president. I never thought the format was any more than a contest of stump speech hits and rehearsed one-liners. President Trump’s thuggishness broke an already cracked mold and exposed this for all to see.

Joe Biden should refuse to participate in the remaining scheduled debates unless some degree of decorum is returned to the event. For sure there should be a mute button to allow uninterrupted responses. But in the future, real debates should be considered, where one subject is explored and each candidate given ample time, not a two-minute sound bite, to express his views and to respond.

This will not be as entertaining as Tuesday’s free-for-all, and the ratings will not be as big, but perhaps those who watch will come away with more than unfulfillment and frustration. The potential is for an even a greater understanding of the candidates’ acumen and of the key issues facing the nation. Do we deserve less?

Re “After That Fiasco, Biden Should Refuse to Debate Trump Again” (column, nytimes.com, Sept. 30):

Frank Bruni opines that Joe Biden should refuse to participate in further debates after President Trump’s obnoxious and schoolyard bully performance in the first debate. That would serve nothing other than giving Mr. Trump and his cronies an opportunity to crow that Mr. Biden is too afraid to debate him.

Just because Mr. Trump is afraid of a civil debate is no reason to deprive the American voters of one.

It was frustrating to wake up to media headlines along the lines of “Trump Failed to Denounce White Supremacy,” because his actions were far worse: The commander in chief, from his debate lectern, issued clear instructions to a violent, racist hate group: “Proud Boys, stand back and stand by.”

This energized and empowered the group; it is seizing the president’s words and using them as a recruitment tool.

I’m just a regular guy who voted for Donald Trump in 2016 and wanted to listen to the two candidates debate the issues. So much for that waste of time. What I really want to know is, was that a debate? I hope not. I got through 53 minutes and then I had to turn it off.

Aren’t there rules of debating? It is of no value to me to hear one person shouting over the other so I can hear neither of them. Aren’t the debaters supposed to listen to the moderator? What a disappointment. If they can’t act presidential, could they at least act like adults!

Even through the din of the debate, President Trump’s message and creed were loud and clear: “Rules do not apply to me.”

Judge Judy must be called upon to moderate any future debate between Donald Trump and Joe Biden.

I think Joe Biden missed a golden opportunity to distinguish himself as a person who respects the institutions of our nation. He should have pointed out that while he found President Trump to be a totally incompetent president and one who has deceived the American people, he did respect the office of the president and should have refrained from calling him a “clown” “and telling him to “shut up,” especially at a time when a lack of decorum among our political leaders has gotten much deserved attention.

At least close to home, Melania Trump’s anti-bullying campaign is an abject failure.

I saw 30 seconds of the presidential debate, almost by accident. I later texted with my older son, Jules, to see what he thought. His response was that if you are a Trump supporter, then President Trump won, and if you are a Biden supporter, then Joe Biden won, and by not watching, I won.