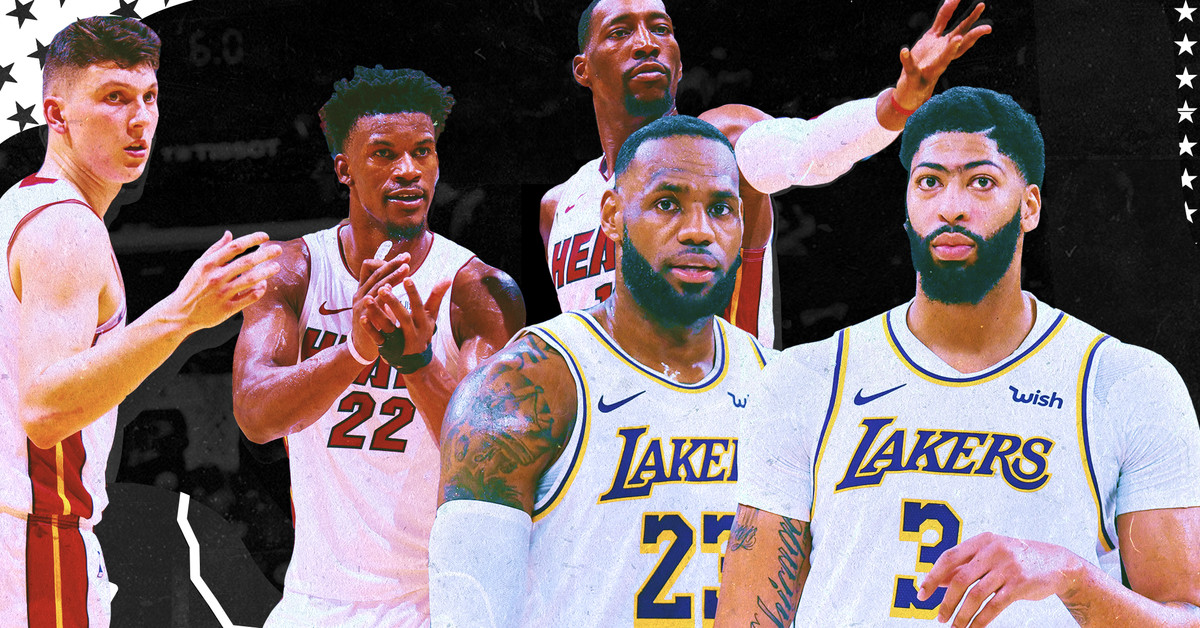 It’s basically October and the NBA Finals are … here? It’s been an odd few months but we’ve nearly made it through the entire postseason in the NBA bubble and it’s finally time to crown a winner. We sat down with Sabreena Merchant, writer for our Lakers blog, Silver Screen & Roll and Surya Fernandez, Editor-in-chief of our Heat blog, Hot Hot Hoops to get us prepared for the matchup.

Nobody knows these teams better than these two, so let’s get to the important stuff.

So, how does it feel to be back in the NBA Finals?

Sabreena Merchant, Silver Screen & Roll: It feels great. Really, really great. I thought the last seven years had desensitized my Lakers fandom, that I had developed a healthier way of appreciating the team having gone through some low points. Not even close. I have lost my mind during this Lakers playoff run. It is so thoroughly enjoyable to watch this team win, especially as a group that defies modern trends and resembles some of the Lakers teams I grew up with in terms of their sheer physical dominance. It is incredibly satisfying to see the Lakers back on this stage, where they belong.

Surya Fernandez, Hot Hot Hoops: I’m not even sure I’ve fully processed what this one feels like yet. It definitely feels more like the first time in 2006, where players blossomed and grew under pressure, compared to the Big 3 era, when they were expected to be perennial title contenders.

What was the world like the last time your team was in the Finals?

SF: This team has had a lot of ups and downs since the last time in 2014: Chris Bosh’s health issues, Dwyane Wade’s departure and triumphant return, 11-30, 30-11, and missing out on the playoffs late in the season three times — including last season. Back then, we were all thinking Miami had a dynasty in the making and that this would be an annual event after four straight trips. Little did we know how hard it would be to climb back to the Finals.

Should we consider the winner the legitimate NBA champion for the 2019-20 season?

SF: Yes of course. The playoffs have been very memorable, not just for the outside circumstances for this to happen but for the actual game. None of that has been compromised either leading up to the Finals, whether it was major injuries or large-scale quarantines of teams or players that would have affected the outcome. I was a little skeptical at first but I was hooked right in immediately — and those were just warmup games.

SM: There is going to be an asterisk on this title. There has to be, considering the entire format of the season was upended midway through the year. But there were asterisks on the 1999 and 2012 seasons because of the NBA lockouts, and I don’t think the Spurs or the Heat feel any worse about those titles. If anything, the success those teams achieved in subsequent years showed that those runs weren’t fluky at all. The Lakers or the Heat will have deserved this championship, and it’ll count the same as any other one.

Will the lack of a homecourt advantage matter to your team?

SF: The lack of homecourt advantage is a big missing factor, both positively and negatively, but all things are truly equal so all the teams are playing on an even field in the bubble. Miami has been the lower seed every round so they’ve taken advantage of the situation. They were clearly at their best at home in the regular season though, but this is a team that happened to be custom-built to thrive in the bubble.

SM: After so long in the bubble, I don’t think homecourt even enters the calculus of either team, except for Anthony Davis, who repeatedly talks about protect homecourt as the higher seed. The Lakers seemed to miss playing in fans at the beginning of the restart, but they’ve adapted. They haven’t any made any big comebacks that you’d associate with the rush of the home crowd, but they also haven’t been down that much.

The lack of homecourt is going to matter when the trophy is presented. That moment demands an audience, and it’ll be weird not to have one.

Who is the most important X-factor on your team?

SM: Frank Vogel. Erik Spoelstra has seemingly surpassed Nick Nurse on the list of everyone’s favorite NBA coach this offseason, and the general consensus is that while the Lakers have the talent advantage on the court, the Heat have it on the bench. But Vogel has been quietly excellent throughout the postseason, mixing and matching rotations while still keeping the Lakers’ big, physical identity intact. He’ll have to push the right buttons once again versus a Miami team that is more versatile and adaptable than any opponent the Lakers have faced thus far.

SF: I don’t have a clear answer for that, which is probably why they’re in the Finals to begin with. Butler, Adebayo, Herro, Dragic or even Robinson could all be good candidates.

Which player on the other side are you most concerned about?

SM: Bam Adebayo. No team to this point has had anyone with a prayer of guarding Anthony Davis, though Paul Millsap did a much better job than was expected. Adebayo, though, is a defensive menace with the size and speed to keep up with AD.

SF: LeBron clearly has the motivation for several reasons. He will look to be aggressive at all times.

What has to happen for your team to win the Finals?

SF: A complete team effort, like it’s been since the beginning of the season (a year ago), with at least two players stepping up big in crunch time on both ends. No silly fouls either because the refs will call them, let’s say, “tightly” on the Heat if we’re going by the last two rounds. They won’t be able to stop LeBron or AD, but how much they can limit them and how will they defend the rest of the Lakers? If Erik Spoelstra and the coaching staff can solve that, and they’ve been at the top of their game in these playoffs, then the Heat have a real chance of outlasting the Lakers.

Alright, who will be Finals MVP?

SF: Jimmy Butler, it would just be too perfect of a way to end this crazy season.

And your finals prediction?

SF: Heat swept the Pacers in the first round, dispatched the Bucks in 5, and handled the Celtics in 6 so I’m going with Heat in 7.