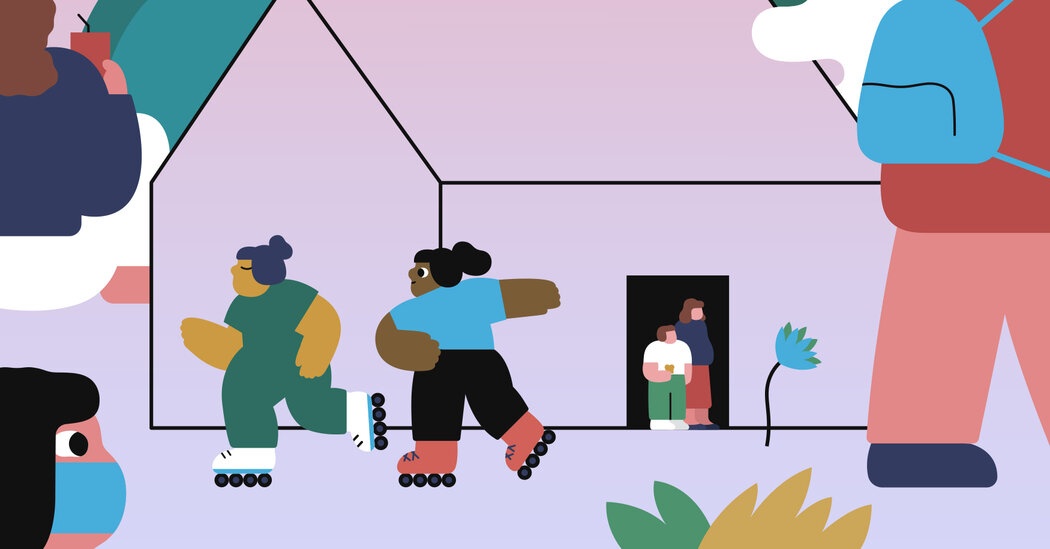 When my son, Isaac, was a year old, our family crash-landed in Brookline, Mass., for medical reasons. My husband was recovering from a near fatal blood-clotting episode and weeks in the I.C.U. It was very far away from where we had started as expatriates working in Dubai, the jet-setting city we’d long called home. We settled in New England, uncertain if my husband would ever work again or if he needed a high-risk brain surgery. But the doctors told us we were lucky, the odds had strongly been in favor of his death.

Then, a year after we moved, I woke up one morning with spots in my eye. I visited five specialists before finding out I have an autoimmune disease that could threaten my sight. My vision is currently preserved by a strong cocktail of medicines, but that could change at any point.

Before the coronavirus, we felt giddy to be alive; to be parents together, to be back to work and starting to build a new life for ourselves, one in which my husband was healthy enough to run races with our son in the park across the street from our home, just like the other fathers. Then the pandemic struck and the bottom dropped out for us — and for the rest of the world.

Pre-pandemic, barely anyone knew about our personal health, and we liked it that way. In particular, Isaac, who is now 4 and an only child, had no idea. We aren’t sure if my husband’s condition is hereditary and doctors don’t know how to test for it, and all of that didn’t feel right to share with a preschooler.

Now, before we so much as go to the park for a masked play date, we have to disclose these health issues, so that other parents know how serious it is that we all keep safe when we see one another. As a result, everyone has become too afraid to see us or let their kids play with our kid.

And Isaac really needs a best friend right now — but I can’t find him one because most of his friends’ parents are ghosting us. I text them to see if we can meet up in a socially distanced way, and they shoot back replies with exhausted-looking avatars, parent code for “We’re in this together.” But when I get into the logistics and reveal that our health requires us to avoid playgrounds, wear masks, keep a genuine distance, not share food, and avoid meeting entirely if anyone has interacted with someone who’s tested positive, the parents disappear, and I have to explain to Isaac that it’s not because kids don’t like him.

Three months into lockdown, we tried to form a pod with a neighbor and her family. We only got together once, but my son still cries about it because it was the one normal moment of that totally upside-down time. It was like we were taking him to a toddler job interview to meet this girl. We coached him on how to keep a distance, be a good listener and stop his mask from slipping. Isaac doesn’t always listen, but he followed those rules as though he’d signed a contract. Although his mask inched down his nose twice and he had to be reminded how to take turns after 90 days where every turn was his, Isaac played well with his friend, both of them picking dandelions and digging holes in the mud with acorn branches.

When I texted the mom to meet up again, she said they were reassessing their family’s policies and then never got back in touch, not even when we mailed a thank-you note. What do I tell my son about why this friend who he asks to be inserted into bedtime stories as the princess he saves the world with each night can’t see him? Like a teenager trying to work through a confusing breakup, I still sometimes find myself turning the situation this way and that in my mind, struggling to find some closure. Did we somehow offend them? Were they worried they could get us sick? Or did they think our frail immune systems might make us more susceptible to getting them sick? Maybe they just got wrapped up in the stressors of pandemic life and didn’t realize how much their silence affected my child.

Until another bad play date, one I’m still kicking myself for arranging, Isaac had no idea his parents were different or that he had anything to fear. It was raining that afternoon and I assumed no one would be at the school tennis courts, so we tugged on our rainboots and inched past the playground overrun with parents and kids, many not bothering to wear masks.

I wanted to call out those parents for keeping my child from playing there, in a space that should be his to share; I wanted to call them selfish, but I said nothing. They were probably exhausted to the bone like me, dragging something invisible and heavy behind them too, all of us a collective GIF of that cheesy-wonderful Brad Meltzer quote, “Everyone you know is fighting a battle you know nothing about.”

Isaac’s friend Jonathan rolled up in a double wide stroller with his baby brother. The boys splashed in puddles on either side of the net for a few minutes before two other friends — little guys we used to play with every day but hadn’t seen in months — unexpectedly appeared, bounding onto the court. In a flash all of them sprinted off in a pack, over to the playground, the anxious parents tailing them like foxes at a hunt.

Isaac started to follow but I caught him in my arms. “We can’t go there,” I told him helplessly. “Our family has different rules. We have to be especially careful of the germs.” I carried him, crying from the playground, and away from his three best friends sitting shoulder to shoulder on a bench, swinging their legs in unison. In that instant he realized that we have illness in our house, that we have something more to fear than even the coronavirus.

Now, he regularly worries about the polka dots in my eye and the boo-boo on his dad’s brain. He brings us blankets and thermometers, although for the most part we feel well. “It’s not your job to make us happy or keep us healthy,” I tell him, brushing the matted corkscrews from his forehead and feeling guilty about the price he pays for our diseases.

Recently, Jonathan’s mom invited us for a play date on her front lawn. She filled up two identical giraffe pools and the boys waded around, separated by a walkway we dubbed the Demilitarized Zone. It felt like summer for a second, like the old days when my son was first learning how to have and be a friend and no one reduced me to just the sick parent. That old life is so near yet so painfully impossible, for myself, for Isaac, for us all. There were masks and Lysol cans, but we couldn’t throw our wet arms around one another’s waists, and we didn’t know what the fall would bring.

It’s been lonely at our house, sterile even. Sometimes Isaac stands at the open living room window and shouts hello to small figures zipping by on scooters beyond our front gate, but they just keep rolling by as though he is a ghost. After a while, he just wants to huddle on the basement couch in a smudge-brown blanket watching Captain Underpants, refusing to build pillow forts, draw comic books or do messy science experiments with me.

A microschool would be a great idea, but it’s out of the question because being high risk makes our constraints too strict for other families’ quarantining styles. We went back and forth debating every option from home-schooling to an adventure preschool that meets outside even in the snow, but ultimately, we decided to send Isaac back to the neighborhood preschool that he loves even though it’s not the safest decision — maybe even one that could land us in the hospital. He needs to see other kids consistently, and he’s not learning to share, stand up for himself, have a friend or be a friend all by himself in his rainbow-colored bedroom.

The first Friday of school it was drizzling, and parents were asked to wear masks and wait in distanced lines inside the building’s lobby. I knew I couldn’t risk going through that door, so I texted the school director to ask if she could meet us outside. “I’m happy to help,” she typed back, already on her way.

But she didn’t even have the chance to get to us. Another mom who knows my situation, saw Isaac and me lingering awkwardly near the sidewalk and asked him if she could be his substitute parent and escort him inside. She even gave him an air hug goodbye. That afternoon at pickup, those same doors were flung open by my child, who jumped into my arms.

I could tell his eyes — my eyes — were crinkling with joy, even from behind his dinosaur mask. I couldn’t help it, but I teared up with gratitude then, that we are still here together, starting over one more time.