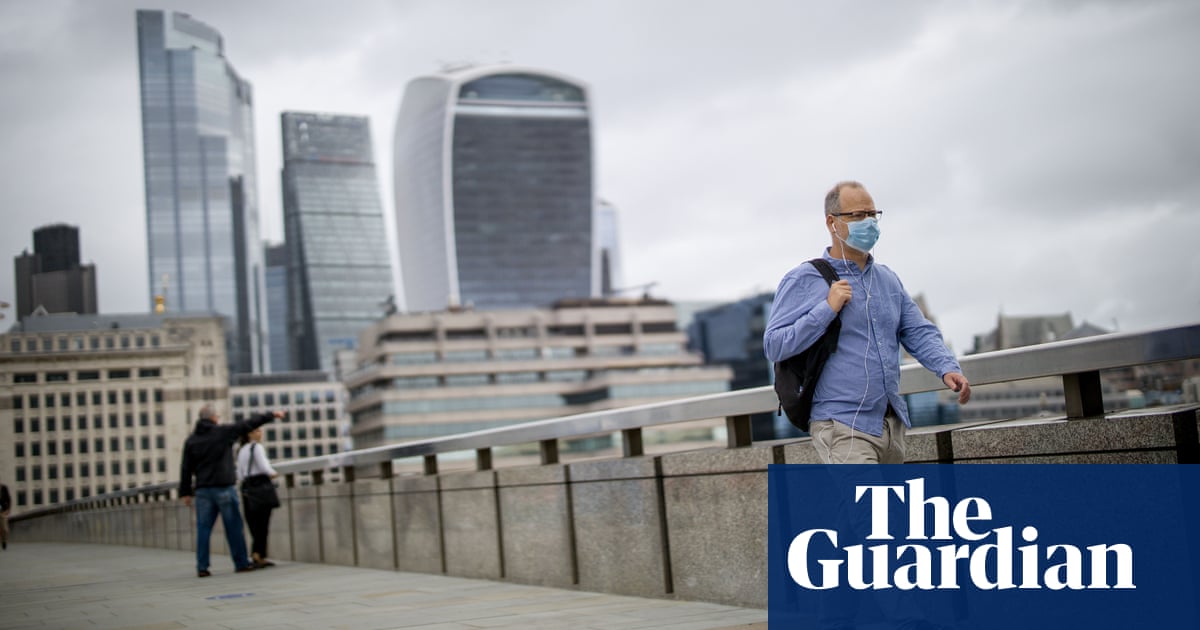 Britain’s economic recovery from the coronavirus pandemic was showing signs of faltering even before the onset of a second wave in infections, a Guardian analysis of economic developments in the past month has shown.

As the chancellor, Rishi Sunak, extends job support measures to tackle growing numbers of redundancies, early warning indicators for growth suggest business activity stumbled in September before a difficult winter ahead. Global financial markets have sold off sharply and the number of car journeys being made around Britain has cooled after a late summer boom for domestic tourism.

Faced with rapid growth in coronavirus infections and tougher restrictions on business and social life introduced to control the pandemic, Sunak’s winter economy plan comes as the government faces a difficult six months ahead to protect jobs, households and businesses during the second wave.

It comes as the head of the International Monetary Fund, Kristalina Georgieva, warned the economic shock from the pandemic threatens to drive up inequality around the world if left unchecked. Writing in the Guardian, she warned a “lost generation of the 2020s” risked being created by severe economic and social upheaval.

“Make no mistake: without urgent action, we risk deepening the divide – globally –between the rich and poor. The impact will be profound – and not only in low-income countries,” she said.

The Guardian has chosen eight economic indicators, as well as the level of the FTSE 100, to track the impact on jobs and growth from Covid-19 and the measures used to contain it. Faced with the deepest global recession since the 1930s Great Depression, Covid crisis watch also monitors how the UK is faring compared with other countries.

On the dashboard this month are several positive signs for the economy before the introduction of new restrictions to contain the pandemic.

Retail sales increased for the fourth consecutive month in August to rise well above pre-pandemic levels, as shoppers gradually return to high streets, and continued to spend more money online.

The reopening of pubs, restaurants and non-essential shops helped gross domestic product (GDP) to rise by 6.6% in July, clawing back some of the ground lost with the country in the deepest recession since records began, as the lifting of lockdown encouraged catch-up spending by businesses and consumers.

However, activity is still well below pre-pandemic levels in the broader economy, while consumer caution amid rising Covid cases and tougher restrictions are expected to further dampen economic activity over the coming months.

With the risks of a double-dip recession mounting, economists warned Britain’s economy was heading for a prolonged recession lasting until next spring, dashing hopes that the Covid recession would be among the shortest in history.

Torsten Bell, the chief executive of the Resolution Foundation thinktank, said: “After swift bounce-backs in GDP and retail sales from the total economic stagnation of lockdown, the recovery was slowing – even before the recent return of rising virus cases and social distancing restrictions confirmed difficult months lie ahead.”

Despite millions of workers being brought back from furlough as the economy regained a steadier footing in the summer, the number of redundancies in the UK accelerated at the fastest pace since the financial crisis in July.

While the proportion of the UK workforce on furlough has gradually fallen from a peak of 30% in May to about 12% by early September, some sectors still depend on support amid continuing restrictions – including in arts and hospitality.

A new job support scheme to follow furlough and a fresh extension in government-backed business loans is expected to help protect many jobs as the economic outlook deteriorates this autumn. However, economists warned the measures in the chancellor’s winter economy plan would fall short of preventing a dramatic surge in redundancies.

“Sunak’s inter economy plan’ was timely. But, in terms of labour market support, it’s clear that the new version of the widely successful job retention scheme is more light touch than the original,” said Sanjay Raja, an economist at Deutsche Bank.

“Bottom line, this new labour market support won’t do very much to stem the rise in unemployment.”