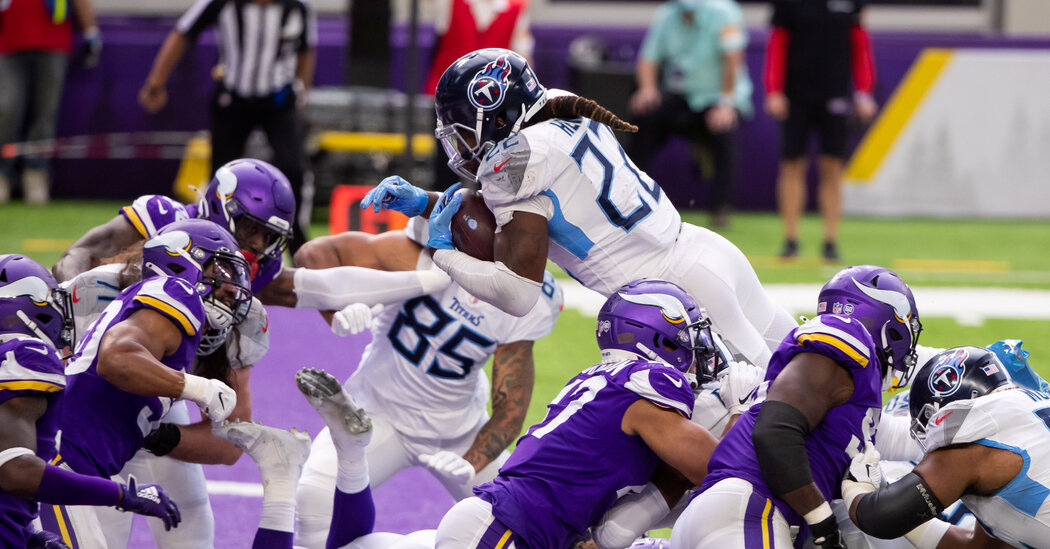 After an auspicious beginning to the N.F.L. regular season played during a pandemic, the league got news of its first coronavirus outbreak after Week 3’s games.

The Tennessee Titans suspended all in-person activities Tuesday after three players and five members of the team’s personnel tested positive for the virus, the first such outbreak to hit a team since training camps began in late July. The Minnesota Vikings, who hosted the Titans on Sunday, also shut down in-person activities.

“Both clubs are working closely with the N.F.L. and the N.F.L.P.A., including our infectious disease experts, to evaluate close contacts, perform additional testing and monitor developments,” the league said in a joint statement with the players’ union. “All decisions will be made with health and safety as our primary consideration. We will continue to share updates as more information becomes available.”

The Titans did not release the names of the players and personnel who tested positive, though Coach Mike Vrabel said after Sunday’s game that the outside linebackers coach Shane Bowen did not travel with the team to Minnesota because of Covid-19 protocol, which calls for sidelining staff who either receive a positive test or are exposed to someone who has.

The Titans’ outbreak reflects how a bundle of positive tests can jeopardize the viability of a season, as has happened in other professional leagues, though the N.F.L. did not say whether the affected teams’ Week 4 games — Tennessee hosts Pittsburgh, while Minnesota plays at Houston — will proceed as scheduled. That determination will be reached by Commissioner Roger Goodell in consultation with an eight-member group comprising coaches, executives and former players from various team affiliations that was established to prevent members of the league’s competition committee from making self-interested decisions on which teams might have to cancel or postpone games.

With the Titans’ and Vikings’ schedules in flux, the N.F.L. is now confronting the same issues that plagued Major League Baseball, another professional sports league that did not construct a so-called bubble environment for its teams in order to contest its regular season.

Throughout a tumultuous off-season, as transmission rates soared, team facilities closed and training camp protocols were revamped, the N.F.L. pledged that the pandemic would not prevent the season from starting on time, on Sept. 10 — and it did.

The N.F.L. had low positive rates throughout training camp in early August, when daily testing affirmed the teams’ obedience to protocols. Even as the league and its players’ union agreed to continue to test players every day, except for game days, the real challenge for the league came down to maintaining that same level of vigilance once the season started, when teams began traveling and the potential exposure increased.

The first three weeks of the season unfolded largely without incident, with only one player, Falcons cornerback A.J. Terrell, missing a game, last Sunday against Chicago, after being placed on the reserve/Covid-19 list. In the latest round of testing released by the league, which ran from Sept. 13 to 19, only five positive cases — none among players — emerged from nearly 37,000 tests given to 7,845 players and team personnel.

To diminish the spread, the N.F.L. has mandated that all coaches and sideline personnel must wear masks, gaiters or face shields during games and that players are “strongly encouraged” to do so unless they’re frequently substituting. The league has cracked down on noncompliant coaches, such as Denver’s Vic Fangio and Seattle’s Pete Carroll, by fining them $100,000 and their teams $250,000.

According to league protocols, anyone who tests positive but displays no symptoms can rejoin their team 10 days after the first test or after receiving two consecutive negative tests at least 24 hours apart, and being cleared by team physicians. Players and personnel who are symptomatic cannot return until 10 days after the onset of symptoms and at least 24 hours have passed since the individual had a fever without taking fever-reducing medications and be cleared by team physicians.