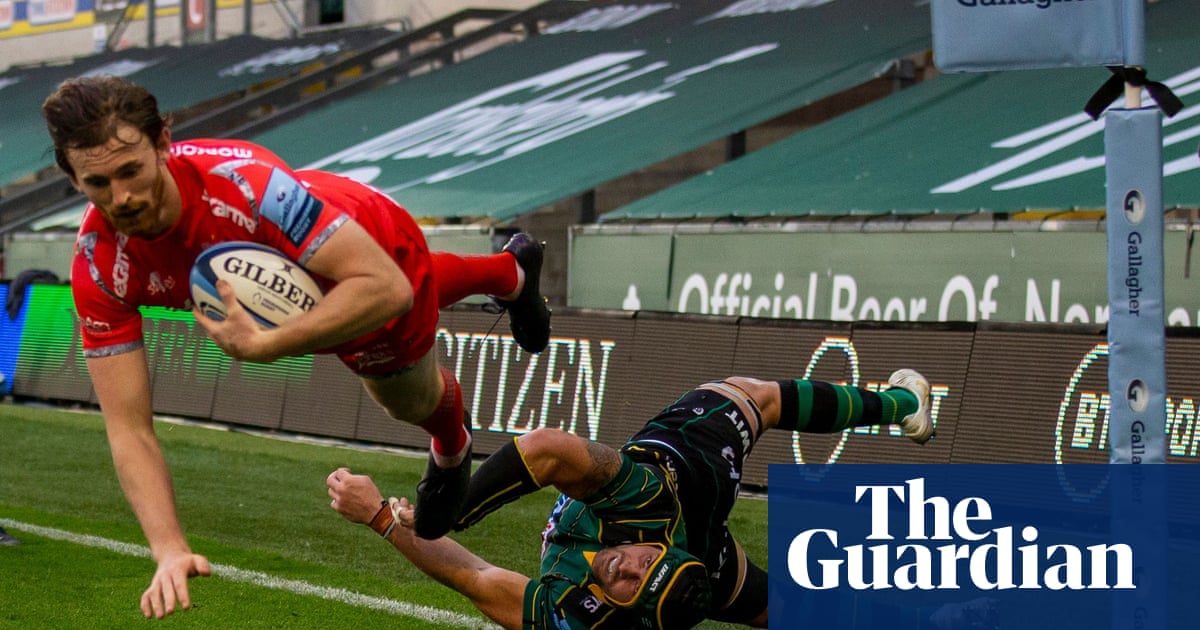 Manu Tuilagi and Courtney Lawes are major injury concerns for England’s autumn campaign after both limped off in the early stages of Sale’s emphatic win at Northampton, potentially handing Eddie Jones a significant blow.

Tuilagi went down with an injury to his left achilles soon after Lawes had hobbled off with an ankle problem and – with Jones naming a provisional England squad, without Premiership semi-finalists, at the start of next week – the timing is terrible.

With Sale strengthening their hold on a top-four spot after this bonus‑point win, Jones may not select Tuilagi regardless but he will anxiously await an update on his star centre and it would be major headache if either player is unable to begin England’s Test campaign on 31 October – the Six Nations finale against Italy.

Tuilagi, making his seventh Sale appearance since his lockdown move, must also be considered a serious doubt for the Sharks’ run-in, having required the help of two physios to leave the field after a 13th-minute collision. What is more, achilles injuries tend not to clear up in a hurry. “We were having a crack about how he has played so many games, maybe it’s a jinx,” said the Sale director of rugby, Steve Diamond. “They’re all serious until we see the doc – it doesn’t look good.”

Lawes had already been withdrawn when Tuilagi picked up his injury, having damaged his right ankle when chasing a restart. The extent of his layoff will similarly concern Jones, who is already set to be without Japan-bound George Kruis this autumn. “I wouldn’t be overly hopeful of a fast return,” said Northampton’s director of rugby Chris Boyd. “He sustained a pretty hefty blow to the ankle. It’s unfortunate for Courtney and it may be unfortunate for England.”

In between those two England injuries Sale also lost the South African lock Cobus Wiese on his first start for the club to a knee problem, while Dan Biggar hobbled off in the second half. Perhaps it should come as no surprise the attrition rate is so high – this was both sides’ ninth match in a little over six weeks – but it was not a good look for the Premiership on the day they confirmed next season’s fixtures, which begin less than a month after this campaign finishes.

Sale remain fourth but a bonus‑point win against Worcester on Sunday will secure their playoff spot. Even without Tuilagi they were far too powerful for Northampton, adding five more tries to Luke James’s opener after five minutes. For Northampton it was a similar story since the restart and a seventh successive defeat at home. Not that they have long to regroup but the end of this season cannot come quickly enough.

Sale were off the mark after five minutes, James finishing off in the left corner after a delightful floated pass from Rob du Preez. Their second was a penalty try – Api Ratuniyarawa sent to the sin-bin for infringing – and while Northampton responded with a well-worked score from Ahsee Tuala, Sale had a third, and a second for James, after Biggar was embarrassingly nutmegged by the Sale full-back’s grubber.

Simon Hammersley plunged over for a fourth try and the bonus point just before half-time and while Alex Mitchell – lively throughout – grabbed a second, Rohan Janse van Rensburg extinguished any hopes of a home comeback from close range and Valery Morozov added the sixth for good measure.