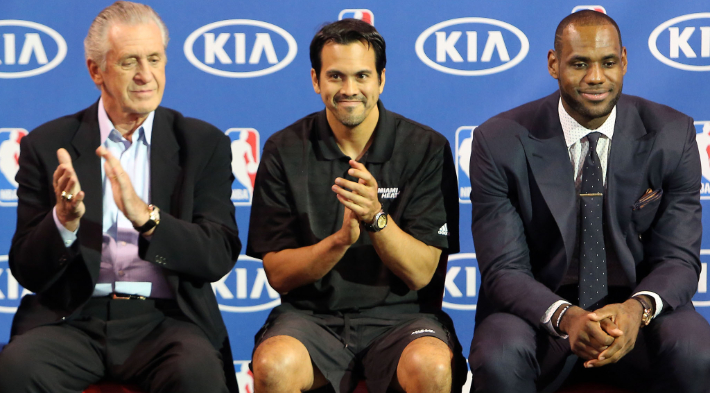 Perhaps the most fascinating subplot of the 2020 NBA Finals, outside of the fact that it is being played in Disney World amid a global pandemic, is that it pits LeBron James against the Miami Heat, the organization he left in 2014 to re-join the Cleveland Cavaliers. A whole lot of reporting has been done about his departure from South Beach, which did not seem to happen under the friendliest of circumstances between a player who wanted to win “not five, not six, not seven” rings with the organization, and a franchise that has never taken falling shot on anything particularly well.

Now, the Heat have a chance to show LeBron the error of his ways, while James gets the opportunity to take down Pat Riley, Erik Spoelstra, and co. on basketball’s biggest stage. Still, as James tells it, there’s no added motivation of any sort to beat the franchise for which he once played.

“Absolutely not,” James said. “There’s no extra meaning to winning a championship, no matter who you’re playing against. It’s already hard enough to even reach the Finals.”

In fact, James made it a point to praise both Riley and Spoelstra, lauding the former for his contributions to the game of basketball over the course of his decades-long career and saying that the latter has never gotten the respect he deserves for being one of the best coaches in the sport.

LeBron on Pat Riley : “He’s one of the greatest minds the sport has ever had. This league is not the same without him. He is a great guy, great motivator and just knows what it takes to win.” pic.twitter.com/5u7TnVWEUN

The Heat have long been praised as being one of the best organizations in basketball, which is where the whole “Heat culture” thing has come from over the years. Now, one person who played perhaps the best basketball of their illustrious career while they were in that system has the opportunity to take them down with a Larry O’Brien trophy on the line.