Much as 2016 threatened to put the brakes on political satire, so 2020 makes dystopian drama a difficult sell. Shows that revolve around doomsday scenarios, invasive governmental control and populations blithely accepting unthinkable changes to their everyday lives must now up the ante. Luckily, the latest series hoping to cut through Covid-era chaos is an adaptation of one of fiction’s most notorious and insidious futurescapes: Brave New World.

Unsettling fantasy worlds have become the stock-in-trade for Hannah John-Kamen, one of the show’s stars. In the past few years, the Yorkshire-born actor has played villains in Steven Spielberg’s 2045-set virtual reality epic Ready Player One and Marvel’s Ant-Man and the Wasp, spent five seasons as an intergalactic bounty hunter in the Canadian sci-fi series Killjoys and appeared in two Black Mirror tech nightmares. Star Wars, Game of Thrones and Tomb Raider also feature on her CV.

Fortunately, the 31 year-old is very much into disturbingly dystopian content. “I love things that are a little bit too close to home – thought-provoking things that freak me out,” she says, noting the parallels to our own recently altered state. “We’ve got a curfew! It’s all quite scary: the new norms of life and how we adapt so quickly.”

In Huxley’s novel, Helm is Helmholtz, a man who makes state propaganda. It is not the only male-to-female gender swap in which John-Kamen has been involved. Ghost, her character in Ant-Man and the Wasp, was a male hacker in the comics. The same goes for the bonkers and baffling Netflix adaptation of Harlan Coben’s thriller The Stranger, in which she played the titular role. John-Kamen is not inclined to read too much into this trend. “It is making it more representative, but I think if there’s a really interesting character in a book, regardless of whether they’re male or female – back then a lot of them were male, which is quite annoying – then why not [change their gender]?” 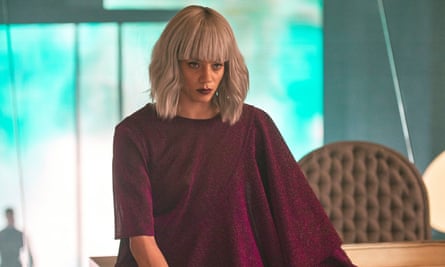 When we speak, John-Kamen is on her way back to her east London home, having finished a day’s filming on a project about which she is conscientiously cagey (“It’s a new movie, that I can say”). The logical conclusion is that it is another big-budget blockbuster (she is rumoured to be starring in the upcoming Resident Evil reboot). By now, she is used to huge productions: in 2015, she appeared fleetingly in Star Wars: The Force Awakens (“One of my lines made it, yay! With Star Wars, you never know”), followed by a meatier role in Ready Player One, as F’Nale Zandor, the head of operations for an evil tech firm. On set, she hit it off with Spielberg in a big way, singing show tunes with him between takes: “It was lovely to have really got on with Steven and had common interests. Such a wonderful man.”

The feeling was mutual – he helped her get her next part, in Ant-Man and the Wasp. “I did a camera test and alongside that Spielberg wrote a letter of recommendation to Marvel. It sounds so insane saying it out loud – I still pinch myself.”

Entering the Marvel universe with Ant-Man meant entering the world of comic-book obsessives – fanboys acting as fierce guardians of the culture they love. Did she worry about swotting up on her character in case she was caught out? “There are some things you need to be clued up on, but at the same time it’s a whole new beast,” she says. “It’s good not to be too religious to the original comics. People say: ‘In the book, you didn’t do that.’ It’s like: ‘Yeah, in the script, I do!’”

She is, however, very much on-message when it comes to the wider phenomenon of comic-book fandom. Conventions are “like another world in itself. It’s actually really, really fun – it’s great to see the fans dress up and escape their own reality.” She counts herself among them. “I was obsessed with Batman growing up. There’s something you take from it – strength you can apply in your own life.”

John-Kamen grew up in a village on the outskirts of Hull – not that you would be able to guess from her perfect RP tones. An early obsession with old Hollywood movies – especially Some Like it Hot – fuelled her acting ambition, one fully supported by her Nigerian father, a forensic psychologist, and her Norwegian mother, a former model.“It was never not taken seriously,” she says of her parents thoughts on her chosen profession. ”My plan B was to go back to the drawing board and make plan A happen. It was plan A all the way.”

One of her first parts after drama school was the lead in the West End production of Viva Forever!, the critically savaged Spice Girls jukebox musical written by Jennifer Saunders (the Telegraph called it “definitively, monumentally and historically bad”). Presumably, that was an unpleasant shock for a fledgling actor, I say. “I don’t read reviews,” says John-Kamen, quickly. “And it didn’t bother me, because the audience were having the best time. You’d have everyone in the front row standing up, singing Spice Girls songs.” She made the decision to avoid any press commentary “before I did this career. I don’t need to read a review of myself; there’s nothing I can do about it now. Even if it was a great review, I don’t need the praise. If it’s a bad review, I don’t need the negativity.”

Having started her career on stage, is she concerned about the impact of Covid-19 restrictions on the future of theatre? “I think this time is giving an opportunity to people to be innovative – online is a big thing now.” Change, she feels, is also urgently required elsewhere. “Certainly, there’s awareness – we’re all aware [of the problem],” she says of the lack of people of colour on screen. “But I definitely think more can be done now.” She cites industry award nominations as a major area that must be addressed, “in terms of what is represented in the categories and [actors] getting the recognition they deserve … I’m not going to go into specific examples, but you feel you’ve taken three steps forward then you’ll read about it or see someone else in this industry and go: wow, there’s now been 10 steps taken back again. It’s just a bit of a yo-yo back and forth at the moment.”

The frustrating pace of progress, combined with a year of pandemic-based upheaval, has only slightly dented her innate positivity. “I am an optimistic person, but I think, where the world’s at right now, the word is cautious. I’m cautiously optimistic at the moment.” With everyone from Spielberg to Spice Girls fans behind her, she has every reason to feel confident about the future. Luckily for her, she spends a lot more time there than the rest of us.