If the spring was marked by a national obsession with baking sourdough or banana bread, it seems that autumn is set to inspire a craze for cake-making. Decadently iced cakes, meme-worthy creations and bright pops of pastel and rainbow– all designed to look even better than they taste – are set to occupy home bakers through the looming uncertainty of the months ahead.

“All the ingredients are there,” says Will Torrent, innovation chef and patisserie expert at Waitrose. “Long nights drawing in, more time isolated at home, and the real need people have right now for good, happy, nostalgic times. Cake does that, it makes pretty much everybody happy. And making one is a very calming, soothing process.”

The therapeutic benefit of baking is a familiar trope in pop culture. From Kristen Wiig’s character Annie in the film Bridesmaids, pouring her existential angst into making the perfect cupcake, to practically every winner of The Great British Bake Off claiming their hobby provides distraction and comfort, bakers insist that cake-making offers methodical, scientific reassurance when life often doesn’t. Everyone else, it seems, would do well to have a contingency flan (sorry).

Over the summer, wackier cakes became a viral sensation with social media flooded with videos of knives slicing into everyday objects – an inflatable pool ring, a shoe, a dirty ashtray – only to reveal that they were actually made of cake.

Weirder and more unsettling still were the equally hyper-realistic cakes shaped as other foods. Take the perfectly plump aubergine, cleanly cut through to reveal its chocolate sponge inside, or the onion chopped to show it actually has jam at its core. The mindbending level of detail was attributed to the absurdity of the moment, an illogical internet food joke writ large as the world seemed to make less and less sense. 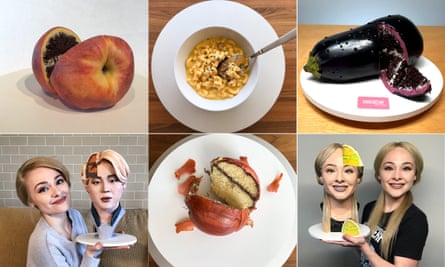 Some of the intricate and realistic cake creations by artist and celebrity chef Natalie Sideserf. Photograph: @sideserfcakes/instagram

Professor Rebecca Earle, a food historian at the University of Warwick, believes the spike of interest in baking makes sense of the current moment: “Baking a family recipe makes us feel closer to our absent grandmothers, mothers, aunts. Preparing their recipes is a form of conjuring, of summoning them up, of remembering them. [It is] an active process of remembrance that takes place not only in our heads but also in the sweet batter in a mixing bowl.

“Classicists employ the term ‘ekphrasis’ to describe creative practices that bring to life the nature or essence of a work of art from a different genre, such as a poem describing a painting, or a piece of music inspired by a novel. I think that preparing family recipes is an ekphrastic act. [Baking], perhaps humanity’s oldest form of art, momentarily connects us to our families.”

At Coven Bakery, hailed as “one of the true masters of Instagrammable cakes”, lushly rich and kitsch Alice in Wonderland-type creations are the order of the day. The business was set up in 2019 by two best friends – Harriet Gibson, 27 and Erin Luker, 30 – who have seen their follower count double in recent months.

“It’s been a stressful year on social media and people haven’t been able to treat themselves as they would in a normal way, so this is a relief from that,” says Gibson. “On Instagram, people are looking for an instant fix of something pretty, or a bit of escapism; our cakes seem to fill that space.”

Smaller cakes for six to eight people have been the most popular buys for customers, a trend confirmed by the chain bakery Hummingbird, which saw a surge of sales of small rainbow cakes when the country was clapping for the NHS.

Cakes bring people together, they offer a happy celebration or a random act of kindness, and baking can keep you sane

“For obvious reasons, there is a big demand for those as social gatherings are more limited,” said Simone Tasker, Hummingbird’s head of product development, “but I think Halloween will be a really interesting time for seeing just how creative and popular baking gets this year.”

Melissa Hall, 25, who set up her vegan bakehouse Jasmine’s Flour in January, is certain the classics will come back at home: “Your crumbles and lemon drizzle and carrot cakes will always be easy ways in. Instagram is a whole other story – people do wild kinds of baking for the ’gram – but I’ve noticed a real appetite from customers at the moment for simple, familiar classics.”

At Waitrose, baking ingredients and cake sales have soared: in the last seven weeks, purchases of celebration cakes are up 54% on last year, while cooking chocolate is up 55% and dark chocolate chips 274%.

Torrent is looking forward to a – well – torrent of “faultline cakes”: gargantuan creations split by ravines of sugar bombs and cream in the middle. He predicts that “anything with ginger, spice or salted caramel” will prove most popular with baking enthusiasts.

“Cakes bring people together, they offer a happy celebration, they can be a random act of kindness, and baking can keep you sane. Maybe cakes can save the nation!”