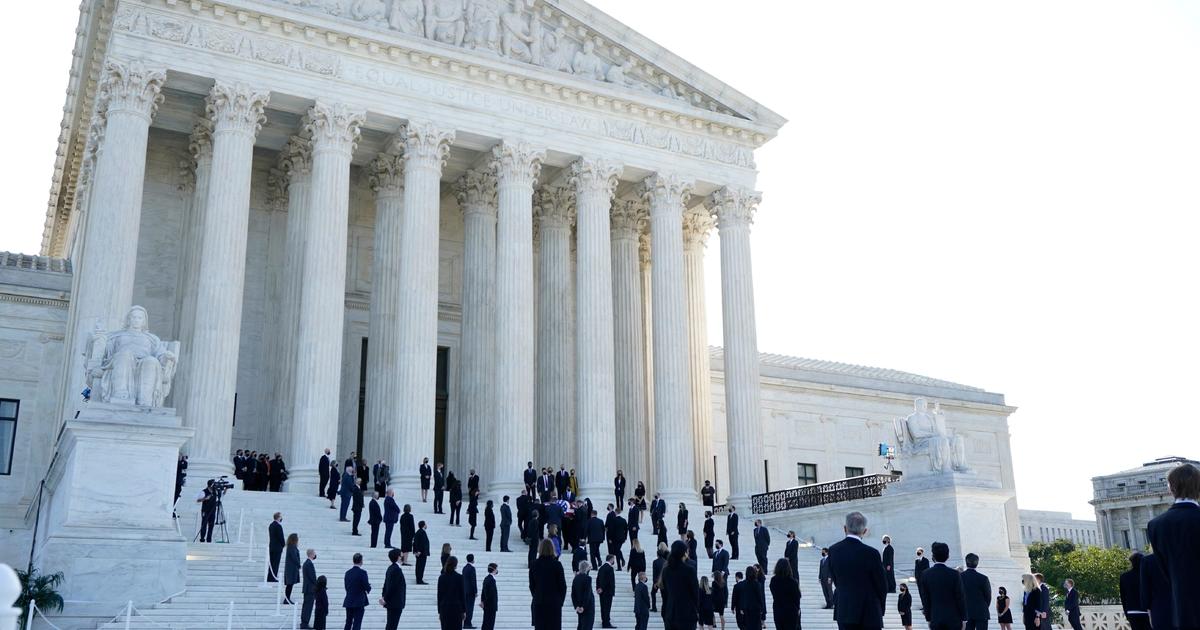 Washington — Democrats are fuming over the decision by Senate Republicans to move forward on a vote to confirm President Trump’s yet-to-be-named nominee to the Supreme Court to fill the vacancy left by Justice Ruth Bader Ginsburg’s death, four years after GOP leaders refused to hold a vote on a Democratic president’s nominee during an election year.

In 2016, Republicans in control of the Senate blocked President Obama’s nominee to the court, Merrick Garland, from even receiving a hearing, leaving the Supreme Court with only eight justices for over a year. Now, Senate Majority Leader Mitch McConnell and other Republicans argue that the court must have nine justices ahead of the November election.

Given the likely legal challenges accompanying the influx of mail-in ballots this year, it’s possible that the fate of the election could fall to the Supreme Court, which would have a 6 to 3 conservative majority if Mr. Trump’s nominee is confirmed before Election Day.

Fury over what they see as rank hypocrisy from Republicans has led some Democrats to ponder options that recently were considered fringe ideas, most notably adding seats to the Supreme Court. Some progressives say expanding the court, an idea known as “court packing,” is the only way to restore balance to a body that has become overtly partisan.

Senate Minority Leader Chuck Schumer told members of his conference that “nothing is off the table” if Democrats retake the Senate, indicating that he is willing to consider expanding the court. Senator Ed Markey, one of the more progressive Democrats in the Senate, has called outright for eliminating the filibuster and expanding the court. House Judiciary Committee Chair Jerry Nadler tweeted that if the Republican Senate confirms a justice after Election Day but before a new Congress is sworn in, “then the incoming Senate should immediately move to expand the Supreme Court.”

Christopher Kang, the chief counsel and co-founder of Demand Justice, a progressive group advocating for reforms to the Supreme Court, argued in an interview with CBS News that expanding the court would “restore balance and legitimacy to it.”

“What we’re seeing today, over the last couple of days, is the increasing realization that Republicans are going to exercise as much raw political power as they can to ensure that the Supreme Court remains a partisan institution,” Kang said. He noted that Democrats have won the popular vote in six of the last seven elections, but the Supreme Court has had a conservative majority for decades.

David Faris, an associate professor of political science at Roosevelt University, said that if Garland had been confirmed in 2016, the court would have had a liberal majority for the first time in his lifetime. “And I’m not super young,” he added. Faris pointed out that, if Mr. Trump’s nominee is confirmed, then five of the nine justices on the court will have been nominated by presidents who lost the popular vote. (Chief Justice John Roberts and Associate Justice Samuel Alito were nominated by President George W. Bush during his second term. Mr. Bush lost the popular vote in 2000, but won a majority in 2004.)

Faris, who wrote an opinion piece in The New Republic arguing in favor of adding seats to the Supreme Court, also noted in an interview with CBS News that the Constitution does not specify how many seats the court must have. Seats can be added or subtracted by acts of Congress, although the current composition of nine seats has been in place since 1869.

Faris argued that Republicans had effectively contracted the court in 2016 by leaving it as an eight-person entity for the period of time between the death of Justice Antonin Scalia and Justice Neil Gorsuch’s confirmation in 2017.

“Republicans manipulated the size of the court. They had the full legal right to do so, although it was not conducive to fair play,” Faris said. If a Democratic Congress and a Democratic president passed legislation to add seats to the court, it would also be within their legal right to do so, since Congress has the authority to set the size of the court under the Constitution.

Joe Biden, the Democratic nominee for president, has not embraced expanding the court. During the primary, he said Democrats would “live to rue that day” if they packed the court. Biden has also urged Republicans to vote against confirming Mr. Trump’s nominee. However, if elected president, Biden may have no choice but to act if congressional Democrats are behind it.

Amy Steigerwalt, a professor of political science at Georgia State University, told CBS News that the size of the Supreme Court was previously tied to the number of circuit courts across the country. If the court was enlarged to follow that principle, there would be 11 seats on the court. Some who have called for expanding the court, including Faris, have argued in favor of adding four seats.

Steigerwalt, who co-authored the book “The Puzzle of Unanimity” about consensus among Supreme Court justices, noted that the high court hands down unanimous decisions in roughly half its cases. The growing concern is that the Americans may see the court, which has typically been thought of as an apolitical body, as a partisan institution.

In high-profile cases, justices are now typically expected to rule in line with the party of the president who nominated them. Many Republicans, including the president, have criticized Chief Justice John Roberts for siding with the liberal justices on critical cases, even though he was nominated by Republican President George W. Bush. Some believe that adding seats to the court would help neutralize the idea that the court is a completely partisan body.

However, Steigerwalt said that some are worried adding seats to the court could simply reinforce the idea that justices are partisan actors, essentially “legislators in a robe.” That may lead to people questioning the legitimacy of the court — and states possibly deciding that they don’t need to follow its rulings.

“If the court issues a federal ruling, and then a new court comes in, and they then reverse the decisions, and the only thing that’s changed in the interim is the membership of the court, then it becomes really hard to argue that there’s a reason to uphold Supreme Court decisions to guide the rest of the nation,” Steigerwalt said.

Some opponents of expanding the court also question whether subsequent Congresses would go back and forth in adding and subtracting justices.

“Instead of tit-for-tat court packing, why don’t they just fix it?” Faris asked.

There are a few alternatives to adding seats to the court. Demand Justice supports reforms such as imposing term limits on justices and creating a binding code of ethics for justices. Establishing term or age limits for justices would, however, require constitutional amendments.

Although expanding the court still seems like a distant possibility, the likelihood that a Democratic Congress and president would add seats to the court increases if Republicans confirm Mr. Trump’s nominee before the election, Kang said.

“If [Republicans] are successful, I absolutely think that the momentum is absolutely going to be on the side of doing something,” Kang said.

Faris said that Republicans had the opportunity to look “super magnanimous” by not filling the seat ahead of the election. If Mr. Trump wins reelection and Republicans retain the Senate, then waiting to fill the vacancy wouldn’t matter anyway. That calculation changes if Democrats win the Senate and the White House.

“If [Democrats] do win, and then they pack the courts, it’s hard to see all of this as anything as a really hollow victory for McConnell,” Faris said.