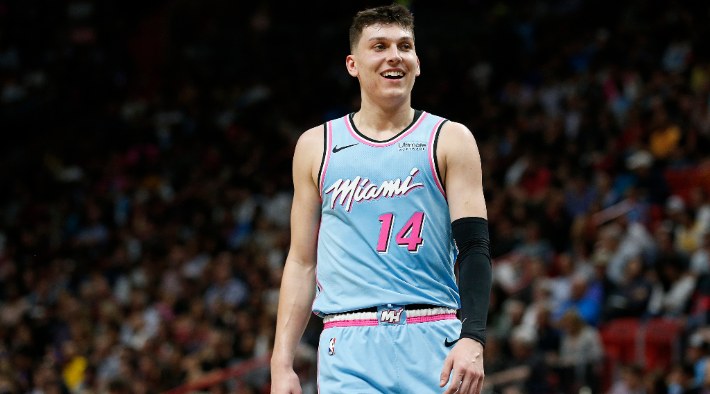 Each member of the Miami Heat has played a gigantic role in putting the squad into the position that they currently find themselves, one win from the NBA Finals. They are an incredibly deep and versatile team. But increasingly, they are winning games because of last year’s No. 13 overall pick, Tyler Herro, one of the youngest players in the NBA and someone who, unlike most rookies, has been even better and more vital in the postseason.

The Heat are a team of defined roles, incredible coaching, and disciplined execution. They win because each player knows exactly what is needed of them for each W, and are willing to sacrifice to be successful. But a huge reason they’ve gotten this far — one win from the NBA Finals — is because Herro burst from a supporting role to a major one this postseason and has given the Heat a much-needed scoring punch.

In Game 5 against Boston on Wednesday night, Herro scored 37 points on just 21 field goal attempts, including 17 in the fourth quarter. Despite the star talent of Jimmy Butler and Bam Adebayo, as well as playoff darlings Goran Dragic and Duncan Robinson, it was Herro who took the game home for Miami and put them within 48 minutes of their first Finals berth since 2014.

Like the rest of the Heat roster, Herro excels because he knows how to get open and get to his spots within the team’s spacious, smart system. But what’s taken him to the next level in these playoffs is his shot-making within the confines of head coach Erik Spoelstra’s rejuvenated move-and-share system.

In the regular season, Herro shot 41 percent on all pull-up attempts, but in the playoffs, he’s improved dramatically, nailing half of those looks on roughly the same volume. Though he’s still not a great finisher, his improved pull-up game has corresponded with an incredible uptick in mid-range efficiency. After making a subpar 39.4 percent from mid in the regular season, Herro has followed up by making, again, half of those tries through 13 postseason games.

At the same time as he’s become a better shot-maker, Herro has continued to play brilliantly. Even as a freshman at Kentucky, Herro had an inherent sense for how to play off of his teammates off the ball and spring open for easier shots. With the Heat’s talent, Herro’s feel for the game as a scorer has been even more impactful. Herro and Robinson don’t necessarily have the name recognition of the Splash Brothers, but like Warriors’ stars, they find each other, set screens, and move in the halfcourt in such a way that breaks down defenses like it’s 2015 in Oakland all over again.

That all means that as long as he keeps moving and doesn’t turn the ball over, Herro can trust himself to nail shots that most defenses are designed to give up.

Early in the final frame, Herro just shot right over the top of Kemba Walker, who even when he fought through screens just couldn’t contest Herro’s pull-up jumpers. Boston adjusted by taking Walker off the court, and Herro responded promptly by earning a “BANG!” from Mike Breen with a deep three in Marcus Smart’s face. The rookie can score from all three levels, and the Heat offense is so open and versatile that it is hard to key in on any one player too much. The result was a closing performance for the history books.

To do all this at just 19 is remarkable, but not unexpected. The baby-faced rookie came to the NBA Draft Combine last year with the savvy of a player many years older, name-dropping friends like All-Star Devin Booker and noting that he didn’t care where he was drafted or who his teammates were, that he trusted his own work ethic and IQ to take him where he wanted to go in the league. While he clearly took the time during the NBA hiatus to get much better as a scorer, Herro has also benefited from Miami’s infrastructure and offensive system.

After the game, Butler praised Herro for his confidence and poise. Surely any time a rookie closes a Conference Finals game, it’s a major accomplishment. But in the case of Herro, it was also the stacking of a bunch of different elements that all worked to give Herro the chance to do something special, and he answered the call.