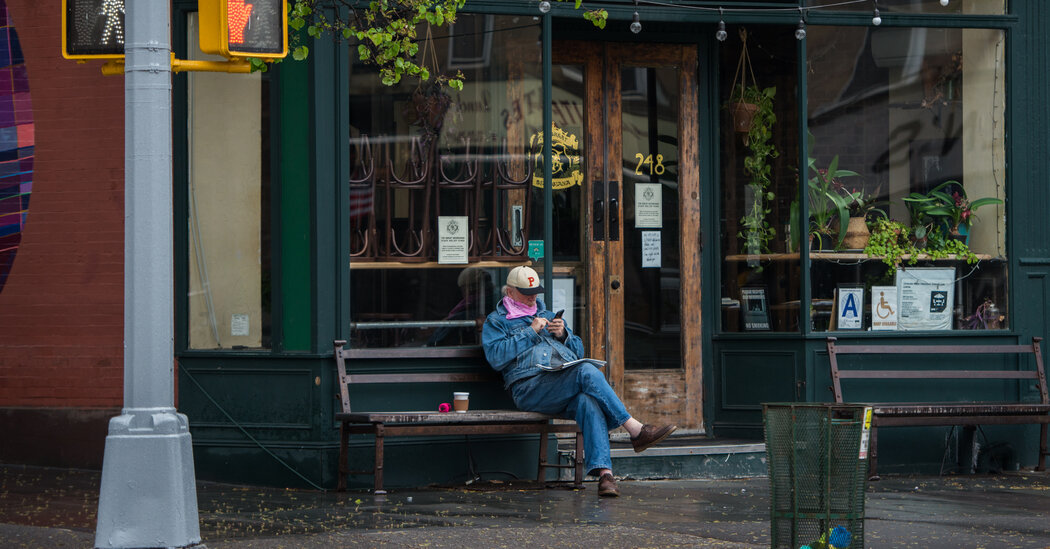 Right after I learned that the Department of Justice this week designated New York City an “anarchist jurisdiction,” alongside Portland, Ore., and Seattle, I took a walk around my Brooklyn neighborhood with freshly fearful eyes. There was an older man in a plaid shirt leaning against the fence of a basketball court, eyes closed, face turned up toward the autumn sunlight. Perhaps he was enjoying a moment of solace with nature before winter, when we will surely be driven back indoors by the coronavirus. Or was he gathering strength before smashing up the local Victoria’s Secret and bringing home the lacy loot to his wife, most likely another senior citizen demented by lawlessness?

A young mother pushed a stroller past me, clutching an iced coffee. A cold beverage when it’s 57 degrees out? OK, chaos agent! Two women sat on a stoop, talking in low voices through masks. One of them was knitting. Just like those Frenchwomen watching the guillotine come down, I thought, quickening my pace until I was halted by the city’s notorious vandalism. A childish hand had scrawled “Avoid the bees” on the sidewalk. Horrified, I stepped over some big yellow bumblebees drawn in chalk.

According to the Justice Department, New York City is an anarchist jurisdiction because we have “permitted violence and destruction of property to persist and have refused to undertake reasonable measures to counteract criminal activities.” William Barr, the attorney general, said, “We cannot allow federal tax dollars to be wasted when the safety of the citizenry hangs in the balance.”

Once I made it to back to the safety of my apartment, I called Robert Weide, who teaches a course on anarchist theory at California State University, Los Angeles. I learned that as it turns out, anarchy does not mean chaos. In fact, it’s a form of social order, just different from what we’re used to. It has many definitions; one of Dr. Weide’s is “living in a stateless society, a horizontal society that is run by direct democracy.”

It’s clear that by most measures, New York City in 2020 does not qualify. To be truly anarchist, we would need to exit the system completely. We would not pay taxes, we would not vote, we would not buy things we didn’t need — all preoccupations I can’t see us quitting any time soon.

But maybe there really is something going on here. “Anarchists say that in a crisis, people revert to what comes naturally to them, which is mutual aid,” Dr. Weide told me. I suddenly recalled some friends of mine who’ve been acting unusually since the pandemic. I told the professor about a comedy writer I know who recently paid for one hundred haircuts for kids before school starts. Another friend started a free book exchange in the corner of a city park. “Yup, that’s all anarchism,” he said. “All of that activity is based on an anarchist framework, whether the people who are practicing it know it or not.”

Even the term “mutual aid” comes from the title of a book written by Peter Kropotkin, a late-19th-century Russian anarchist and scientist. He proposed that humans actually stood a better chance of survival through protecting and cooperating with one another, and that is something we do naturally, without a coercive state controlling and patrolling our actions.

I looked again at my city. Anarchy sounds like neon green hair, but our hair is gray now. Many of us lived through some of the strangest and most frightening months New York has ever seen and are now too shellshocked to step back into the salon to get our roots done. Anarchy sounds like anger, and in truth I am furious. So many New Yorkers died because our government failed to protect us. When the virus came, it hit our city first and worst. We were left to fend for ourselves, just as the rest of the country is now.

Anger is a luxury we will indulge in when we come up for air in this battle with unemployment and child care and overdue rent. It’s strange — in all of this turmoil, there is a gentleness here now. Anarchy sounds like nihilism, like people don’t care about the future or one another, but that isn’t how New Yorkers are behaving. We are growing zucchini on our fire escapes and checking in on neighbors. And what we are doing is not surprising, according to Dr. Weide. “When there’s a hurricane, an earthquake, a tragedy, even people who are right wing in their political beliefs come together in their communities and support each other and help each other. That’s the epitome of anarchism,” he said.

When I think about who has given in to chaos, it is not New Yorkers. This administration is the nihilistic one, tearing up wildlife protection plans, sending asylum seekers away, beating up citizens on city streets. We didn’t abandon the state — it was the other way around. Aren’t they the ones causing the mayhem?

Dr. Weide chuckled. “I’ve joked to a lot of people that maybe Trump is actually a secret anarchist,” he said. “He’s dismantling American society. He’s done more to dismantle American hegemony than any anarchist could ever dream of.”

It’s certainly ironic, and I get the joke of it all, but I can’t quite laugh about it. I go back outside and see the pizza place has opened out onto the street, which is closed to traffic on weekends. There are slight wooden structures protecting diners, decorated with little pumpkins and potted flowers. Since the city stopped collecting compost, someone has set up a big bin for food scraps in a front yard. Signs in the windows read “Black Lives Matter” and “Vote. Vote. Vote.” I spot a new one outside the liquor store that reads “This Too Shall Pass” and I wonder if I want it to.

Maeve Higgins (@maevehiggins) is the author of “Maeve in America: Essays by a Girl From Somewhere Else” and a contributing Opinion writer.