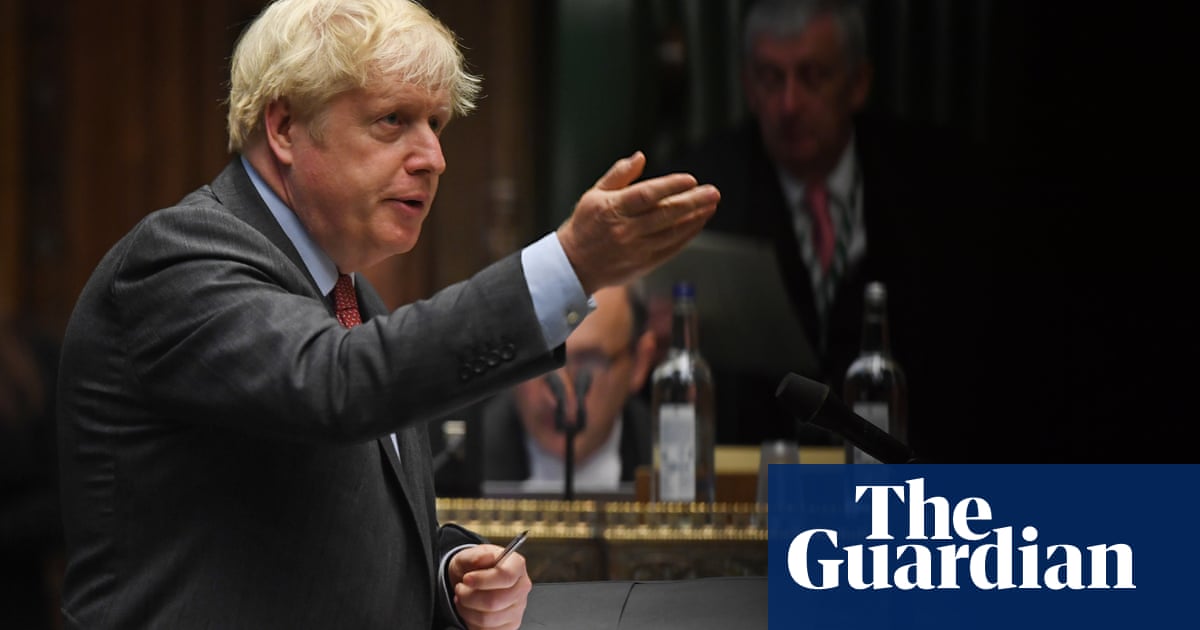 The UK is at a “perilous turning point” and must act, Boris Johnson has told MPs, announcing new restrictions for England including slashing the size of wedding celebrations and bans on indoor team sports, as well as a return to home working.

Speaking in the Commons on Tuesday, Johnson announced a ban on indoor team sports, such as five-a-side football, and said plans for a partial return of sports fans to stadiums from 1 October had been “paused”. Wedding celebrations will be limited to just 15 guests, half of the number previously permitted, though funerals will be allowed to go ahead with up to 30 mourners.

Masks will become mandatory for retail and hospitality staff, as well as for passengers in taxis – a key demand of the mayor of London, Sadiq Khan, who spoke to Johnson on Tuesday morning.

The prime minister said the restrictions may be in place for “perhaps six months” and warned there could be no complacency.

“After six months of restrictions, it would be tempting to hope the threat has faded and seek comfort in the belief that if you have avoided the virus so far then you are somehow immune,” he said.

“That sort of complacency could be our undoing. if we fail to act together now, we not only put others at risk but jeopardise our own futures with the more drastic action that we will inevitably be forced to take.”

As well as a 10pm closing time for pubs, bars and restaurants in England which was announced overnight, takeaway collections will also be closed from 10pm though deliveries will be allowed to continue, and pubs will only be allowed to offer table service, which will be enforced by law. Venues will be required by law to enforce the “rule of six” and social distancing.

The rule, which comes into force on Thursday, will mean venues must shut their doors at 10pm, rather than just call for last orders.

“This is by no means a return to the full lockdown in March, we are not issuing instructions to stay at home,” Johnson said, stressing that schools and businesses should remain open.

“But we are once again asking office workers who can work from home to do so,” he said, though stressed that key workers should continue to attend workplaces.

Johnson said enforcement would be set up and there would be extra funding to provide a greater police presence on streets, including “the option to draw on military support where required to free up the police”.

A Downing Street spokesman said the armed forces would not be involved in enforcement and would only step in to free police officers from other routine duties, such as office work or guarding sensitive sites.

Michael Gove, Cabinet Office minister, earlier confirmed what he described as “a shift in emphasis” back towards home working after weeks of news headlines where ministers exhorted workers to get back into city centre offices.

Downing Street has said that MPs will be expected to continue in their current arrangements but targets for civil servants to return en masse to Whitehall will not be continued.

The new measures come after a weekend of tense debate among cabinet ministers and scientists and are softer than those mooted in advice from government scientific advisers in recent weeks, which had included a two-week full lockdown as a “circuit-breaker”.

The prime minister emphasised the restrictions were likely for the long term. “We will spare no effort in developing vaccines, treatments, new forms of mass testing but unless we palpably make progress we should assume that the restrictions that I have announced will remain in place for perhaps six months,” he said.

“For the time being, this virus is a fact of our lives and I must tell the house and the country that our fight against it will continue.”

Johnson said there was still cause for some optimism in the battle against the virus and promised much of normality could be restored by spring. “Science is helping us every day. Dexamethasone, trialled in this country, is now reducing the numbers of death. We have the prospect of a vaccine,” he said.

“They discussed the rapidly worsening situation in London, including increasing ICU admission rates, and the need to go further now to prevent a disastrous full lockdown in future including mandatory face coverings for hospitality workers and more widespread wearing of face coverings,” a spokesman for the mayor said.

“It is clear that London has unique needs and challenges and additional measures need to be examined which are suitable for the capital.”