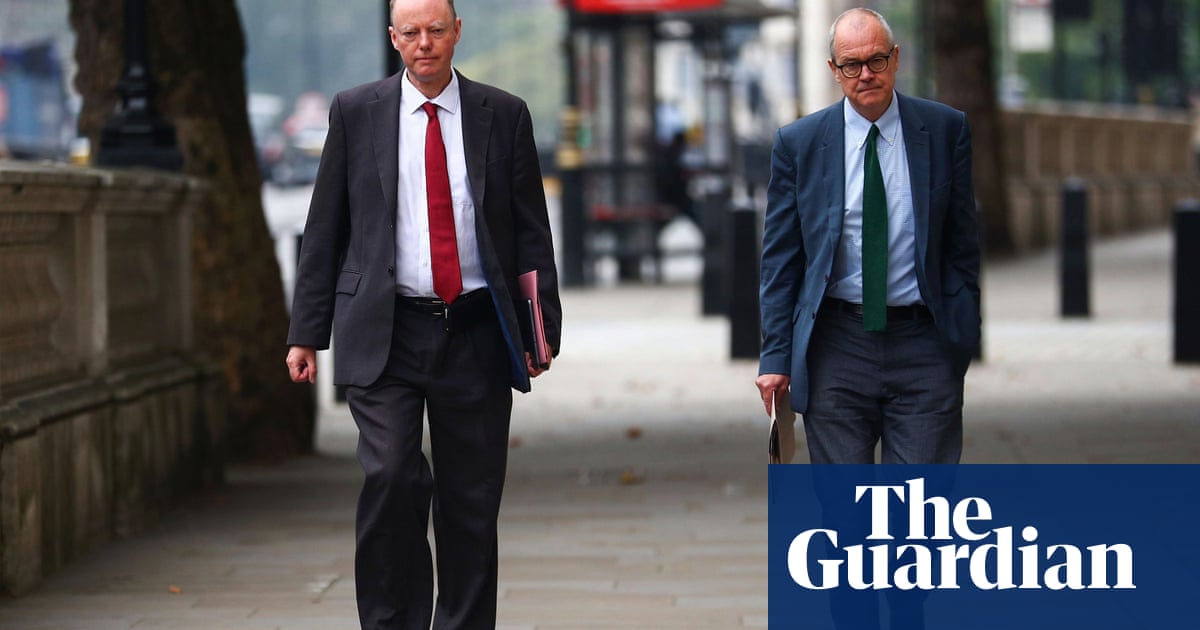 The UK has “turned a corner” and is on course for up to 50,000 new cases of Covid-19 per day by mid-October, which could lead to 200 deaths a day by the following month, the government’s chief medical adviser has warned.

The country should be prepared for significant restrictions for the next six months, over the winter period where the virus can be expected to flourish, Dr Chris Whitty said.

Whitty said mortality rates from Covid-19 were “significantly greater” than seasonal flu, which killed around 7,000 annually or 20,000 in a bad year.

“This virus is more virulent than flu so the numbers people talk about are not unreasonable numbers for us to be thinking about,” he said, and while treatment was better it could not take mortality down to “trivial” levels.

Whitty, speaking at a media briefing alongside the chief scientific adviser, Patrick Vallance, said: “If this continues along the path, the number of deaths directly from Covid could rise on an exponential curve, and you can move from small numbers to really very large numbers.

“We have in a bad sense, literally turned a corner, although only relatively recently. At this point, the seasons are against us, we are now going into the seasons, late autumn and winter, which benefit respiratory viruses and it is very likely they will benefit Covid as they do flu.”

Whitty said the resurgence of the virus should be seen as “a six-month problem that we have to deal with collectively”. He said it would not be an indefinite problem and that “science will in due course ride to our rescue” – a hint at the progress of a vaccine.

“But for the next six months we have to realise that we have to take this collectively very seriously,” he said. Whitty said there was “no evidence” that the new resurgence was a milder form of the virus.

Vallance said the epidemic was doubling “roughly every seven days” and said government modelling showed that would mean around 50,000 cases per day by mid-October. That in turn, would lead to 200 deaths per day by mid-November.

“There is a simple message – as the disease spreads, across age groups, we expect to see increase in hospitalisation … which will lead to an increase in deaths,” he said.

Vallance said there had been an increase in positive cases across all age groups, which was not down to increased testing.

Citing the ONS, study he said that it was now estimated that roughly 70,000 in the UK have a Covid infection and around 6,000 a day are getting the infection.

He said being infected with Covid previously was “not an absolute protection” and the vast majority of the population was not immune. The antibody response “fades over time” he said, pointing to some cases of reinfection.

No questions were permitted after the statement from Whitty and Vallance but a statement from the prime minister is expected on Tuesday, laying out any further restrictions and enforcement for the coming months.

One option understood to be under discussion is urging office workers to stay at home, but curbs on restaurant opening hours and new limits on social mixing appear more likely.

The health secretary Matt Hancock will give a statement to the House of Commons on Monday afternoon – and hinted that restrictions were likely to be on social gatherings rather than on offices or public transport.

“The really sad thing about this virus is that it thrives on the things that make life worth living, socialising, when people get close to each other, that’s when it tends to pass on and so we have got to be careful about that,” he told ITV’s This Morning.

“There are parts of the country already where you cannot socialise with people outside your household. I know the impact this has on people. I know this is not how anyone wants to live their lives.”

Asked whether people would be drinking in the pubs in England this weekend, Hancock said: “It’s not a no, and it’s not a yes, we’ve been working on this all weekend, we haven’t taken the final decisions about what we want to do in response to the surge that we’ve seen in the last two weeks.”

More than 13 million people in northern England, the Midlands, Scotland and Wales are already facing some form of local lockdown, and the mayor of London, Sadiq Khan, has urged ministers to consider more restrictions for London.

New analysis by Sage (the Scientific Advisory Group for Emergencies) on Friday suggested the capital may be just days behind behind northern towns and cities that have experienced a resurgence in the virus.