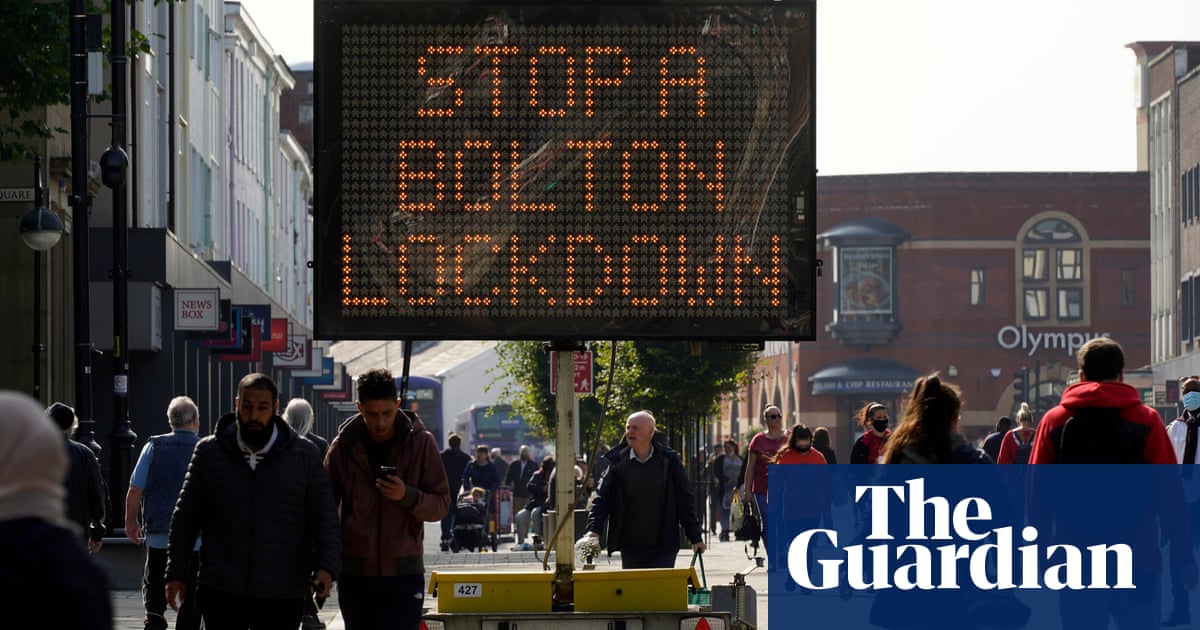 A holidaymaker who did not self-isolate after returning from a trip abroad was partly responsible for the “extreme spike” in coronavirus cases in Bolton, its council leader, has said.

Greenhalgh said the area’s high rate had been linked back to pubs in the town and a “cohort of people” who refused to follow the guidance.

The Conservative councillor told BBC Radio 4’s Today programme: “We had somebody who did not adhere to quarantine, did not stay the 14 days, literally went on a pub crawl with a number of mates.”

He said the person, who tested positive two days after the night out, had visited a number of premises which led to “a large number of individual transmissions”.

Bolton is subject to tougher measures than the rest of England, with hospitality venues only allowed to operate as takeaways and ordered to shut by 10pm.

Council leaders in other areas facing new coronavirus lockdown restrictions in a an attempt to curb a rise in coronavirus cases have criticised the government for its “drip-feeding” of information on the new rules.

Some questioned why the government chose to announce the new restrictions, which do not come into force until Tuesday, before the weekend, citing concerns people might “let loose” in city centres while they still can.

The rules will prohibit millions in Lancashire, Merseyside, and parts of West Yorkshire, the West Midlands and Cheshire, from socialising with those outside of their support bubble in private homes and gardens. Leisure and entertainment venues will be closed between 10pm and 5am to try to tackle rising coronavirus cases.

Nearly 4.7 million people will be affected by the new restrictions.

The Labour MP for Halifax, Holly Lynch criticised the government’s approach to announcing the new rules.

She tweeted: “I am increasingly worried that the drip-feeding of this incredibly important information through Twitter [and] other channels over the course of Fridays is compounding the confusion [and] anxiety people are feeling.”

In Liverpool, Joe Anderson, the city’s mayor, questioned why new restrictions for the city and wider region will not be brought in until Tuesday despite coronavirus cases soaring.

He told the Liverpool Echo he was worried people may choose to “let loose” for one final weekend before the new rules come in, which could have a devastating impact on the already surging infection rate in the city.

He said: “I think it just shows once again how out of touch the government is with people, they make it up as they go along. We have no idea why they are waiting until Tuesday for these measures to be brought in, our infection levels are really high now.”

The leader of Kirklees council, meanwhile, said he would ask the government to reconsider implementing the new rules, saying the frequent changes in guidelines could impact their effectiveness.

Shabir Pandor said: “It’s an incredibly tough sacrifice to have to make. We’re also concerned that frequent changes in restrictions could have a serious impact on the effectiveness of them, but also people’s mental health.”

Dr Arif Rajpura, the director of public health for Blackpool, which has been excluded from the new restrictions, told Sky News the government may be left with “no choice” but to enforce a temporary two-week “circuit breaker” of increased nationwide restrictions to tackle a second wave of coronavirus.